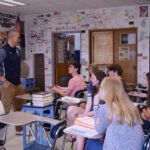 The deepest ocean teems with life, but not as we land-dwellers know it.

There are crabs that farm bacteria on their claws, swishing them repeatedly to expose the bacteria to nutrient-rich water; tube worms grown to massive proportions; and bioluminescent creatures that bear their own light through the darkness.

The life of the deep is foreign to the sun-soaked world above, built on chemicals — mainly hydrogen sulfide — belched from deep in the Earth. Chemosynthetic bacteria convert those chemicals to organic matter to be eaten by larger creatures, forming the base of the food chain.

The Harvard Museum of Natural History (HMNH) is casting light on this dark world through the paintings of artist Lily Simonson and the science of deep-sea biologist Peter Girguis.

“Lily Simonson: Painting the Deep,” set to run through next June, is a collection of six massive works that literally glow with Simonson’s depiction of deep-sea environments. Highlighted with luminescent paints and hung on dark walls, the canvases are accompanied by an oceanic soundscape.

“I love to paint really big,” Simonson said. “Rather than bringing these bizarre things into our world, my goal is to bring the viewer into the bizarre world. I wanted to make the viewers feel they were transported to the bottom of the ocean.”

Simonson has firsthand experience, having twice taken deep dives in her collaborations with scientists. The journeys have had a dramatic impact on her work, she said.

“There’s such a richness in the colors, this range of dark, rich blacks and browns that doesn’t get picked up in video cameras or in photos. Having the opportunity to see that for myself and then be able to translate it into a painting opened up this whole other realm where I felt that I could share the environment with my viewers.”

Girguis, a professor of organismic and evolutionary biology, has made space for Simonson on two research cruises in the last year and half, with another planned for the fall. He sees her art as an effective way to connect non-scientists with important science. It has also altered his own perspective, he noted, even on creatures and environments he’s visited and photographed numerous times.

“Every time I’ve had the privilege to work with Lily, I always see something of the study subject I didn’t see before,” Girguis said.

The stark dividing line humans draw between art and science isn’t mirrored in nature, Girguis said, insisting that beauty and mystery are no less essential to a creature than the workings of its anatomy or its ecological niche. Before the advent of sophisticated cameras and video-recording gear, globe-trotting naturalists doubled as artists, conveying and detailing their discoveries through drawings. Simonson’s work is an extension of that tradition, Girguis said.

Simonson, who holds a bachelor’s from the University of California, Berkeley, and an M.F.A. from UCLA, began collaborating with oceanographers 12 years ago, visiting labs to find specimens to use as models in her paintings.

She met Girguis in a 2013 at a conference where she gave a talk on scientific outreach to the public. The Harvard scientist invited her to present at a later conference and then to join an expedition. 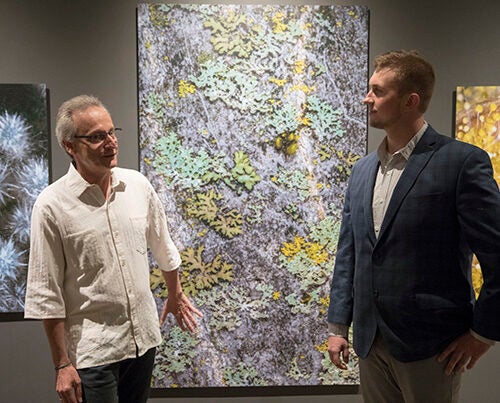 Harvard scientists capture microbes in all their beauty

“It’s a very natural alliance between us,” Simonson said. “He’s a great storyteller and he’s passionate about what he does. He’s also into sharing the joy of discovery and doing that in a variety of ways.”

Jane Pickering, executive director of the Harvard Museums of Science and Culture, of which HMNH is part, said that the exhibit helps the museum achieve one of its central goals: presenting the work of Harvard scientists to a broader audience. The paintings have received an enthusiastic response, Pickering said, judging by comments to staff and the fact that the catalog for the exhibition — which opened June 30 — is already sold out.

“We want people to understand the deep sea and also see how amazing it looks,” she said. “It’s very important to us to help people appreciate the wonder and beauty of life on our planet.”