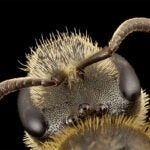 Harvard scientists capture microbes in all their beauty

Humans find validity in the tangible — what we can see, hear, and touch becomes real. But some of the most essential, and even most beautiful, components of life on this planet cannot be seen by the naked eye.

Now, two Harvard University scientists have captured and brought to light the “invisible,” and stunning, life force everywhere around us: microbes. Deeply inspired, the researchers have concentrated their work on life-forms of the microbial world, which have a defining role in our evolution.

“There is intrinsic beauty in the way we can talk about microbes and the microbial world, and that beauty is quite useful for people to learn,” said Roberto Kolter, Harvard Medical School (HMS) professor of microbiology and immunobiology and co-director of Harvard’s Microbial Sciences Initiative. “When it comes to science communication sometimes people do not recognize the power of beauty, which offers knowledge and learning through curiosity. Microbes can be portrayed in a beautiful way.”

Kolter, head of the HMS Kolter Lab, and his colleague Scott Chimileski, an HMS research fellow, communications director for the Microbial Sciences Initiative, and a microbiology photographer, worked for the last three years on the scientific exploration of microbes. The result was their book, published in September, “Life at the Edge of Sight: A Photographic Exploration of the Microbial World.”

Filled with remarkable photographs of bacteria, archaea, fungi, and other microscopic creatures, the book chronicles the history and significance of the relatively new study of the life-forms that are billions of years old, but were only discovered 300 years ago.

“Most of the biodiversity on Earth is microbial, both now and going all the way back to the origin of life. But because we are not born with the ability to see most microbial cells, the imagery is particularly important,” said Chimileski, who created most of the photographs and illustrations in the book. “By sharing these snapshots, we can give people the ability, even if they can’t see microbial cells in their surroundings, to imagine them, to imagine and see the microbial world. It’s always there and not going anywhere.”

Blending art and science, Kolter and Chimileski turned their unique fascination with the microbial world into an exhibition at the Harvard Museum of Natural History (HMNH.) The “World in a Drop: Photographic Explorations of Microbial Life” exhibition now on display conveys the wonder of microbes as a living entity — intricate, colorful, and multidimensional. The large-scale, detailed images highlight the delicate beauty of this biological phenomenon that exists, literally, everywhere.

Their work dynamically expounds upon the discoveries of Antonie van Leeuwenhoek, who first revealed microscopic organisms after the invention of the microscope in the late 1600s. That was considered the birth of microbiology, or the “invisible” universe of living things. It was not until the late 19th century that scientists began focusing on the disease-related aspect of bacteria.

“When we discovered that germs cause disease, never was knowledge shared in a broad way that the few that cause disease are an extremely small minority,” said Kolter. “But knowledge is enlightening and the information we now have is helping to change the view of microbes.”

Kolter and Chimileski hope that by showing microbes artistically, some of the deep-rooted fear of bacteria will be eliminated and people will come to understand that the basic structures of these entities have intrinsic similarities to all life forms, and even to the structure of the universe.

This concept, and the history of microbial science, were shared in a public lecture, “Wonders of the Microbial World,” last week at HMNH. More than 300 people came to hear about the relevance of Kolter and Chimileski’s work both to science and to humanity.

Using provocative images from the book and the exhibit, they showed how bacteria and fungi are a major force in the forest, helping drive its ecosystem; and how a semi-intelligent slime mold found on fallen leaves forms networks, makes decisions, and learns new behaviors as it searches for food. They revealed colonies of fungi known as koji, which help make fermented foods like soy sauce; and how bacteria from the genus Streptomyces form into colonies, producing droplets containing antibiotics that they called “nature’s medicine-makers.”

“Almost every microbiologist at HMS is trying to kill microbes, and Roberto celebrates them,” said Professor Jon Clardy of the Department of Biological Chemistry and Molecular Pharmacology in his opening remarks. “He doesn’t like to have pictures of just a single bacterial cell. He likes to have lots of cells and organized structures, cells of different kinds, of very different things, and those can make for some striking images.”

“Scott and Roberto make an extraordinary team, and have excelled at bringing an incredibly artistic view of science and a new appreciation for the world around us to a larger community, through their recent book and their exhibition at the HMNH,” said Lydia Morrison, technical writer at New England Biolabs.

Jane Pickering, the executive director of the Harvard Museums of Science & Culture, called “World in a Drop” an innovative exhibition.

“Roberto and Scott’s images are so stunning and so beautiful that you are drawn into what microbial life is, and why it is important,” she said. “One of the major priorities of our museums is to interpret and present the research going on at Harvard University, and bring that research to a wide audience. So, we have two groups of creative people on the campus thinking about how we can interpret this important topic in a way the public will both enjoy and learn from it.”

“World in a Drop” is a precursor to a broader exhibition, “Microbial Life,” opening in February 2018. Chimileski said presenting this work at the HMNH makes perfect sense, because the natural history of the planet is mostly all microbial.

Some of Scott Chimileski’s work can also be seen on display at “Scale: A Matter of Perspective” through Dec. 9 at the Harvard University Special Exhibitions Gallery, Science Center 251.

“World in a Drop: Photographic Explorations of Microbial Life” is on view at the Harvard Museum of Natural History through Jan. 7, 2018.

Harvard Museum of Natural History educators, Harvard researchers, and the Art+Bio Collaborative will investigate the world of microbes through observation, stories, and art explorations at the Microbes Mini Festival, Nov. 12, 1–4 p.m., at the HMNH.