The Harvard-Yenching Library, by the numbers 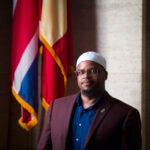 140 years, 1.4 million volumes, and the most comprehensive collection for East Asian studies in the Western world

With 1.4 million volumes in more than a dozen languages, the Harvard-Yenching Library has become the third-largest library at Harvard, after Widener and Harvard Law School’s. It is also the largest academic library for East Asian studies in the Western world.

Its most prized pieces are found on the third floor of the red brick building on Divinity Avenue, in the special collections office and rare book reading room. There, students and the curious can find comprehensive coverage of history, language and literature, philosophy and religion, and fine arts, as well as archival materials, manuscripts, prints, photos, scrolls, and rubbings in Chinese, Japanese, Korean, Vietnamese, Western languages, and minority languages such as Manchu, Mongolian, Tibetan, and Naxi.