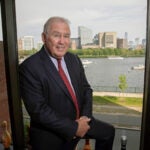 After a national search, Jake Kaufmann ’93 has been appointed the next Griffin Director of Financial Aid, effective July 16. He will succeed Sally Donahue, who is retiring after 36 years of serving Harvard.

“Jake brings to this role strong expertise in the rapidly changing field of financial aid and years of Harvard experience supporting our students and their families,” said Dean of Harvard Admissions and Financial Aid William Fitzsimmons, who announced Kaufmann’s appointment. “He, along with the Griffin Financial Aid Office, will continue to play a crucial role in ensuring that Harvard continues to attract and retain the most talented students.”

Kaufmann has been associate director of financial aid and senior admissions officer since 2005. He will take the reins of a generous financial aid program that has grown by more than 250 percent since 2000, and has been transformed by a number of significant initiatives, most importantly the Harvard Financial Aid Initiative (HFAI), which seeks to increase low- and middle-income students’ awareness of Harvard’s affordability.

In recognition of his historic gift to Harvard College, Harvard renamed its financial aid office in honor of Ken Griffin ’89 in 2014. In February of that year, Griffin made a gift of $150 million to the University, principally supporting need-based aid for undergraduates. In addition to the office, the director of financial aid position was also named for Griffin.

“I’m grateful for Sally’s extraordinary work over the years to ensure Harvard’s gates remain open to the world’s brightest students, irrespective of financial means,” said Griffin. “I look forward to the Office of Financial Aid’s continued impact under Jake’s leadership.”

Admissions applications have more than doubled since the inception of the HFAI program in 2004, and Harvard has seen a 30 percent increase in the number of students from lower-income families in the College. Since launching HFAI, Harvard has awarded nearly $1.8 billion in grants to undergraduates, and the undergraduate financial aid award budget has increased more than 131 percent, from $80 million in 2005 to more than $185 million last year. Further, Harvard’s net-price calculator, of which Kaufmann led the development, makes it easier for families to get a sense of the College’s affordability.

Thanks to the generosity of donors and the Faculty of Arts and Sciences’ core commitment to keeping education affordable for every undergraduate, Harvard costs the same or less than most public universities for 90 percent of American families. More than half of Harvard students receive need-based financial aid, and the average grant is $53,000. No loans are required. Families with incomes up to $150,000 and typical assets pay 10 percent or less of their annual incomes. Families with higher incomes receive need-based aid depending on individual circumstances.

As associate director of financial aid and senior admissions officer, Kaufmann directed the financial aid application and awarding process for prospective students, chaired a regional subcommittee, has been an area representative for international admissions, and has served as the ROTC and veterans’ liaison for financial aid.

Kaufmann earned an Ed.M. from Harvard’s Graduate School of Education in 2005. Prior to returning to Harvard, he was a consultant with Bain & Company/The Bridgespan Group, and began his career at the Roxbury Latin School, where he taught math and science, served as dean of the seventh grade, and was the director of theater.

Donahue announced her retirement in January, after 18 years in the financial aid role. She was the College’s first Griffin Director of Financial aid and senior admissions officer.

“Sally has been an integral part of the University, and she has made a significant difference in the lives of countless students and their families during her career,” said Fitzsimmons. “The prospect of Sally leaving as a colleague and friend is difficult, as her love for the College and our undergraduates is infectious. We wish her all the best in to the future.”