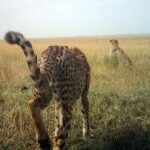 Deep into the wild

NASA’s Transiting Exoplanet Survey Satellite (TESS) launched in April. After calibration and testing of instruments, the telescope will train its cameras on Earth’s stellar neighborhood and begin its primary task of scanning for Earth-like planets orbiting nearby stars. As TESS science program director, David Latham, an astronomer at the Harvard-Smithsonian Center for Astrophysics, will oversee follow-up studies of planet candidates. We spoke to him about the science mission before its official start this month.

GAZETTE: TESS launched in April. Has there been a definitive date set for the start of the science mission, or is it the kind of thing that you ease into?

LATHAM: We are in what’s called “commissioning,” or calibrating the performance of the cameras on the TESS spacecraft. We’re adjusting the way the fine-pointing of the spacecraft works, so that we get sharp images. To see the first images coming down and see that the optics are working, the cameras are working — it’s pretty damn exciting. And short exposures look great. One was released to the public a couple of weeks ago.

GAZETTE: That was the one of the very dense star field?

LATHAM: Yes, but we have to make sure that the spacecraft doesn’t jitter too much; we want to keep those images sharp. That’s being fine-tuned and there are additional tests still coming up. We’ll [start the science mission] when we’ve fully understood the performance of the spacecraft and have it working the way that we want it to work.

GAZETTE: So it’s not a set date, but rather a stage of preparation that you move into.

LATHAM: Yes, and it will be at one of the close passages to the Earth, the perigee of the orbit.

TESS has this elongated orbit. It goes out to the distance of the moon, 60 times the radius of the Earth, and then gets as close as 14 times the radius of the Earth. It’s a very nice orbit for a number of reasons. When you’re closest to the Earth, the transmission to the deep space network is more efficient. Then for the rest of the 13.7-day orbit, we can stare at one location in the sky, pretty much anti-sun — you want to keep the sun on your back — illuminating the solar panels and not getting too much scattered light into the telescope. This lunar resonant orbit allows us to continuously monitor one sector of the sky, and after a month, roughly, we move on to the next sector and do what looks something like an orange peel around the sky.

GAZETTE: And eventually TESS will get the whole sky, over two years.

LATHAM: That’s right. The southern hemisphere was selected for the beginning year and the north for the second year. 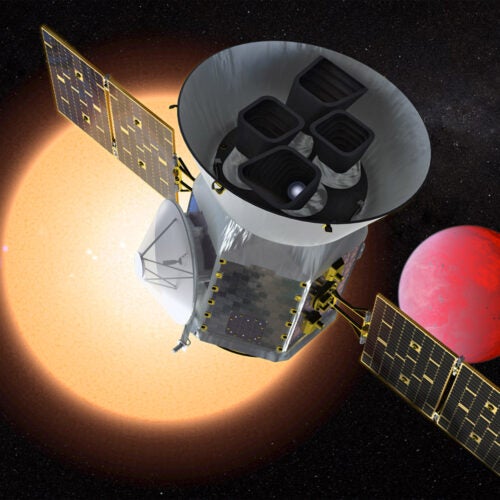 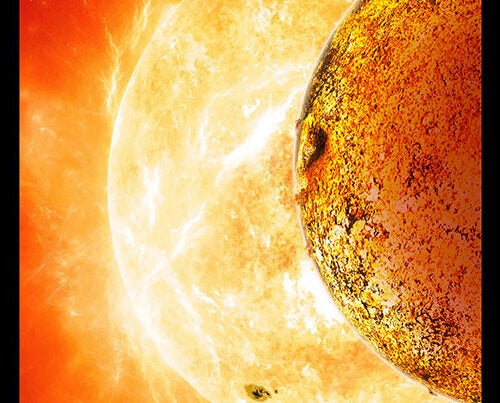 GAZETTE: What do your duties entail as director of science of the mission?

LATHAM: Our main job — the reason why I wanted to do this mission in the first place — is the follow-up observations of the most interesting planet candidates, to make sure it has the right amount of gravity to be a planet.

Mostly we’re chasing smaller planets. We really want to find planets that are similar to the Earth, with rocky surfaces, and maybe a secondary atmosphere, not the original atmosphere of elements like hydrogen and helium, but molecules that might have been accumulated from volcanic exhalations, things like carbon dioxide and methane.

So, in the follow-up observations, we’re going to try to pinpoint planets that are rocky and not too different in size and temperature from the Earth. We want to identify planets that might be good targets for the James Webb Space Telescope [whose launch is expected in 2020], which should be able to identify molecules in the atmospheres of planets. Our dream here is to characterize the atmospheres of planets not terribly different from the Earth.

We’ve been doing some of that already for gas giant planets, both from space, with the Hubble Space Telescope and the Spitzer Space Telescope, and from the ground, with giant telescopes. But James Webb will be even more powerful.

GAZETTE: And TESS is the first step to that?

LATHAM: That’s right — we’re the finder. We identify the potential targets for follow-up and figure out which ones really are best-suited for these space missions and giant telescopes to work on in the future. And since we’re going to cover nearly the whole sky, we’re going to kind of drain the lake — we’re going to find all the good targets on which people will work in the future.

GAZETTE: How will the science mission’s follow-up occur? Will you see the raw data from TESS and pick out the planets for follow-up? Or are you going to get a pre-screened list and then distribute candidate planets to different facilities?

LATHAM: Cameras on TESS monitor the light from thousands of stars in each sector. We have a couple of teams that are going to process the raw data and generate light curves from them. They look for “dimmings,” and if they find any that are periodic — more than two or three dimmings — those are quite interesting, those are the candidate light curves they’ll send to the team here in Cambridge, at MIT and the CfA.

We’ll use various tests to figure out whether it’s a good candidate planet, doing additional follow-up, using spectrographs and other tests to make sure we aren’t being fooled. There’s a network of facilities around the world that have joined in this program and one of our jobs is to coordinate the efforts of all these people so that we get the most efficient follow-up, ultimately, and selection of the best targets for the efforts to study atmospheres.

GAZETTE: Do we have any idea of how many Earth-like planets we might find in this mission?

LATHAM: Not very many that are truly Earth twins. We’re going to find planets that are similar to the Earth, though a bit bigger because they are easier to detect. They’re larger and so block out more light, and have more mass and so pull harder on their parent stars, which is what we measure with our spectrographs. And they may also be around smaller, cooler stars, which are very plentiful in the sky.