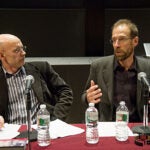 Kepler-78b is a planet that shouldn’t exist. This scorching lava world circles its star every 8½ hours at a distance of less than 1 million miles — one of the tightest known orbits. According to current theories of planet formation, it couldn’t have formed so close to its star, nor could it have moved there.

“This planet is a complete mystery,” said astronomer David Latham of the Harvard-Smithsonian Center for Astrophysics (CfA). “We don’t know how it formed or how it got to where it is today. What we do know is that it’s not going to last forever.”

Not only is Kepler-78b a mystery world, it is the first known Earth-sized planet with an Earth-like density. Kepler-78b is about 20 percent larger than the Earth, with a diameter of 9,200 miles, and weighs almost twice as much. As a result it has a density similar to Earth’s, which suggests an Earth-like composition of iron and rock.

According to Latham, Kepler-78b is a member of a new class of planets recently identified in data from NASA’s Kepler spacecraft. These newfound worlds all orbit their stars with periods of less than 12 hours. They’re also small, about the size of Earth. Kepler-78b is the first planet in the new class to have its mass measured.

“Kepler-78b is the poster child for this new class of planets,” Latham said.

The team studied Kepler-78b using a newly commissioned, high-precision spectrograph known as HARPS-North, at the Roque de los Muchachos Observatory in La Palma, Calif. They coordinated their work with a second, independent team using the HIRES spectrograph at the Keck Observatory. The teams’ measurements agreed with each other, increasing their confidence in the result.

Kepler-78b is a doomed world. Gravitational tides will draw it even closer to its star. Eventually it will move so close that the star’s gravity will rip it apart. Theorists predict that Kepler-78b will vanish within 3 billion years.

Interestingly, our solar system could have held a planet like Kepler-78b. If it had, the planet would have been destroyed long ago, leaving no signs for astronomers today.