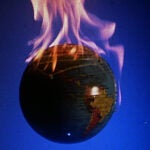 Elisa New is used to being asked about celebrity.

Even before the Powell M. Cabot Professor of American Literature launched the television part of her multimedia initiative “Poetry in America” in April, New had hip-hop artist Nas reading Walt Whitman and Pritzker Prize-winning architect Frank Gehry reading Carl Sandburg in her online Extension School course, “Poetry in America for Teachers: The City from Whitman to Hip Hop” (created in part with a faculty fellowship from the Derek Bok Center for Teaching and Learning).

For the television series, presented by WGBH Boston and distributed by American Public Television, she reaches further, sitting down with the likes of Bono, Bill Clinton, and Shaquille O’Neal for in-depth discussions of one poem in each 24-minute episode.

“Celebrities?” Sitting in a conference room down the hall from her Vanserg studio, New muses on the word. “I think of them as readers, as poetry readers. Whether that person is Bono or a first-year design student at the New School, a deliveryman, or Herbie Hancock, two humans beings sitting across the table from each other with a powerful text between them are bound to a kind of intellectual adventure.” That adventure, says the author of “New England Beyond Criticism: In Defense of America’s First Literature,” is the heart of “the experience of the liberal arts classroom.”

Fame doesn’t matter, she says, because it gets stripped away in the face of poetry. Reading these works, “they show themselves,” said New. “They show who they really are, and this is really moving to me.”

She cited the example of former Vice President Joe Biden, who teared up while reading Robert Hayden’s “Those Winter Sundays” about fatherhood. Or O’Neal, who at first appeared to consider his appearance, reading Edward Hirsch’s “Fast Break,” to be “a kick,” as New put it. “Then in the middle of it he discovers, ‘Oh, it’s more complicated.’ And he has to reckon with the experience.”

Such, said New, is the “democratizing, human power” of poetry. “We know it’s Bill Clinton who is sitting there, and the person who comes next is an 11-year-old, but they kind of say the same thing,” she said.

The series, which was five years in the making and begins broadcasting in New York this Sunday, relies as much on New’s scholarship and Harvard’s resources as on its star power. “The deeper the knowledge the better,” she said. For an episode in which actress and politician Cynthia Nixon read Emily Dickinson’s “I cannot dance upon my Toes,” for example, the show explored the Harvard theater and dance collection. As Nixon, who played the poet in the film “A Quiet Passion,” read, her voice was paired with video of dancer and choreographer Jill Johnson and prints of ballerinas who were Dickinson’s contemporaries. “We went to the archives of the 1840s and 1850s,” said New. “Who knows what the last time was that anyone went into this box?”

For New, what has been enlightening about this experience is not so much the universal power of poetry — that’s a given — but how a new medium can extend her range.

“What I’m trying to do with TV is to bring 35 years of what I’ve learned of what’s powerful in the classroom,” she said. Her experience with the television show, as well as her online course, also fed back into the classroom as she relaunched her Gen Ed course “Poetry in America” this past year, using a blended format that includes video and innovative multimedia.

“There is a world out there that cares very deeply about the humanities, and we really need to serve that world,” she said. With her newly enlarged multimedia, multifaceted toolkit, “I think of myself as training the humanists of the future.”

To learn more about the Poetry in America series, and to stream additional episodes, please visit:  http://www.poetryinamerica.org/tv-series/.