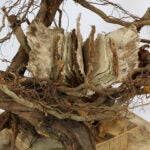 Approaching 60, Michael Pollan, professor of the practice in Harvard’s creative writing program, turned his journalistic skills and late-in-life curiosity to psychedelics. His new book is “How to Change Your Mind: What the New Science of Psychedelics Teaches Us About Consciousness, Dying, Addiction, Depression, and Transcendence.”

Pollan, whose well-known earlier titles include “The Omnivore’s Dilemma,” conducted significant research for the new book while he was the Suzanne Young Murray Fellow at the Radcliffe Institute for Advanced Study in 2015‒16, and he credits recently graduated Theodore Delwiche ’18 for uncovering rich material in the library archives.

Pollan spoke to the Gazette about Harvard’s own place in the history of psychedelics, new studies that experiment with clergy, and the importance of “tripping” in a safe setting.

GAZETTE: You did a significant amount of historical research while here as a Radcliffe fellow two years ago. What did you find?

POLLAN: One reason I wanted to come to Cambridge was I knew there were important archives and the story of Timothy Leary and the Psylocibin Project is an important chapter in the history of psychedelics, partly because it catalyzed the backlash and aborted a lot of the research. Some of Leary’s contemporaries are still around. I interviewed people who were in the (former) Department of Social Relations with him. They are quite elderly now, but have clear memories of this episode. It was really useful in putting together that picture. I had this wonderful research assistant who I mention in the acknowledgements. He was a Crimson reporter, a dogged researcher. He would call me and say, “I’m in the so-and-so archive, and they tell me I’m the first undergraduate to ever come here.” We couldn’t get everything. They have personnel files that they have the option of keeping sealed for 80 years.

GAZETTE: You don’t get in depth about Leary until halfway through the book, but there are so many other important Harvard voices, even one unsung in Richard Evans Schultes. What was his contribution?

POLLAN: Schultes is as important a figure in the history of this work. He’s the one who really helps Gordon Wasson, points him in the direction of southern Mexico to find the mushroom cult. Schultes is a much more interesting figure in the history of psychedelics. He was a serious researcher; he spent a lot of time in the Amazon. He tried a lot of these substances there. He supposedly had a basket full of peyote in his office for office hours as well as a blowgun that he would demonstrate for students. He had a big influence on the whole story.

And then Harvard has yet another role in William James and his work in “Varieties of Religious Experience” on the mystical experience. His conceptualizing of that idea has really shaped a lot of the research, and the kinds of questions that are asked, and the kinds of surveys that are done after the experience. So, yeah, Harvard has a deep, rich history in psychedelics that it should wear with pride, especially as the image changes and we see psychedelics more as an interesting tool for both understanding and healing the mind. It won’t be so embarrassing to be associated with it in a few years.

GAZETTE: Is that why Leary’s part of the story doesn’t show up until halfway into “How to Change Your Mind”?

POLLAN: I think the Leary story is fascinating, but I thought the ’60s was the history of psychedelics — the history of counterculture, Leary, Ken Kesey (author of “One Flew Over the Cuckoo’s Nest”), acid tests, the Summer of Love — but, in fact, that’s just one, very brief chapter in a much longer and richer story I wanted to make people see. There was a very rich history of research going on before Leary. Leary came late. He was such a great self-promoter that he made people believe it began and ended with him. It neither began nor ended with him. But he definitely bears some responsibility for catalyzing the backlash that stopped the research.

POLLAN: Yes, I think so. I think what happened in the ’60s was very special to the ’60s. The drugs were new. So few people understood them, and they were disruptive, and you had a situation where the young were taking something the old didn’t understand or know anything about and found quite threatening. That won’t happen again because now many of the people in charge have experienced psychedelics. I have no doubt that the FDA regulators who are looking at results of Phase 2 trials and will be looking at the results of Phase 3 trials, many of them have had experiences with psychedelics, so they’re not as frightened by them. They know the territory a bit. I think society has changed in a way that embraces these drugs if they prove out — and that’s a big if — as an important therapeutic tool.

The kind of backlash we see is much less likely to occur the same way. You could have problems. Something bad could happen in one of these trials or outside of these trials that could cause another moral panic. But I just think when you talk to people in the psychiatric establishment, there’s not that sense of foreignness or weirdness that you had in the ’60s.

GAZETTE: In your personal experimentation, you completed the experience by taking the Mystical Experience Questionnaire (that drew on James’ work). When it comes to psychedelics, do you need to take the spiritual with the scientific?

POLLAN: Not necessarily, but things get interesting when you do. I was someone who hadn’t had a powerful spiritual experience. I tend to have more of a scientific world view, and I thought those two things were opposed to one other. But one of the most interesting things in this research is that they not necessarily opposed, and there is a scientific investigation of spiritual that is possible. There’s a study underway now to give the drugs to religious professionals — ministers, rabbis, imams, and so forth. We now have a tool to reliably occasion a spiritual experience. That makes it possible to study the phenomenon scientifically. For me, it offered an opportunity to explore a dimension of existence I hadn’t put much stock in. I had just found the idea of a mystical experience kind of implausible; I no longer feel that way. I’ve redefined spirituality for myself. It’s not about access to the supernatural. It’s about establishing a connection to a larger entity, whether nature or the universe or the human community, that in ordinary times our ego stands in the way of.

GAZETTE: You experimented using underground guides and following specific protocols. Can you talk about why set and setting were a critical part of the experience?

POLLAN: It’s important that people understand what’s different about the way the experience unfolds in these clinical settings and even these underground settings. Erase the image of dropping a tab of LSD and going to a Grateful Dead concert. These experiences are carefully controlled and guided by a therapist — someone is with you the whole time. You’re lying down on a comfortable couch, wearing eyeshades, which makes you turn inward.

As you get older, it’s harder to give up control. You’re only ever going to allow that to happen if you feel safe, and that’s what the guides do — create a safe space. I’m not someone who surrenders easily. I had to overcome reluctance and had sleepless nights before every journey. I came to see this was my ego defending itself, trying to stay in command. But because I had such confidence in the guides I was working with, I was able to surrender and accept the dissolution of self or ego. The guides help you understand you have to move toward even the things that seem scary, and not to resist. That’s where the wisdom lies.