Time off from Harvard helped her thrive 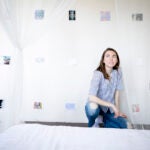 Her app for a socio-medical goal: Anthropology without borders

For Blessing Jee, one of the best things about her Harvard education was putting it on hold.

Jee knew when she arrived that she would take time off from her studies. What she didn’t expect was that it would make her “fall back in love with Harvard” — and set her, newly energized, on her future path. When she graduates in May, Jee will take another break before returning to pursue public interest law at Harvard Law School.

“Harvard has been my home. Now I have the skills and the ability to make more homes and new homes in different places,” said Jee, who when she was 2 moved from Seoul, South Korea, to Kentucky, and moved again, when she was 7, to the Los Angeles area. “I am excited to leave and explore and be in the world again.”

Jee, a sociology concentrator, credits her parents with helping inspire her interest in social justice work. Her father, a Methodist minister, took part in democratization movements in Korea in the 1980s, and Jee considers her mother her “first philosophy teacher” and feminist role model.

Jee’s activism took shape in high school where she remembers demonstrating after the death of Trayvon Martin and helping stage a sit-in to protest school budget cuts that led to teacher furloughs. Growing up in a minority-majority city, Jee felt attuned to “social dynamics and to diversity and race in America.” She said that understanding has prompted her to always “be aware of who is in the room who is not in the room, who is at the table who is not at the table.”

“At Harvard, I have always thought about who’s not here, whose voices are not being heard,” said Jee, co-founder of the Asian American Women’s Association, and a student mentor to incoming freshmen and current College sophomores.

Jee followed her older sister, Haemin, to Cambridge, based in part on Haemin’s advice that at Harvard she would make friends for life, be challenged intellectually, and find opportunities she could never imagine. “And that was it,” said Jee, who started at Harvard in 2013, when her sister was a senior. Haemin had another critical tip:

“She said her biggest regret during her Harvard time was not taking a year off. It just rang true with me, and it was just so exciting that was even possible during college — the ability to go out and do something that’s different and then come back and recharge and have a different outlook with those new experiences behind me.”

So, in 2015-16, Jee worked first for the nonprofit Sunlight Foundation as a policy intern, researching federal regulations regarding campaign finance reform. In the spring, she was a law clerk for the L.A. District Attorney’s office investigating a high-profile case and assisting deputy district attorneys for trial. She also researched education and disability rights as part of a successful effort to help her mother’s friend who wanted her autistic son to remain in his public school.

Her year away from Harvard, said Jee, “helped me realize my passion for public service could be translated into a calling towards public interest law.”

After her junior year, a summer internship as an investigator with the Bronx Defenders, working with underserved clients, confirmed her decision that law was her next step. It also helped her begin to view forgiveness as part of the justice system. To fully process her role as a defense investigator, Jee said she needed “to allow for the possibility of forgiveness to exist between these two people, one who committed the crime, the other who was the victim.”

Her experience with the Bronx Defenders and the impressions it made have dovetailed with her recent role as a Radcliffe research partner. For the past several months, Jee has been working with former Harvard Law School Dean Martha Minow, who is writing a book about forgiveness in the law. Jee said Minow, whose work includes research into amnesty and pardons, debt relief, and child soldiers, helped her see that “forgiveness has a real place in the law and it shouldn’t be discarded just because the law should just be principled and objective.”

“Working with Professor Minow has really fleshed that out for me and given me a more nuanced view of the law I think will be helpful when I go to law school.”

Minow, the Carter Professor of General Jurisprudence and current Radcliffe Fellow, called working with Jee “joyous because of her wide-ranging interests, precise reasoning, and boundless energy and generosity. … It is unusual to find someone so powerfully able to combine deep focus and wide vision. She will bring tremendous talents to the Harvard Law School.”

What’s next for Jee is another break from school. She applied and was accepted her junior year to Harvard Law School’s deferral program, which admits students early with the stipulation that they work for two years before enrolling. She will teach English in Chile this fall with a program run by the Chilean Ministry of Education and backed by the United Nations.

Harvard, said Jee, has perfectly prepared her to step into yet another world and another home. The best kinds of homes, she said, “are the ones that equip you to leave them.”

First, she will enjoy one more Harvard milestone: graduation. It’s a day that holds a special relevance for Jee. Her junior year in high school she took part in a program for aspiring journalists sponsored by the Newseum Institute in Washington, D.C. The prominent Civil Rights leader John Lewis, this year’s Commencement speaker, was one of the program’s featured guests.

“He was one of the heroes in my high school social justice curriculum,” said Jee, who was able to ask Lewis about what he brought with him from his activist days into his political career. The longtime Georgia congressman told her the common denominator was “righteous anger” and an unyielding sense of justice. “He said at the core, it’s always about doing right for and to others,” Jee recalled.

“He made me realize social justice work could take many forms, as long as you carry with you that same spirit of justice and generosity and liberality toward man. I wrote about that in my Harvard College application and now he’s coming to speak. It’s just come full circle. And I am so excited to hear him.”