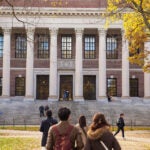 Congressman John Lewis, a Civil Rights leader who has represented Georgia’s 5th District for more than 30 years, will be the principal speaker at the Afternoon Program of Harvard’s 367th Commencement on May 24.

“For more than 50 years, John Lewis has dedicated himself to the ideals of equality and decency, standing up for what is right, even when it meant putting himself in harm’s way,” Harvard President Drew Faust said. “His public service legacy is unparalleled, and he is an inspiration to me and to countless other people across the United States and around the world.

“As president of Harvard, I have been fortunate to welcome Rep. Lewis to campus on several occasions, most memorably in 2012 when he was awarded an honorary degree and in 2016 when he joined me in dedicating a plaque on Wadsworth House in honor of four enslaved persons who lived there in the 1700s. I look forward to hearing his message at Commencement.”

Lewis, who was awarded an honorary doctor of laws degree from Harvard in 2012, was born to Alabama sharecroppers in 1940 and raised in the Jim Crow South. As a teenager, inspired by the activism of the Montgomery Bus Boycott and the words of the Rev. Martin Luther King Jr. on the radio, he decided to join the Civil Rights Movement. As a student at Fisk University, he organized sit-in demonstrations at segregated lunch counters in Nashville, Tenn. In 1961 he joined the Freedom Riders, protesting segregation by occupying bus seats reserved for whites in the South. The buses were routinely attacked by armed, angry mobs, and that summer Lewis was arrested and beaten — the first of many arrests, beatings, imprisonments, and severe injuries that he sustained during the Civil Rights era.

“John Lewis has dedicated his life to making the United States a more just and equitable society. I am sure that his courage, his compassion, and his commitment to service will inspire Harvard alumni and students alike.”
— Susan Morris Novick ’85, Harvard Alumni Association president

By 1963, Lewis was chairman of the Student Nonviolent Coordinating Committee, and one of the “Big Six” leaders who organized the historic March on Washington; he was the event’s youngest keynote speaker and is the only one still living. During Freedom Summer in 1964, he took part in voter registration drives in Mississippi. In March 1965, Lewis and fellow Civil Rights activist Hosea Williams led more than 600 marchers across the Edmund Pettus Bridge in Selma, Ala., where they were caught in a violent maelstrom of tear gas, lunging police dogs, club-wielding onlookers, and punishing fire hoses turned on full blast. Lewis was left with a fractured skull, and the event, broadcast nationwide, hastened the passage of the Voting Rights Act of 1965.

In 1977, President Jimmy Carter’s White House called on Lewis to direct ACTION, a federal volunteer agency. In 1981, he entered political life as a member of the Atlanta City Council, and five years later was elected to Congress, representing Atlanta and outlying areas. He is senior chief deputy whip for the Democratic Party in the House, a member of the House Ways and Means Committee, a member of its Subcommittee on Income Security and Family Support, and ranking member of its Subcommittee on Oversight.

A graduate of both Fisk University and the American Baptist Theological Seminary, Lewis holds more than 50 honorary degrees from universities including Columbia, Duke, Howard, and Princeton.

Lewis, who as a boy was denied a library card because of his race, is the author of several books. His trilogy “MARCH,” a graphic novel memoir written with Andrew Aydin and illustrated by Nate Powell, was a best-seller and won the National Book Award. The “MARCH” trilogy has been adopted into the core curricula of school systems across the country to teach the Civil Rights Movement, and has been selected as a first-year reading text at a variety of colleges and universities.

Lewis is the recipient of numerous awards, including the Lincoln Medal, the Presidential Medal of Freedom, and the only John F. Kennedy Profile in Courage Award for Lifetime Achievement ever granted by the John F. Kennedy Library Foundation. Last year, the Center for Public Leadership at the Harvard Kennedy School honored Lewis with the Gleitsman Citizen Activist Award for his 60-year career of advancing human rights.

“John Lewis has dedicated his life to making the United States a more just and equitable society,” said Susan Morris Novick ’85, president of the Harvard Alumni Association. “I am sure that his courage, his compassion, and his commitment to service will inspire Harvard alumni and students alike.”

As the principal speaker at the Afternoon Program on Commencement Day, Lewis will address the annual meeting of the Harvard Alumni Association, held in Harvard Yard’s Tercentenary Theatre between Widener Library and the Memorial Church.