Facing the future, Lewis and Faust see reason for hope 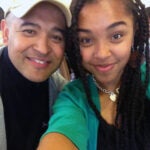 Letter from a father to his graduating daughter

Congressman, Harvard president urge Class of 2018 to rise to challenge of a world in need of leadership

Though their styles were different, Harvard President Drew Faust and Civil Rights leader and U.S. Rep. John Lewis on Thursday delivered equally powerful messages to the Class of 2018 on the importance of truth, justice, and equality at a time when those values have come under assault in some corners of the country and the world.

Speaking at Afternoon Exercises of Harvard’s 367th Commencement, Lewis repeatedly called on graduates to assume leadership roles in a world that needs them, while Faust noted that this year it wasn’t just the speakers on stage urging students to get to work. The graduates themselves see the challenges before them, she said.

“Never has the world needed these graduates more, and I think they understand that,” Faust said, sharing observations from a recent lunch with seniors.

“They described how their attitudes and plans had altered because of these changed circumstances. They no longer took their world for granted. The future of our society, our country, our planet could not be guaranteed; it was up to them.

“Their careers and life goals had shifted to embrace a much broader sense of responsibility, extending beyond themselves to encompass an obligation to a common good they had come to recognize might not survive without them.”

Faust and Lewis delivered their remarks at Tercentenary Theatre during the annual meeting of the Harvard Alumni Association.

“My philosophy is very simple. When you see something that’s not right, not fair, not just, stand up, say something, and speak out.”
— U.S. Rep. John Lewis

For Lewis, who worked alongside Martin Luther King Jr. in the 1960s and has served for 30 years as representative of Georgia’s 5th District, the speech was a continuation of a long career making “necessary trouble” and standing up for justice, even when injustice wears a uniform.

Lewis was beaten on the 1961 Freedom Rides to desegregate bus travel, and again in 1965, while marching across the Pettus Bridge in Alabama toward Montgomery. He wept after King was assassinated. But since he was working to elect Robert Kennedy as president, he thought, “At least we got Bobby.” Two months later, Kennedy was fatally shot. Lewis wept again, but the work went on.

“In the ’60s, I was arrested a few times — 40 times,” Lewis said, getting a laugh from the audience. “And since I’ve been in Congress, another five times, and I’m probably going to get arrested again. My philosophy is very simple. When you see something that’s not right, not fair, not just, stand up, say something, and speak out.”

Faust, who is stepping down on June 30 to be succeeded by Larry Bacow, was presented with a special Harvard Medal by Susan Novick, president of the alumni association.

“You have authored a remarkable chapter in Harvard’s story leading the University forward with wisdom, courage, and integrity,” Novick said.

Lewis, who received an honorary doctorate from Harvard in 2012, thanked Faust for her efforts to make Harvard a more inclusive institution. He then called on the graduates to take a stand on injustice.

Faust expressed confidence that the students are up to the task.

“It would be impossible to be surrounded by these students as they move through their time at Harvard without being filled with hope about the future they will create,” she said.

“This is what you can be,” Parker said to one of his rowers. “Do you want to be that?”

“These are the words and the message I would like to leave with Harvard,” Faust said. “The work is unfinished. The job remains still to be done in times that make it perhaps more difficult than ever. May we continue to challenge ourselves with the hope of all we can be and with the unwavering determination to be that.”