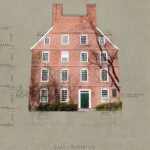 Haley Curtin nailed her degree in three years, and yearns to see its hands-on effect in a world far from Harvard

Using her head and her hands, Haley Curtin ’18 has built the foundation of a meaningful life. Meaningful first of all to her.

Curtin commutes to Harvard from her home in Waltham, Mass. The daughter of a carpenter, she has spent most of her time outside the classroom working construction to help pay for college. Inside the classroom, studying religion has provided her scholarly work with deep consequential relevance. Appropriately, she sees her studies in religion as an addition to her toolbox.

“This degree is an incredible tool and such a gift, and will hopefully allow me to effect bigger change down the line,” said Curtin, 22, who completed that degree in three years. She will work next year in a high school on the Pine Ridge Reservation in South Dakota through an AmeriCorps service program. “My impact on rural impoverished America could be bigger than just home repair projects, though I would be content to do that.”

Early in her time at Harvard, Curtin’s path was less clear as she struggled to find social and academic communities. Taking the advice of her sophomore adviser, Curtin, who grew up a Roman Catholic, took her sophomore spring and junior fall semesters off, spending the first six months on Nazareth Farm, a faith-based West Virginia service community in rural Appalachia. Twenty miles outside cellphone service, Curtin worked with people some of whose homes lacked running water or floors.

“It’s a pretty stark contrast, growing up in a Boston suburb and being at Harvard, to seeing what rural poverty looks like. It was a culture shock, but I really fell in love with it,” said Curtin, who followed her time at Nazareth Farm with interning at a homeless shelter in Clarksburg, W.Va. “I lived on a salary of $100 a week, bringing small groups of residents to help families in the southern part of the state who had lost homes in a devastating flood.”

Helping to create stable homes for those in need brought clarity to the direction of her education, and Curtin returned to Harvard, changing her concentration from environmental science and public policy to religion with a focus on Christianity and Islam.

“Being in the religion department has been a big game changer of my Harvard experience. It’s super small so I’ve had the chance to get to know and build strong relationships with many of the other students in the department. Also, it’s been great to really get to know the awesome professors and to have them as mentors and advisers,” she said.

“From an ideological perspective, studying religion also changed my relationship with my upbringing,” Curtin said. “It taught me to be appreciative, but critical, and it’s given me more ways to consider why I’m drawn to certain parts of the Catholic faith while other parts frustrate me. Now I have more ways to think about the ideas underlying the beliefs and practices.”

Courtney Bickel Lamberth, director of undergraduate studies for the Committee on the Study of Religion, said it’s been energizing to watch Curtin grow.

“She’s incredibly warmhearted and so easy to talk to about absolutely everything. Beloved by her peers, she’s incredibly wise, but not in a pedantic way. She’s had an unusually broad and deep set of experiences for a college senior,” Lamberth said. “There’s a wisdom about her that is very subtle and unassuming, but it’s inspiring.”

Curtin works for Page Associates, a building and design company in the MetroWest region outside Boston, doing home finish carpentry and remodeling three days a week. “I love being active and I really like the guys I work with,” she said. “I wanted to learn more skills so down the road I could do more home repairs. I think there’s value in being self-sufficient and having the ability to help others in this way.”

She also plays on the Harvard women’s ice hockey club team and volunteers as a tutor through Evkids, and said commuting (an hour by bike) and paying for school herself has made her more intentional about her time at Harvard.

“I have felt less pressure [to be] involved in a hundred activities. I have really had to choose what is fulfilling and what I want to be on campus for,” Curtin said. “It’s taught me to value everything — the meals I get with my friends mean so much to me. I could easily not be here so I try to make the most of it, not in the sense of building a LinkedIn page or networking, but investing deeply in the relationships I have with classmates and professors.”