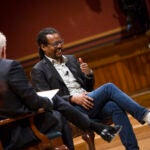 Imitation, they say, is the highest form of flattery. Had he been alive, Ludwig van Beethoven would have surely felt the love from 19th-century composer Johannes Brahms, who mimicked his German predecessor’s flair and ingenuity with the concerto.

“You can’t have a conversation about Brahms without talking about Beethoven,” said Suzannah Clark, chair of the Harvard Music Department, during a discussion at Radcliffe on Monday focused on Brahms’ monumental Piano Concerto No. 2 in B-flat. Throughout the 2018 Rita E. Hauser Forum for the Arts, Clark had an expert guide in pianist Emanuel Ax, who punctuated the discussion by playing selections by both classical giants.

A concerto typically consists of three movements for a solo instrument and an accompanying orchestra, explained Clark. In the first movement, the orchestra introduces the themes of the piece, later echoed by the soloist. Mozart was the first to disrupt the order, said Ax, But Beethoven, in his Piano Concerto No. 4, upended tradition, putting the soloist firmly at the center of the opening.

Franz Liszt, Robert Schumann, Felix Mendelssohn, Brahms, and others followed suit. “What happens after Beethoven is that because of this kind of breaking of the concerto procedure, it becomes a free-for-all,” said Ax.

Paul Buttenwieser ’60, M.D. ’64, former president of the Boston Symphony Orchestra (BSO) and a Harvard Overseer from 2001 to 2007, moderated the discussion with Clark, Marc Mandel, director of program publications for the BSO, and Ax, who admitted to feeling stressed, yet seemed just the opposite onstage.

“As nervous as I am about playing the B-flat this week in Boston, I am much more nervous now,” said the pianist.

“Certain pieces you shouldn’t neglect — this is one of them. If I don’t play it for a year, I am never going to be able to do it again.”
— Emanuel Ax, discussing Brahms B-flat

The timing of the Radcliffe talk coincided with Ax’s appearance in an all-Brahms program concluding the BSO’s regular season. The B-flat concerto, which opened the BSO program, requires regular engagement, noted the Grammy-winning pianist.

“Certain pieces you shouldn’t neglect — this is one of them,” said Ax. “If I don’t play it for a year, I am never going to be able to do it again. And of course age has something to do with it. I think I am pretty well near the end of the Brahms B-flat.”

Born in Poland, Ax moved with his family to Canada as a boy. He studied at the famed Juilliard School in New York, but the concert hall provided his greatest musical lessons, he told the Harvard crowd. From Sviatoslav Richter to Vladimir Horowitz, he “got to hear pretty much every great pianist of the generation that preceded ours … haunting Carnegie Hall was the way to learn about piano playing.”

“It’s the amalgam of influences that makes you who you are,” he added. “You take them all in somehow, and that forms you.”

Knowing that Ax would be in town made the thought of bringing him to Harvard “irresistible,” said Homi K. Bhabha, Anne F. Rothenberg Professor of the Humanities and director of the Mahindra Humanities Center, before the event. “We underestimate how important the arts and humanities are in defining what we do as citizens and who we are as citizens,” he added.

The Rita E. Hauser Forum for the Arts is an annual lecture conceived to address arts across the globe. Sponsored by the Mahindra Humanities Center, the series, inaugurated in 2012, has brought a range of artists and experts to campus to engage with the Harvard community, including actor Anna Deavere Smith, writer David Grossman, and filmmaker Mira Nair.

“The academic and intellectual breadth that the Hausers inspire is in keeping with the Mahindra Humanities Center’s mission to be a curricular crossroads that insists on the significance of interdisciplinary conversations in grasping the crucial role of intercultural and cross-cultural creativity,” said Bhabha in his opening remarks.

Mandel told the audience that Brahms, himself an extraordinary pianist, wrote the demanding B-flat concerto so that he could premiere and play it himself, which he did to rave reviews in 1881. The difficult cadenza in the first movement, a section for piano alone that tradition would have placed later in the piece, was both a testament to Brahms’ skill at the keyboard as well as a signal to the audience that “something big is in store for us.”

“It’s an outrageous cadenza. To make anybody play this at the beginning of a concerto is really cruel and unusual punishment,” said Ax.

In addition to giving the soloists the lead, Brahms borrowed again from Beethoven for the dramatic transition from second to third movement, said Ax. He also added a fourth movement, starting it in an entirely different key — a move Ax considers another Beethoven “steal.” Brahms also ensured the entire work was impossibly hard to play.

“Everything’s hard,” said Ax. “I don’t know why he wrote it that way.”

It was so hard, in fact, that even Brahms didn’t always get it right, noted Clark. Yet the mistakes barely seemed to register with the composer or his audience. One critic, who heard Brahms play the piece in Hamburg, wrote that “the wrong notes did not really matter. They did not disturb his hearers any more than himself. He took it for granted that the public knew he had written the right notes and did not worry himself over little trifles as hitting the wrong ones.”

Music to the ears of Ax, who called the judgment “one of the most comforting reviews.”