Orators speak to inspire at Commencement 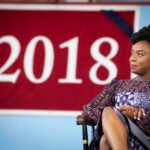 Adichie: ‘Protect and value the truth’

Three students chosen for one of University’s highest honors

Considered among the highest honors a student can achieve, student orators face a selection process that begins in early March, with final auditions in late April. The three will speak from memory before an audience of 32,000 graduating students, their family members, and friends.

This year’s winners shared their thoughts on their impending graduation and on the inspiration for their speeches.

Phoebe Lakin, from Ithaca, N.Y., is a classics concentrator who has studied Latin since the fourth grade. Lakin, who has also studied French and German, plans to pursue an M.Phil. in classical studies at Cambridge University next year, with an eye toward a Ph.D. and a future teaching career.

Lakin said the study of language and literature gives her the ability to be part of a long-lasting community centered on works of literature.

The study of literature also gives her an avenue to explore her other love, that of the outdoors, as she did in her senior thesis on a first-century Roman poem about gardens. Lakin is planning to spend the summer in Switzerland working on an organic farm before diving back into her studies.

“I’m very interested in the human experience in the natural world and how that makes its way into literature,” Lakin said.

Her speech, to be delivered in Latin with an English translation available in the day’s program, will deal with themes of change — how Harvard has changed students graduating this year, but also how the students have changed Harvard.

Christopher Egi, from Toronto, is an economics concentrator and captain of this year’s Harvard men’s basketball team. Egi, who is planning to start work at Goldman Sachs after graduation, said he’s always been interested in business, and got an early start in second grade, when he sold glue sticks — some of which were empty — to classmates.

Both his father, who is in real estate, and his mother, who owns a home for Alzheimer’s disease sufferers, are business people, Egi said, and he and his sister have already started one business, an online program for writers called “Impact Writers Hub.”

Egi said he feels like a different person from the somewhat naive freshman who arrived on campus four years ago, in part because of all he’s learned from his classmates in informal discussions over the years. He has been active tutoring others, has been involved in the campus black community, and has raised money to support legislative and policy solutions to police brutality.

Egi, the son of Nigerian immigrants to Canada, said his address will deal with issues of dreams fulfilled and unfulfilled, including those of his Nigerian grandfather, who died before Egi could meet him, but for whom the importance of education was a value passed on to his daughter, Egi’s mother, and so has influenced even a grandson he never met.

“That was a very big thing growing up, siblings competing to see [who] can do best academically,” Egi said. “It was important. Probably one of the biggest priorities my parents had [for us]  growing up was working hard and trying your best.”

Pete Davis, from Falls Church, Va., is attending his second Harvard Commencement. He graduated from the College in 2012, and, as an undergraduate was one of the founders of “Harvard Thinks Big,” which brought 10 faculty members to Sanders Theatre to talk about big ideas for 10 minutes each.

Davis has an entrepreneurial spirit, judging from his founding roles in several other enterprises such as a website to encourage community engagement and a “tiny house” startup called Getaway that brought him to television’s “Shark Tank.” (Getaway now has 30 employees.) His current ambition is to transform the Democratic Party so that it is less strictly focused on national electoral politics and more focused on building a community to which people want to belong even between election cycles.

“How [can we] get people excited and empower people?” Davis said. “How can we make being part of a political party not just getting hit up for money and votes every four years, but when you’re sick, fellow Democrats bring you soup? You go to meetings that speak to your spiritual and communal side and not just the angry and political side?”

Davis said his speech will deal with something he learned from his parents: that everyday heroism has more to do with getting up in the morning and showing up each day than it does with jumping feet first into the midst of a crisis and slaying a dragon.

“For most of us, the crisis is a long-term crisis. Slaying the dragon is not one moment but waking up every day for 40 years dedicated to continuing the slow walk,” Davis said, adding that his mother found it perplexing when people asked her if she was happy, and she would respond, “I don’t think much about happiness. I think, ‘Am I fulfilling my commitments? Am I feeling strong in my relationships? Am I close to God and holiness?’

“What that is,” Davis said, “is trading happiness for true joy. … My heroes see the joy of a long day’s work.”