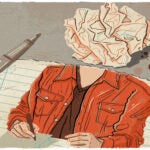 A boozy writer who crossed out the adjective

Prominent Mexican archaeologist Eduardo Matos Moctezuma on April 10 will deliver the first lecture on campus in the series that bears his name and honors his contributions to archaeology. The title is “Eduardo Matos Moctezuma Discovers Himself: Excavations of the Great Aztec Temple,” and the public talk will take place at 6 p.m. at the Geological Lecture Hall, 24 Oxford St.

Matos Moctezuma directed the excavation of the main Aztec site known as Templo Mayor in the late ’70s. His work unveiled major aspects of Aztec religion, life, and society to the world.

Below is an interview with Matos Moctezuma, first published in the Gazette last year, in which he talked about the Aztecs and his breakthrough work. The interview is translated from the original Spanish.

GAZETTe:  All ancient cultures have creation myths. What was the Aztecs’?

MATOS MOCTEZUMA: They believed they came from a place called Aztlan, hence the name Aztecs. Some experts think Aztlan is a myth because it has yet to be discovered. According to the myth, they left Aztlan guided by one of their gods until they arrived in the Texcoco Lake, in what’s now Mexico City, where they founded Tenochtitlan, the capital of the Aztec empire, in the year 1325.

GAZETTe: But how did the Aztec empire really originate?

MATOS MOCTEZUMA: Mexico is a country with an ancient history that goes back 20,000 years. Before the Aztecs, there were the cultures of Teotihuacan, Monte Alban, Palenque, and Tajin. But the Aztecs, also called Mexicas, emerged in the 14th century when they freed themselves from their former masters, the Azcapotzalcos, after forming an alliance with the Texcocos and Tacubas. They began a large expansion across what is now Mexico and Mesoamerica through wars. It is said that when the Spaniards arrived in the early 16th century, the Aztecs ruled over 370 small city-states that paid tribute in goods to Tenochtitlan, the capital of the Aztec empire.

GAZETTe: The Aztec culture has been described as fierce and bloodthirsty. What were the Aztecs really like?

MATOS MOCTEZUMA: The Aztec was fundamentally a culture based on war and agriculture. Their two most important deities were Huitzilopochtli, the god of war, and Tlaloc, the god of rain. The duality of war and agriculture was crucial for the Aztec economy. The Aztecs expanded their empire through military conquest and sustained it through tributes imposed on the conquered regions. Every 80 days, the new subjects of the Aztecs had to pay tributes to Tenochtitlan. As for the Aztec society, it was very complex. It was socially divided between the nobility and the populace. The nobles included the ruler, the priests, and the military, all of whom had privileges and didn’t pay taxes. The poorer people had to work as painters, poets, sculptors, peasants, doctors, or architects. They attended schools to learn their trades and received military training to be prepared for wars. They also attended schools to learn about religion, music, and their language, the Nahuatl, which we know because they left codices with pictograms and texts that told their history. When the Spaniards came, Tenochtitlan had approximately 200,000 people. It was one of the world’s largest cities in the 16th century. The Aztecs were one of the world’s greatest civilizations.

GAZETTe: How do you compare the Aztecs to other great ancient civilizations, such as the Mayas, the Incas, the Chinese, or the Egyptians?

MATOS MOCTEZUMA:According to experts, there are six large regions in the world that are the cradles of civilization. Those regions are Egypt, Mesopotamia, China, the Indus Valley, Mesoamerica, and the Andes, where people developed civilizations independently, boasting large cities and strong states. In Mesoamerica, it was the Aztecs and the Mayas but also the Zapotecas, Mixtecas, Toltecas, etc., and in the Andes, the Incas, but also the Moche, Chimu, Chavin, and others. The Aztec was a strong state due to its military power, its religion, and its tribute system. They developed their own calendar of 18 months of 20 days each, built large cities and huge pyramids and temples, and developed a farming system called chinampas that they used to grow crops on shallow lake beds. They grew maize, beans, tomatoes, pumpkins, chilis, etc. The Aztecs’ contributions to the modern world are extensive, from agricultural products to farming techniques to stunning art and architecture.

MATOS MOCTEZUMA: The Aztec religion was primarily polytheist. They had different gods, male and female. The sun god was Tonatiuh. There were many deities, and they were revered in monthly festivities with rich offerings. There is this black legend that only the Aztecs used human sacrifices in their religious rituals, when there is evidence that they existed in many other ancient cultures that were mostly agricultural societies. In the Aztecs’ case, human sacrifices were meant to please the sun god so that he could continue providing them with light, warmth, and life. They believed that without human sacrifices, the sun could stop and everything was going to die. So the sun had to be fed so that it could continue with its movement, so that there would be day and night. But not all rituals demanded human sacrifices. In general, those who were sacrificed were slaves or prisoners of war.

GAZETTe: What factors contributed to the fall of the Aztec empire?

MATOS MOCTEZUMA: Before the arrival of the Spaniards, there were nine emperors, and during the war of conquest, two more. During the last 18 years of the Aztec empire, the ruler was Moctezuma II. In those years, the empire continued its expansion through war, but exacting tribute from their subjects created discontent among them. There were small rebellions, but the Aztecs, who had the military power, always won. When the Spaniards landed in 1519 in what is today Veracruz, the local people there, the Totonacas, complained to conquistador Hernan Cortes that they were subjugated by Moctezuma, the señor of Tenochtitlan. When Cortes heard this, he promised that they would be freed from paying tribute if they become their allies to overthrow Moctezuma. With their help, Cortes gained more allies among other disgruntled groups in the region, and he planned the advance towards Tenochtitlan. There is a myth about the question of how 800 Spaniards defeated a whole empire. Well, it wasn’t only 800 Spaniards. They were supported by thousands of indigenous people who wanted to get rid of Aztec rule. When the conquest happened, when Tenochtitlan was about to fall, surrounded by land and sea, those groups of local enemies of the Aztecs played a fundamental role in the fall of the Aztec empire. Also, the Aztecs used a tactic that worked against them. Unlike the Spaniards who came to kill, the Aztecs preferred to take prisoners of war for human sacrifices. The Aztecs captured Cortes, and they didn’t kill him because they were going to sacrifice him. But his comrades saved him. Moctezuma was taken prisoner and was killed by the Spaniards.

GAZETTE: Are you a descendant of Moctezuma, the Aztec emperor?

MATOS MOCTEZUMA: There are not too many who have that last name in Mexico. According to my mom, we are descendants of Moctezuma. But I am not sure, and I don’t care too much about it.

MATOS MOCTEZUMA: The Templo Mayor was the center of the ancient Aztec empire, the most sacred place for the Aztecs. In 2014, we celebrated the 100th anniversary of the discovery of the Templo Mayor. In 1914, Manuel Gamio found remains that led him to believe that the site was the Templo Mayor, which until then we had only heard about. But the site was in the middle of the city; it was actually underneath Mexico City. Years went by, and in 1978 electrical workers who were excavating underground found a big sculpture, which turned out to be a monolith depicting an Aztec goddess, which led to the discovery of the Templo Mayor. The same year, the Templo Mayor Project was founded, with me as the director, and under my helm and with a multidisciplinary team, we started excavations and were able to find a large part of the remains of the religious heart of the Aztecs. Excavations are still taking place, and, as in the past, we’re excavating the ritual heart of the Aztec empire, which we had only heard of before. After we dug up the remains of the temple, we were able to learn the role of the Templo Mayor in Aztecs’ life and the powerful symbolism it held in the empire.

GAZETTe: What is left to learn about the Aztecs?

MATOS MOCTEZUMA: We’ve just scratched the surface of Tenochtitlan, the capital, but we still need to know how it was organized, the social hierarchies, and the way it functioned. Since it’s underneath the city, there is a lot still to be learned.