A boozy writer who crossed out the adjective 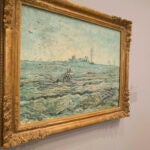 A different side of van Gogh

Leslie Jamison ’04: ‘There was an earlier version of myself that believed all great storytelling had to come from radical dysfunction’

Novelist and essayist Leslie Jamison ’04 comes to Cambridge Thursday for a conversation with Harvard professor James Wood on her new book, “The Recovering.”

Author of the best-selling “The Empathy Exams,” Jamison mixes memoir with literary criticism in her new narrative, reflecting on her own struggles to get sober and the burden of alcohol in the work and lives of writers and performers such as Raymond Carver, Billie Holiday, Stephen King, and Amy Winehouse.

Jamison, based in New York and on the road with her 12-week-old daughter and her mom, will sit down with Wood at the Cambridge Public Library. Ahead of the visit, we talked to her about her early days of drinking, the shame and loneliness of addiction, and becoming a sober storyteller.

GAZETTE: Let’s start at the beginning. How did you come to choose the title and subtitle (“The Recovering: Intoxication and Its Aftermath”)?

JAMISON: A big part of the word recovering had to do with ongoingness. It’s never fully finished and I wanted to ponder that. It’s a process larger than any single person. It’s not “my” recovering. It’s like an umbrella holding different stories. There are many recovering stories that have been lost to the margins. I wanted to highlight not only famous drunk writers — John Berryman, Raymond Carver — but stories and writers who had been fully forgotten — like George Cain, who wrote about heroin’s grip on him in “Blueschild Baby.”

As far as the subtitle goes, if authors had their way, there’d be no subtitles. The big struggle was trying to think of a genre label. “Intoxication” summons this feeling of being overwhelmed, enraptured under the thrall of something, and I wanted to conjure that and the aftermath as just as important a part of the story. The story of getting better is just as interesting as falling apart.

GAZETTE: Your personal story includes a lot of disturbing, sometimes violent episodes, from finding a maggot growing in your ankle in Bolivia and being sexually assaulted in Nicaragua to many blackouts. Why was it important to write about these difficult moments?

JAMISON: I didn’t want to gloss over the truly hard experiences or shameful feelings, and, to be honest, about how good drinking has felt and why I fell in love with it. In recovery there’s a saying: “You have to play the tape all the way through,” if you are fantasizing about having a drink. In the narrative, I was playing the tape all the way through. There were some external consequences in my relationships, and certain health risks or violence. The external consequences in my life were nowhere near as profound as other people who deal with addiction. I had to acknowledge it by analyzing it. People aren’t being judged for how much they have lost. In meetings, people are really ready to look for resonances, not differences.

GAZETTE: Can you be a great sober storyteller?

JAMISON: There was an earlier version of myself that believed all great storytelling had to come from radical dysfunction. Now, having written the book, I believe great storytelling can come from great places. Some writers never come out of it and have created great art from dysfunction. Jean Rhys, for example, drank into impossible old age. She never found her way out of abiding sadness, but she also created phenomenal works of beauty. It wasn’t so much that I wanted to disprove the connection. Pain is an incredible catalyst, but I wanted to explore this other zone of possibility — stages of wellness that could create really compelling narrative.

"Some writers ... have created great art from dysfunction. ... It wasn’t so much that I wanted to disprove the connection. Pain is an incredible catalyst, but I wanted to explore this other zone of possibility — stages of wellness that could create really compelling narrative."

GAZETTE: You are embarking on a 17-city tour. How much are you expecting your readings to have elements of an AA meeting, with audience members sharing their own emotional experiences?

JAMISON: I’m sure there will be some level of people sharing their stories. It’s already happened with people reaching out on social media and writing me notes. I love and embrace that. I know, as a reader, how much I respond to other people’s stories. I also have tried to draw better boundaries. Having my infant daughter with me will be a different kind of boundary. I’m utterly devoted to her, and I probably can’t give as much of myself. One of my big-picture hopes for the book is that it gives people a different way to relate to their own lives.

GAZETTE: You write about your early years at Harvard, struggling with alcohol and food and feeling alone. How do you reflect now on that time?

JAMISON: I was recently giving a talk at a college and was asked to say words about my own time. I ended up reflecting on this visual memory of looking up at lit windows of the dorms on my way to use the pay phone to call my mom, or to walk to Hemenway to work out. I felt like that person in that lit space was probably pretty happy and having the experience I was not having. When I look back, I think I was projecting a lot of happiness and stability on people around me because that’s what I wished for myself. So many people behind those windows were experiencing what I was experiencing. It was fallacy, and those windows held their share of hardship as well.

GAZETTE: Has having had a baby changed your writing habits?

JAMISON: I have a shared writing space. That’s an important part of the day for me. It’s like going to work, and my body has a Pavlovian response. On the block of 14th Street, I see Potbelly Sandwich Shop, and I know I have to get into gear: I have a writing practice. I try not to go on the internet until 12 or 1 p.m. I also have a 9-year-old stepdaughter, and the last four or five years of my life have taught me to get much less precious about the conditions I need in which to write. I write in airports, on airplanes, in hotels, even on the subway. Rather than feeling like I need the stars to align, I try to write anywhere I can any time I can.