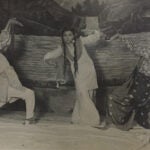 Rachael Denhollander recalls that she spent more than half of her life reckoning with guilt, shame, blame, and anger before coming forward as the first to accuse former USA gymnastics doctor Larry Nassar of sexual assault.

But in a powerful talk at Sanders Theatre Thursday hosted by the Veritas Forum, the former gymnast, who said she was 15 when he began molesting her, explained that her evangelical Christian faith gave her a way forward and a way to reconcile the devastating experience.

“Justice is the foundation for forgiveness. If justice did not exist, forgiveness, true forgiveness, could not exist either,” she said in a speech followed by a conversation with Nancy Hill, Charles Bigelow Professor of Education at the Harvard Graduate School of Education. “Only because I can trust God to bring that justice on my behalf and bring it perfectly, I can release my desire to retaliate.”

More than 150 women eventually followed Denhollander’s brave lead, and Nassar, who was convicted of seven counts of first-degree criminal sexual contact, was sentenced last fall to up to 175 years in prison.

In court, Denhollander was the final accuser to give an impact statement, telling Nasser: “Should you ever reach the point of truly facing what you have done, the guilt will be crushing. And that is what makes the Gospel of Christ so sweet. Because it extends grace and hope and mercy where none should be found. And it will be there for you.”

Her thoughts in Sanders ranged from a Merriam-Webster Dictionary breakdown of the definitions of justice and forgiveness to being encouraged by the #MeToo movement (“It’s not — yet — to the level we need it to be at”) to a questioning of the six-month sentence that California college student Brock Turner received after being convicted of sexual assault in 2016.

“Did you realize that minimizing the evil that happened to that victim was the most unloving thing that judge could have possibly done?” she said. “We intrinsically know that a judge who does not see evil as true evil does not care about the damage.”

When an audience member asked about moments she had doubted her faith, Denhollander, who now has three children and is pregnant with her fourth, said there were “significant times of wrestling.”

“Ultimately, what happened strengthened my world view,” she said. “Ultimately, where that led me back to was the foot of the cross.”

But Denhollander’s devout faith still struggles with the church community’s response to victims’ suffering. Earlier this year, she told Christianity Today magazine that “an abhorrent lack of knowledge for the damage and devastation that sexual assault brings” makes church “one of the worst places to go for help.”

“That’s a hard thing to say, because I am a very conservative evangelical, but that is the truth. There are very, very few who have ever found true help in the church,” she said.

The final question was, perhaps, the evening’s most dramatic. A doubtful audience member asked: “How can people trust the church and Christianity?”

“Don’t,” Denhollander said to an audible audience gasp. “The church is made up of fallen people. I trust my savior.”