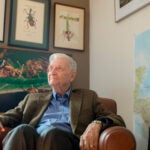 Jonathan Guyer, RI ’18, an independent journalist and contributing editor of the policy journal Cairo Review of Global Affairs, has spent the past five years researching Arabic comics. To that end, he has interviewed many graphic artists and translated hundreds of their cartoons. He is now writing a book about what he’s calling the “new wave” of comic art that has swept the Middle East and North Africa in the past 10 years.

RADCLIFFE: Who are your heroes?

GUYER: I admire the tenacity of many journalists I have met across the Middle East, far too many to name. One example that comes to mind is the team at Egypt’s last remaining independent news outlet, Mada Masr, which authorities currently block access to within the country. They work against all odds, investigating ministries and institutions that seek to be opaque. In the face of existential threats — Egypt is the third-worst jailer of journalists in the world, after Turkey and China — Mada continues to publish daily.

GUYER: I’d like to think it’s my enthusiasm or ruthlessness, but it’s probably my passion for the sartorial delights. Growing up, my dad used to take me on runs to his favorite haberdasheries and tailors on weekends rather than Sunday football games. Is being fashionable a personality trait?

RADCLIFFE: Who is your muse?

GUYER: Cairo. The city of 20 million has been my source of inspiration for a decade. Of course, there is a gendered dynamic to the notion of the muse, and I don’t totally feel comfortable with gendering such a diverse metropolis. Indeed, local artists have personified Egypt as a woman for a century or more. In the process, ideas of womanly honor and idealized feminism are activated, which demand further inquiry and serious criticism (Beth Baron, in her book “Egypt as a Woman: Nationalism, Gender, and Politics” [University of California Press, 2007], began this important conversation). Nevertheless, Cairo has been the engine of my ideas. I owe the city everything.

RADCLIFFE: Tell us your favorite memory.

GUYER: When I worked as a Mideast researcher in D.C., I staffed a swanky invite-only event at the illustrious Café Milano. By 10 p.m., my bosses had already left. I found myself at a long table drinking champagne with Quincy Jones. He recounted Aretha Franklin’s birthday party on a yacht in Detroit. How I wish I had asked him about producing “Thriller.”

RADCLIFFE: Describe yourself in six words or fewer.

RADCLIFFE: What is your most treasured possession?

GUYER: The first issue of the Paris Review, from 1953. I found it at the infamous John King Books in Detroit.

RADCLIFFE: What inspires you?

GUYER: Those who can maintain a sense of humor in the face of adversity and conflict.

RADCLIFFE: Were your life to become a motion picture, who would portray you?

GUYER: The dream: Paul Rudd. The reality: Jason Schwartzman. And if the director knew me well: Larry David.

RADCLIFFE: Where in the world would you like to spend a month?

GUYER: Argentina. I have been taking tango lessons on and off for three years, but I’m still a novice. I need to practice.

RADCLIFFE: What is your greatest triumph so far?

GUYER: The fact that I’ve managed to get my facility in Arabic up to a level where I can be as spontaneous as I am in English, or at least fake it. Over the past year, I have interviewed poets and novelists in Arabic and even appeared on live radio on BBC Arabic. The sophomore version of me, conjugating verbs and studying word lists, could never have imagined it.

RADCLIFFE: Whose tunes do you enjoy?

GUYER: Lately, I’ve been trapped in the ’60s, listening to Joni Mitchell, the Beach Boys, the Band, and Dylan. But I’m a Detroiter, so Motown is in my blood and the White Stripes are my anthem. For deep cuts, I am always hooked on classic blues, like the work of Blind Willie McTell and Memphis Minnie, as well as big-band jazz.

RADCLIFFE: What is your fantasy career?

GUYER: Honestly — and I’m pinching myself here — it’s what I’m doing right now. How many people get to write about comics for a living?

RADCLIFFE: What is the most challenging aspect of being a Radcliffe fellow?

GUYER: Sharing the glories of the ivory tower with those outside the Harvard orbit. I am eager to help scholars abroad at risk, for instance, and there is a particular urgency in countries like Turkey. When I attended an academic conference in Istanbul a month before the failed coup attempt of 2016, the situation was already tenuous, and since then, it has exacerbated considerably. The challenge is how to go beyond our research projects and contribute to something that isn’t just another book or paper.

RADCLIFFE: What drew you to Arab comics and graphic novels?

GUYER: I have always been an amateur illustrator. In college, I served as cartoonist for the Brown Daily Herald and the American University in Cairo’s student newspaper, Caravan. I kept drawing for blogs while working as an editor and researcher in Washington, D.C. So when the Arab revolutions broke out in 2011, I wondered what Arab cartoonists were thinking and doing. I made a research plan and applied for a Fulbright. Little did I know that graphic novels, a relatively new medium, were budding in Cairo and Beirut and, more recently, across North Africa.

RADCLIFFE: What do these visual forms reveal about the Arab political climate?

GUYER: Even if many of the comics in question are not overtly political, the emergence of alternative comics and graphic novels in the Arab world in the past decade reflects many of the political ideas of the 2011 revolutions. In the many horizontal comic collectives that put out illustrated ’zines, one can see radical politics, experimental narrative techniques, and new aesthetic approaches in the drawings and compositions. There is also a particular interest in urban environments, which again reflect the ethos of the so-called Arab Spring protests and their anchoring within the city fabrics of Cairo and beyond.

RADCLIFFE: What’s the importance of this art form to those producing and consuming it?

GUYER: Comic strips and political cartoons have been around for over a century in Arabic, but the newness of Arab graphic novels and alt-comics is incredibly liberating for artists. While they draw upon the local visual and literary traditions, they also have the space to experiment freely. Comic artists in the Middle East are pushing the envelope and the boundaries of the art form, and readers eagerly consume these countercultural products. Sure, censorship regimes endure in many Arab states through laborious legal frameworks, and the threats are real. Yet the scores of artists I have interviewed are scarcely deterred by intimidation from governments or extremists. In the meantime, their illustrated works are inspiring youngsters to pick up pens and try their hands at telling their own singular stories.