The topic is race, onstage and afterward 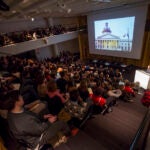 A turning point in memory

Poet Claudia Rankine’s newest play places a conversation about race at center stage as the curtain rises, and encourages viewers to continue the discussion on their own after it falls.

The world premiere of Rankine’s “The White Card,” a collaboration with ArtsEmerson and the American Repertory Theater (A.R.T.) on view at the Emerson Paramount Center in downtown Boston through April 1, explores identity, belonging, and the racism contained in comments and cursory glances that can go unnoticed by those who don’t suffer under its weight. Rankine’s first act captures the action at a dinner party; her second is devoted to an open dialogue with the audience.

Building on the themes in her award-winning 2014 book, “Citizen: An American Lyric,” a blend of poetry, essay, and imagery that stares at race in America, “The White Card” unfolds in a posh New York City loft. There, a well-off white couple, their activist son, and a white art dealer engage with an African-American artist about her work and about race more broadly. The result is an uncomfortable, charged encounter, one that Rankine knows well.

On a bitter winter morning recently, the MacArthur Fellow and poetry professor at Yale University discussed how “White Card” grew out of “Citizen,” the book that sort of “said ‘no,’ you have to stay with me.” The idea for the play crystalized during the book tour. As the weeks passed, Rankine said she became less interested in reading from the work, and more interested in hearing what people had to say about it and their experiences.

“In those conversations, I began to realize that we as a country have no practice talking about race publicly. And people and the discussion itself get stalled very quickly. We don’t know how to hold discomfort. We are easily defended in our positions. We become not only defensive but feel attacked and fragile in terms of the truth of our experiences,” she said.

“So I wondered what it would be like to have one of these discussions play itself out … how could we stage a discussion where we would all have to move through the moments of discomfort into the next turn?”

“I began to realize that we as a country have no practice talking about race publicly. And people and the discussion itself get stalled very quickly. We don’t know how to hold discomfort. We are easily defended in our positions. We become not only defensive but feel attacked and fragile in terms of the truth of our experiences.”
—Poet and playwright Claudia Rankine

In addition to the many conversations she had while on tour, a discussion in Cambridge also informed Rankine’s script. Last spring, Homi Bhabha, director of the Mahindra Humanities, Center, organized a reading of a section of the work followed by a discussion with a range of Harvard scholars that Rankine called “enormously helpful.”

Helpful too was A.R.T. Artistic Director Diane Paulus, likely “the biggest gift that I was given outside the original collaboration with ArtsEmerson,” said Rankine.

ArtsEmerson Artistic Director David Dower initially asked Rankine to adapt “Citizen” for the stage. Eager to create “an extension” of the work, she joined with dramaturg P. Carl, then co-artistic director and now a distinguished artist in residence at ArtsEmerson, to craft the new play. Carl helped enlist the A.R.T. and Paulus to hone the piece further.

Paulus, who dove deeply into the work and signed on to direct, “was constantly pushing forward,” said Rankine. “This is one of the things that’s really nice about the theater versus working on books on your own … everyone is bringing the full force of their experiences in the real world and the vastness of their intellectual prowess to the activity of getting this thing to come alive.”

Rankine and Paulus want to drive that creative energy on after the final curtain. When the one-act play ends, audiences will be encouraged to remain for 20-minute facilitated conversations. The production “endeavors to move forward the conversation begun in ‘Citizen: An American Lyric’ and other works,” notes Paulus in the play’s program guide. “‘The White Card’ … asks the important question ‘Can American society progress … if whiteness remains invisible?’”

“As with the discussions after ‘Citizen,’ I am really interested to see where we go in these discussions,” said Rankine, “because on a certain level we are unknowable to each other as people of different races because we have been living different experiences.”