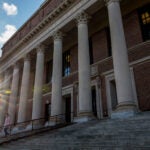 When Brandon Stephens and Jennifer Lowell ’19 traveled north to visit Presque Isle, Maine, they were struck by the cold and isolation that envelop the small Native American community there.

With 1,250 members, nearly 80 percent of the Aroostook Band of Micmacs live in poverty, and 90 percent are unemployed. Yet they have hope. On a winter morning, a dozen tribal officials met with Stephens and Lowell at the community center to talk about their wishes for a better future.

Stephens and Lowell are among 24 students taking “Native Americans in the 21st Century: Nation Building II,” a class that pairs students with indigenous and tribal organizations to work on projects requested by the communities.

In the past, tribes have sought assistance drafting businesses plans and models of sustainable economic development, creating initiatives to preserve their languages, or designing educational curricula and health and social welfare programs. The Micmacs wanted help with two projects they see as key to their well-being: a blueprint to improve their operations management, and a plan to start a solar farm.

For Stephens and Lowell, the meeting with the tribal leaders was more than homework.

“It’s a huge change of pace from the typical College class,” said Lowell, a premed student with a double concentration in classics and philosophy. “I love all my courses, but I feel honored to be doing a project out in the world that could change people’s lives.”

Over the past eight years, students have worked on more than 90 projects addressing topics from economic development to health and social welfare to land and water rights. Some projects have been brought to life by the communities themselves, such as a daycare center managed by the Shinnecock Indian Nation on Long Island, a school health program that benefits young Fort Peck Assiniboine and Sioux in Poplar, Mont., and a school program for gifted indigenous youth in Ontario, Canada.

The students take the class during the January term. First they become familiar with the inequities in economic development, education, health outcomes, and other factors that make Native Americans likelier to experience poverty and unemployment than other Americans. In the spring, the students get hands-on experience by visiting communities that have asked the Harvard University Native American Program for help with their projects.

For Stephens, who is pursuing a mid-career master’s degree in public administration at the Kennedy School of Government and is an enrolled member of the Eastern Band of Cherokee Indians in North Carolina, the course is a chance to improve the lot of communities that have long been exploited and forgotten.

“In the past, people would tell Indian tribes how to govern themselves in exchange for funding aid,” said Stephens, who works as development director for the United South and Eastern Tribes, which includes 27 federally recognized tribes.

“Instead, with this course, we want to help tribal nations build their capabilities to govern themselves,” he said.

The course is offered through the Harvard Graduate School of Education and the Faculty of Arts and Sciences and is taught by Dennis Norman, chair of the Native American Program. Each year, tribal and indigenous organizations submit their project proposals to the program. Students conduct research, identify resources to help execute the projects, and prepare professional final reports. Throughout, they respect the tribes’ rights to self-governance and sovereignty.

“It makes a huge difference for the communities, because the history of universities working with native communities is one of exploitation,” said Norman said. “It used to be people doing their dissertations or writing papers for their careers, but not giving anything back to the community.”

This semester, some projects are taking students to Phoenix to work with the White Mountain Apache Tribe developing business plans for a museum store, and to Santa Clara Pueblo, N.M., to design policies and infrastructure to create higher learning opportunities for young tribe members. Students also travel abroad to work with indigenous communities.

The Native American Program funds the students’ travels through its budget and donations. A $2,000 gift from the Shakopee Mdewakanton Sioux Community, southwest of Minneapolis, helped pay for Stephens and Lowell’s trip to Maine, and other students’ trips.

Stephens and Lowell both said they were impressed by the resourcefulness and candor of the tribal leaders who told them of their challenges, frustrations, and hopes. The two projects, Micmac officials wrote in their proposal, represent an opportunity for their community to overcome the “historic poverty it has endured for many generations.”

While Stephens and Lowell know that turning people’s lives around is a formidable task, they’re confident they can make a lasting contribution.

“We’re not going to change generation upon generation of historic trauma and disparities with a semester-long project,” said Stephens, “but we’re hopeful we can give them a roadmap to start dealing with some of the problems they face.”

“We want to build on what they have already done with their ingenuity,” said Lowell.