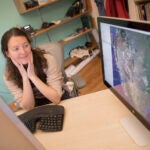 Illnesses caused by air pollution are the third-leading cause of death in developing nations, and more than 5 million people worldwide die every year from air pollution exposure. Catalytic converters, the most widely used air-purification devices, convert the toxic gases and pollutants produced by fuel combustion into benign chemicals before the exhaust is released into the atmosphere. However, catalytic converters are very expensive because the catalysts required for the cleaning reactions are precious metals, which account for 70 to 90 percent of the cost of manufacturing the converters. Additionally, they are inefficient, because the precious metal particles are embedded randomly in the catalytic coating and, therefore, some never come into contact with the pollutants they’re meant to clean.

Researchers at the Wyss Institute and Harvard John A. Paulson School of Engineering and Applied Sciences (SEAS) are developing a new type of catalytic coating that is inspired by the honeycomb-like nanostructure of a butterfly’s wing. This underlying structure creates channels through which air can flow unimpeded, and the precise placement of catalysts on the structure maximizes the efficiency of the catalysis reactions while decreasing the amount of precious metals needed by approximately 80 percent. These coatings can be easily integrated into the existing $20 billion catalytic converter industry, and their lower cost could extend the market for catalytic converters to home use in lower-income countries.

This work was supported by the National Science Foundation Designing Materials to Revolutionize and Engineer our Future program, the Integrated Mesoscale Architectures for Sustainable Catalysis, and an Energy Frontier Research Center funded by the U.S. Department of Energy, Office of Science, Basic Energy Sciences.

To read the full story, visit the Wyss Institute website.