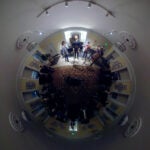 Broadway theatergoers know that tickets to the musical “Hamilton” can cost more than a month’s rent, except for winners of the show’s $10 online lottery. But the hit’s creator, Lin-Manuel Miranda, played to a different kind of packed house on Thursday night at Harvard Kennedy School (HKS), speaking about Latino identity and activism.

Miranda, who is also the force behind “In the Heights,” kicked off the second “America Adelante” conference, hosted by the Center for Public Leadership. The conference drew together Latino students from across the University, as well as more than 40 Latino leaders in business, arts, and government. Through a series of panel discussions and networking events, the conference tried to foster connection and collaboration between the students and guests.

“I feel really underqualified to be here,” Miranda joked as he took the stage with Amanda Matos, M.P.P. ’19, an HKS student and co-founder of the WomanHOOD Project, a Bronx-based mentorship program for girls of color.

Since both Matos and Miranda are proud Nuyoricans — New Yorkers of Puerto Rican descent — Matos fired off a few home-based warm-up questions: Yankees or Mets? The A train or the 1? Once they’d covered the basics (Yankees and the A train), Miranda settled in for a more serious discussion on code-switching, activism, and staying true to one’s roots.

“I’m in a roomful of would-be Nina Rosarios right now,” Miranda said, referring to a character from “In the Heights” who leaves her neighborhood to attend Stanford University, becoming the first person from her block to attend college. Miranda shared some of his experiences of attending Hunter College and Wesleyan University, and gradually coming to see his dual cultural identity as “a superpower.”

Miranda began work on “In the Heights” as an undergraduate at Wesleyan, mixing the salsa and merengue beats of his heritage with the musical theater and freestyling hip-hop he also loves. The result, he said, was a realization that “you have to bring all of yourself into a room, not just the parts that fit in.” He cited the problematic stereotypes of knife-wielding Puerto Ricans from “West Side Story” and Paul Simon’s 1998 musical “The Capeman” as a wake-up call, adding, “I realized: No one’s making your dream musical. You have to make your dream musical.”

Matos asked Miranda how Latinos can create solidarity and stay connected to their heritage while building bridges with non-Latino allies and supporters. “Give us some best practices,” she urged.

Miranda’s response was simple. “I think continuing to support ourselves and our humanness is so important,” he said. “That’s what ‘Hamilton’ does: It represents the other strand of the American story that we export. It celebrates the one founder who wasn’t from here — who grew up in the Caribbean. We’re a nation of immigrants, and we ought to be proud of that story.”

“Latinos in the U.S. — both immigrant and native-born — are a group that has been growing in size and influence and will continue to grow,” said Erika Carlsen, the assistant director of fellowship programs and Latino initiatives at the Center for Public Leadership, who organized “America Adelante.” “How do future public leaders understand this community, and the challenges and incredible potential benefits related to it?” She cited the great economic power of Latinos, and the need to build networks among young and seasoned Latino leaders to address key policy issues.

Matos agreed. “As Latinx students and students who care deeply about communities of color, it’s important that we have an infrastructure to build power, solidarity, and strategy on the most pressing issues impacting our communities,” she said. “I hope students will see that they are all leaders now, and that we already have the power and skills to continue creating good in the world.”

Carlsen and Miranda paid tribute to Lisa Garcia Quiroz ’83, M.B.A. ’90, a longtime executive at Time Warner who was also a champion of diversity both at her alma mater and in her workplace. Garcia Quiroz, who was instrumental in organizing the first “America Adelante” conference in 2016, worked tirelessly to mentor and encourage young Latino leaders until her death in March from pancreatic cancer. HKS has established a graduate fellowship in her honor.

“There’s no shortage of ways to do good,” Miranda told his audience, citing the examples of Garcia Quiroz and activists such as the high school students from Parkland, Fla., who have spearheaded the #NeverAgain movement. “I can get as overwhelmed as the next person,” he admitted. “What I try to tell myself is: Don’t think of it as this tidal wave. Think of it as: There’s no shortage of lanes you can go into and do good.” Miranda’s own efforts have included several recent collaborations with other musicians and composers in support of hurricane relief for Puerto Rico and for the movement against gun violence.

“That came out of being inspired by these kids,” Miranda said of “Found Tonight,” his duet with “Dear Evan Hansen” star Ben Platt in support of March for Our Lives on March 24. “We sort of made the Marvel/DC crossover. I asked myself: What’s the thing I can make for them that will put wind in their sails?”

If “Hamilton” is the origin story of American democracy — “It’s how Spider-Man got bit by the bug,” Miranda said with a laugh — his activism on current issues, including voter registration, hurricane relief, and speaking out against gun violence, are part of a chapter in that book.

“What we’re seeing is a huge accumulation of everyday voices,” Miranda said, praising the wave of activism and political engagement from many corners of American society. “The success of ‘Hamilton’ has given me a huge megaphone, and it helps me to think of it as a literal megaphone. I try to use it sparingly, so that what I say will be helpful.”

He closed by urging his audience to support each other and make their voices heard. “Our stories,” he said, “are more necessary than ever.”