New chapter for 'The Odyssey' 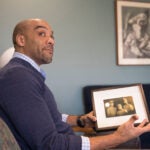 There are dozens of translations of “The Odyssey,” the ancient epic poem credited to Homer, yet Emily Wilson’s is the first by a woman into English.

“We should be shocked that the English-speaking world hasn’t had a translation by a woman,” Wilson said during a recent visit to Harvard. “Slightly more women than men get Ph.Ds. in the classics in the U.S., and yet the vast majority of translations that readers read in English for classics are by men. This is an issue, and we should talk about it.”

The British classicist, who teaches at the University of Pennsylvania, gave a lecture earlier this month titled “Translating ‘The Odyssey’: Why and How.”

“It’s very visible to me how misogynistic some of these translations are, and not because they were consciously imposing misogyny, but they had some unconsidered biases,” Wilson said before her talk. “Men are never asked about their gender, and this omission is seriously distorting. It’s very clear gender has an impact on men’s work.”

To a crowd in Sever Hall, Wilson, who first fell in love with the Greek tale from the eighth century B.C. at a staged production at her elementary school, made her case with side-by-side comparisons of her work with past translations. In one example, she compared the opening lines of Chapter 5, when the goddess of dawn awakes. She noted the 1614‒16 translation by George Chapman:

Aurora rose from high-born Tithon’s bed,
That men and Gods might be illustrated.

That translation empowers the man with ownership of the bed. Similarly, Alexander Pope’s 1725 version — The saffron morn, with early blushes spread, Now rose refulgent from Tithonus’ bed — reads as if the goddess were doing a “walk of shame.”

The best-selling modern translation by Robert Fagles from 1996 — As Dawn rose up from bed by her lordly mate Tithonus / bringing light to immortal gods and mortal men — suggests the only mortals are men.

Like Chapman and Pope, Wilson used iambic pentameter. Her version of these lines is: Then Dawn rose up from bed with Lord Tithonus / to bring the light to the deathless gods and mortals.

Wilson spent five years working on the more than 12,000-line poem, explaining that she aimed for a stylist register that would reflect the tension between poetic artifice and clarity. Her translation features words and phrases such as “pep talk,” “stuck up,” and “tote bag.” She explained her decision to avoid bombastic, archaic, or unidiomatic language by saying that such literary tricks don’t get closer to the original.

Wilson spoke at Harvard at the invitation of Richard F. Thomas, George Lane Martin Professor of the Classics. Before the lecture, students held a Homerathon, a marathon reading of “The Odyssey,” in Barker Café. Organized by Dean of Arts and Humanities Robin Kelsey’s office and his student board, the event brought together 42 faculty, staff, and students to read 70 excerpts over seven hours. Classics professor David Elmer chose verses from a dozen English translations, beginning with Chapman and Pope and including William Morris (1887) and T.E. Lawrence (1932). The day ended with Wilson reading her translation.

“The experience of hearing all of these versions is very Odyssean,” said Elmer. “The different translations are like the many disguises of Odysseus. It also felt appropriate to end with Wilson. Her reading included the final intervention by the goddess Athena, who directs the events of the plot. I loved the fact that the voice of Athena, the divine author, could be brought to life by the first woman to publish an English translation.”

Lauren Spohn, an English concentrator who helped organize the Homerathon, said she first fell in love with “The Odyssey” in Humanities 10 with David Carrasco, the Neil L. Rudenstine Professor of the Study of Latin America.

“On the first day, he asked students to tell their mother’s mother’s name, what language she spoke, what her longest journey was, and the hardest journey she’d ever faced,” said the 20-year-old, who read from the Robert Fitzgerald (1961) and the Fagles translations. “That just made me think: What’s my odyssey? And what will it be for the next four years? It’s a great story on so many levels because it’s so applicable in so many parts of our lives.”

Reading first in ancient Greek, then in English, sophomore Ben Roy said the public recitation made Homer’s language as relatable as the story.

“This is an oral tradition, so I think it’s especially relevant. We study the text, but it’s never meant to be told in that form,” the 20-year-old said. “There’s a certain simplicity to ‘The Odyssey.’ It’s meant to be easy to understand.”

Roy, who is concentrating in the classics, was thrilled to hear Wilson close the Homerathon.

“It’s a text that has been translated many times. Each translator’s own life comes through the text. The more variety among translators, the more different aspects of a life will come out. Being a woman, she has had different experiences from other translators. Her translation brings out what others have overlooked.”