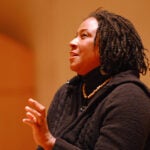 He is haunted by conflict between country and culture, revolution and redemption, embrace and exclusion, and, perhaps most of all, between a yearning to remember and the urge not to. And his prose brings those conflicts to life.

Pulitzer Prize-winning author Viet Thanh Nguyen was 4 when he first started trying to forget. After fleeing war-torn Vietnam with his parents for the United States in 1975, Nguyen was sent to live with a white sponsor family near Fort Indiantown Gap, Pa. Eventually he reunited with his mother and father, but that early experience as a refugee marked him “indelibly.”

“That’s when memory begins, and that’s when forgetting begins for me as well, because I spent much of my life trying to forget that experience of separation and of trauma — and trying to forget what it meant to lose a country. And then as a writer and a scholar I have been trying to remember what those things mean.”

Nguyen blended memory, political critique, and history in “The Sympathizer,” his debut novel about a double agent who escapes Vietnam to Southern California during the fall of Saigon. The book was awarded the 2016 Pulitzer for fiction.

Nguyen, a Radcliffe fellow in 2009, returned to the institute last week for a discussion with Gish Jen ’77, also a former Radcliffe fellow. As part of the visit he read from his 2016 nonfiction work “Nothing Ever Dies: Vietnam and the Memory of War.”

“I was born in Vietnam but made in America. I count myself among those Vietnamese dismayed by America’s deeds but tempted to believe its words. I also count myself among those Americans who often do not know what to make of Vietnam and want to know what to make of it. Americans, as well as many people the world over, tend to mistake Vietnam with the war named in its honor, or dishonor as the case may be. This confusion has no doubt led to some of my own uncertainty about what it means to be a man with two countries, as well as the inheritor of two revolutions.”

Writing down the stories he wanted to forget was always a dream, but how to give them the voice he felt they needed remained a mystery, said Nguyen. His time as a Berkeley undergrad — specifically exposure to Asian-American literature and his work in ethnic studies — helped. These encounters were “crucial to my sense that writing stories could also include the history, the identity, the politics that was so fundamentally important to me, that had shaped me.”

A long spell in literary purgatory helped shape his voice and style. Nguyen pursued his Ph.D. at Berkeley, became a professor at the University of Southern California, and toiled for years trying to teach himself the craft while developing stories that would be published years later in his 2017 collection “The Refugees.”

He called the experience “horrible.”

“I didn’t have writing teachers … so I was learning how to write and I was also trying to learn how to be a human being, trying to learn what it meant to be emotionally mature, to try to investigate how I felt about things.”

The struggle paid off. “Through that banging my head against the wall, the frustrations … when it came time to write a novel it felt totally natural,” said Nguyen.

The author opted out of an M.F.A. program and turned to academia, he told Jen, because he “didn’t believe in how writing is taught in this country.”

“Fiction that prioritizes the intimate, the emotional, the realistic, and all those things are important as aesthetic features, but they weren’t necessarily what I wanted to do,” he said. “I couldn’t see how I could take those kinds of aesthetics and write a novel like ‘The Sympathizer,’ that wanted to be an angry, in-your-face novel about politics, and a novel that would leave some room for ambiguity but that would also make perfectly clear what my critique of ideology, revolution, and America and Vietnam were all about. So yes, I had to become a scholar in order to write that kind of a book.”

Nguyen said he wasn’t interested in writing the great American novel, but a European version of the great American novel, modern and more skeptical “of this American way of being, of this American ideal” that tends toward romance and hope. He suspects his modern take is why “The Sympathizer” was rejected by 13 of 14 publishers and only accepted by an English editor who was of mixed race.

“That’s what it means to challenge majority privilege,” said Nguyen. “If you don’t force the majority to question itself, they are much more likely to give you a very nice book deal.”

During a question-and-answer session after the talk, an undergraduate from Afghanistan who had lived in a refugee camp said Nguyen’s work “helped her make sense” of her own writing and the world.

“How did you come to reach that emotional maturity [that enabled your writing] and what did that process look like?” she wondered.

The frustration and failure that accompanied his early years of writing helped him divorce himself from the drive for fame and success, Nguyen said, and left him only with “the importance of writing itself.”

The other key to unlocking his emotions was personal, he said.

“Getting married and having a child … that brought me outside of myself, that made me think about others.”