Paul Rudd honored as Hasty Pudding’s Man of the Year 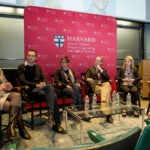 He’s been a fixture in Hollywood for more than a quarter-century and has a star on the Hollywood Walk of Fame. Now actor Paul Rudd can add Hasty Pudding Man of the Year to his list of accolades.

Rudd, who has appeared in films such as “Anchorman,” “Ant Man,” and “Forgetting Sarah Marshall” — in which he co-starred with 2018 Woman of the Year, Mila Kunis — was honored by the Hasty Pudding Theatricals with their annual award on today. A full day of festivities on campus awaited Rudd, including a tour of the Hasty Pudding clubhouse and Harvard Yard, fine dining, and entertainment ahead of his award ceremony. 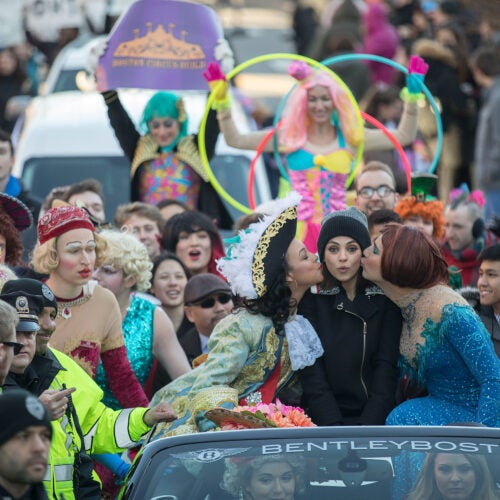 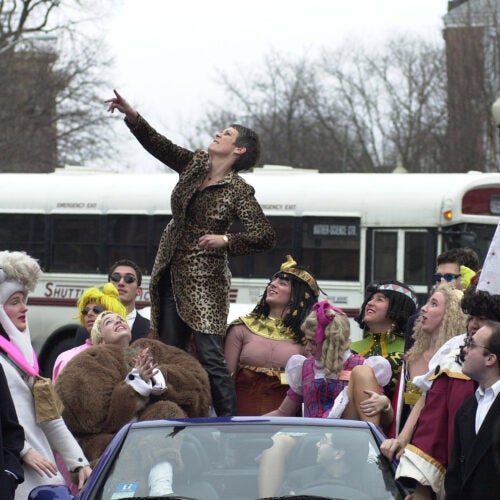 The day began at Farkas Hall, where he listened with rapt attention as students explained the history of the Hasty Pudding Club. He was then serenaded by the Radcliffe Pitches, Harvard’s oldest female a cappella group.

“Wow! That was incredible!” proclaimed Rudd following their performance, a thunderstruck smile on his face.

While screwing in the plaque bearing his name, the students complimented Rudd’s precision. “I do a lot of work around the house,” he joked. “This is a Phillips head. Normally I would do this with a drill, but I didn’t bring my Makita with me.”

The party then moved through the Square to tour Harvard Yard. Rudd then received his Pudding Pot tonight at the closing ceremony, where he was roasted by the club members and participated in their latest show, “Intermission Impossible,” the company’s 170th production.

“The whole day has been a blast,” Rudd said during the press conference that followed the roast. “It’s been great getting to see Harvard. I’ve never been here before. It was so profound to walk through the Yard and learn about the history. I’m a bit of a history buff, and to be here … was very moving.”

The big question of Rudd was who he was rooting for in the Super Bowl on Sunday. Without hesitation, Rudd emphatically responded: “I’m rooting for the Philadelphia Eagles. The Belichick/Brady combo is the greatest ever, but I’m sick of seeing the Patriots win.”

When asked which of his film characters he most identified with, Rudd said, “I think my character in “I Love You, Man” because he had that kind of insecurity that sometimes makes you say dumb things in certain situations — [such as] you’re rooting for the Eagles over the Patriots when you’re in Boston.”

The nation’s oldest theatrical organization, Hasty Pudding Theatricals awards its Pudding Pots to performers who have made lasting and impressive contributions to entertainment. Started in 1951, the Pudding Pot was given exclusively to women until 1967, when the club expanded the award to recognize men.

The Hasty Pudding award places Rudd in the company of Harrison Ford, Bill Murray, Paul Newman, and Tom Hanks, all past recipients.

Hasty Pudding made headlines following the Jan. 25 ceremony for Kunis when its president, Amira T. Weeks ’18, announced that the troupe will begin casting women in its shows. The group has included women for some time, but has only had males onstage.

Rudd made his acting debut in the NBC drama “Sisters” in 1992, and broke out as the love interest in the 1995 cult comedy “Clueless.” He would go on to star and appear in a series of successful films, from critically acclaimed cult classics such as “Wet Hot American Summer” to big-budget blockbusters like the “Avengers” franchise. Along with starring as the titular character, Rudd was a co-writer on “Ant Man,” which grossed more than $500 million worldwide.

Tickets for the performance can be purchased at http://hastypudding.org/buy-tickets. Visit the Hasty Pudding’s Facebook page for more coverage.