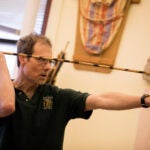 Hurtling back through time

On Sept. 1, 1795, 21 Harvard juniors gathered in a dorm room to found The Hasty Pudding Club. The club took its name from the traditional English dessert that was lugged across Harvard Yard in a giant cast-iron pot and dished out at their meetings. At a time when there were few social clubs on campus, the gatherings were a welcome respite for members, whose raucous mock trials against each other would evolve into the annual stage show produced today.

The club was more than 150 years old when it began awarding the Woman of the Year award in 1951 to performers deemed to have made a “lasting and impressive contribution to the world of entertainment.” In 1967, the group expanded the award to men, naming Bob Hope the first Man of the Year. Sixty-eight women and 51 men have been awarded the Pudding Pot since the tradition began. Honorees have included titans of the stage and screen, legendary comedians, iconic musicians, and even a first lady.

The student group made headlines last week when it welcomed 2018 Woman of the Year Mila Kunis to campus and announced it will begin casting women in its shows — the club has included women for some time, but has only had men on stage.

As the group prepares to toast 2018 Man of the Year Paul Rudd on Friday, the Gazette takes a look back at some of the luminaries the club has feted through the years.