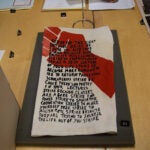 Connecting Harvard history to its surroundings

Smiling from ear to ear, Mila Kunis added her name to the wall of Farkas Hall this afternoon as Hasty Pudding’s 68th Woman of the Year. The award places her in the company of such stars as Lucille Ball, Diane Keaton, and Amy Poehler, all past Pudding Pot recipients.

The star of television and film was treated to a tour of Farkas Hall by Hasty Pudding. Wrapped in a wool coat and cap, Kunis braved the frigid New England winter for the traditional parade through Harvard Square on her way to the celebratory roast, Hasty Pudding’s trademark burlesque skits performed with Hasty Theatricals’ members, and a live-streamed press conference.

The award for Kunis came on the same day Hasty Pudding’s president, Amira T. Weeks ’18, announced that the student group will begin casting  women in its shows. The group has included women for some time, but has only had males on stage.

The Hasty Pudding Theatricals, the oldest theatrical organization in the country, has been awarding its pudding pot since 1951 to performers who have made lasting and impressive contributions to entertainment.

Kunis catapulted to fame as the spoiled Jackie Burkhart on Fox’s “That ’70s Show” in 1998. She is an original cast member of the popular animated series “Family Guy,” for which she voices perennial scapegoat Meg Griffin.

Kunis’ breakout role came in 2008’s “Forgetting Sarah Marshall,” in which she co-starred alongside 2018 Man of the Year Paul Rudd, who will accept his award next week. Kunis garnered critical acclaim for her portrayal of the titular character in the 2010 psychological thriller “Black Swan,” co-starring opposite Natalie Portman ’03.