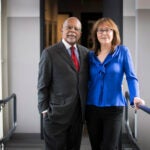 Witches and plucky girls, princesses and vampires: In fairy tales, at least, females have power. While feminism has long mined fables and folk tales for both archetypes and answers, filmmakers have done the same to create arresting heroines and villains, along with strong characters who straddle the line.

Citing these tales as “magic mirrors” for our unseen selves, Katie B. Kohn, a doctoral candidate in film and visual studies at Harvard’s Graduate School of Arts and Sciences, has curated a film series on “Feminism and the Fairy Tale” for the Schlesinger Library at the Radcliffe Institute for Advanced Study. The ongoing series (three films remain) picks up again on Feb. 8 with 2015’s “Ex Machina,” which will be shown with a featurette of trailers on the theme of “Beauty and the Beast.” The series, which runs through April, is free and open to the public. The programs, held in the library’s Radcliffe College Room, begin at 6 p.m.

For Kohn, who last year curated a film series on the theme of girlhood, fairy tales are both timeless and, in some ways, incredibly timely. As a teaching fellow with Maria Tatar, John L. Loeb Professor of Germanic Languages and Literatures, in the program of Folklore and Mythology, which Tatar chairs, Kohn notes how these tales have returned to prominence recently. “There’s an incredible wealth of material out there,” she said in an interview. “It seems like every month someone is publishing a redone tale.” 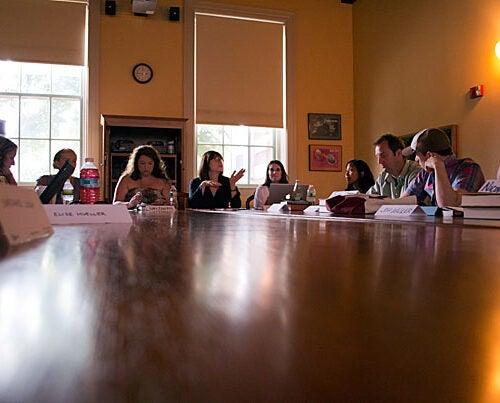 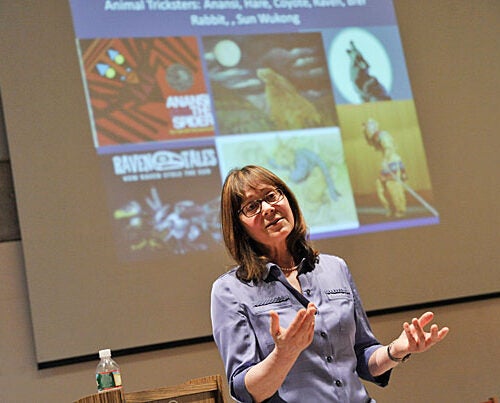 Her own interest in these stories was piqued when she taught an intensive pre-college creative writing course last summer on “the power and politics of fairy tales.” The high school students who signed up all happened to be young women. The focus, she said, “wasn’t explicitly feminist but on female storytelling.”

“Evil women and evil girls in particular” proved to be of particular interest, she said. “The moral ambiguity of power is a fascinating topic for young women.”

The intensive, two-week program culminated with the students crafting their own tales, and Kohn is herself at work on a young-adult novel. However, her academic focus on film made sharing cinematic versions of these tales an obvious choice. The challenge, she said, was reaching beyond the usual.

“There’s obviously a huge wealth of fairy-tale film adaptations,” she said. “But I didn’t want to just put on films that people are likely to have seen or can watch on Netflix. The whole idea is to get people out from behind their screens and have a communal experience.”

Communal and universal: In addition to showing lesser-known and older movies, Kohn sought diversity beyond the white, European versions of these tales. Her March 8 feature, for example, will be the Guatemalan “Ixcanul” (Volcano). The first feature film in the Kaqchikel Mayan language, this neo-realist movie presents the story of Maria, who lives and works on the slope of a volcano and seeks to escape from the marriage her family has arranged for her by immigrating to the U.S. It is, said Kohn, “essentially a strange, dark, inverted Cinderella story. A young girl lives in a land of ashes. She’s doomed to an arranged marriage and dreams of how can she escape.” (The series’ final film, “The Love Witch,” a 2005 film described as “feminist high camp,” will be shown on April 19.)

“All of the films have these really, really dark elements, even when they originate as somewhat lighthearted or warmhearted,” noted Kohn. “Feminist authors tend to tease that out.”

Some of that darkness may be the times, if not the season. “There’s always a fascination with dark stories,” Kohn explained. “But right now people have identified their lives as out of sync with what they thought they should be.”

Some of that dark undercurrent, she said, may simply be a question of gender and choice. “The kinds of stories that women tell themselves when they want to get serious are fantasy stories, fables,” she said. “Stories that show that horror is out there in the world.”