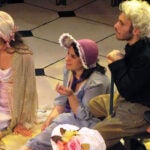 From ‘Emma’ to ‘Charlie Brown’

Women in fairy tales and fantasy literature can be portrayed as weak, warned away from danger rather than encouraged to explore its possibilities. The restrictions present limits on young girls at impressionable ages.

But their own story would not have happened if they had not been selected to attend the National Endowment for the Humanities seminar course on fairy tales and fantasy literature, “Golden Compasses as Moral Compasses: The Ethics and Aesthetics of Fairy Tales and Fantasy,” at Harvard University.

“Meeting each other was serendipity,” said Logan, who teaches in Snoqualmie, Wash. “We live in the same state, two hours apart, but the odds of meeting each other are not good.  It is like something out of a fairy tale.”

Logan and Mueller were among 16 teachers selected — out of the 250 who applied — to attend the four-week summer school program for teachers. Maria Tatar, chair of the program in Folklore and Mythology and John L. Loeb Professor of Germanic Languages and Literatures and of Folklore and Mythology, led the seminars.

“This was life-changing,” Logan said. “Plucked from obscurity to the greatest university on the face of the planet, to be taught by somebody whose fingerprints are all over the Web, Wikipedia, blogs, everything.”

Tatar, whose most recent book is “Enchanted Hunters: The Power of Childhood Reading,” said she was just as impressed with her students. “This is an elite group of teachers,” she said.

The group of women and men was from a mix of backgrounds — public, private, and alternative schools. On the final day of the seminar, July 19, they sat around a rectangular oak table and batted back and forth the effect of Lewis Carroll’s “Alice in Wonderland,” J.M. Barrie’s “Peter Pan,” J.K. Rowling’s “Harry Potter” series, and Suzanne Collins’ “The Hunger Games.”

Nicole Guillen, a high school teacher at the Alliance Marc and Eva Stern Math and Science School in Los Angeles, said the fantasy of Lewis Carroll or “Peter Pan” read by older generations may not be as relevant to today’s students as the violence depicted in modern literature.

“They’re growing up where gangs are part of everyday life,” Guillen said. “In some communities, what kids see is very real and it’s a horrifying type of reality, and that’s why they like seeing it in a book: I don’t have a Wonderland or a Neverland, but I do have this reality.”

Elizabeth Gray, who teaches at an alternative East Brooklyn, N.Y., high school, countered that escapism is an important part of fantasy literature.

“I teach a lot of gangs; I’m not sure they always want to read about gangs,” she said. “They might prefer to read about Neverland. I wonder if [“Hunger Games”] is too close to home?”

“Kids like to imagine what kind of kid they would become,” Bielefeld said. “I can hear my kids do that with ‘Lord of the Flies’ and with ‘Hunger Games.’”

“Hunger Games” heroine Katniss Everdeen is one of the stars of Logan and Mueller’s “Seven Sisters.”  The book also features Ishtar, the Assyrian and Babylonian goddess of fertility; Psyche of ancient Greece; Morgan Le Fay of the King Arthur legend; Spider Woman of the Hopi Indians; Janet of Scottish lore; and Meg, the protagonist of the American science fantasy book “A Wrinkle in Time” (1962).

Tatar believes Logan and Mueller’s collaboration can be published.  The two teachers have already created the book’s design, which has a red cover to look like a girl’s journal, but closes with a mirror on the inside back cover to reflect the true heroine: the young girl reader.

“We had a shared vision about girls and helping them through middle school,” said Mueller, from Bellingham, Wash. “It’s tough having that feeling of disempowerment. The moral tended to be, ‘Don’t open the box, girls. Stand in line for the right thing.’ represent women in a positive way.”