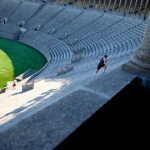 Witches, wolves, and wicked stepmothers, oh my! They are the stuff of legend, and a goldmine for Hollywood, which regularly taps a seemingly insatiable public appetite for fantasy and folklore.

The recent big budget remakes “Red Riding Hood” and “Snow White and the Huntsman” are just two of the countless film adaptations of the seductive and savage tales by brothers Wilhelm and Jacob Grimm. The forthcoming film “Witch Hunters” recasts Hansel and Gretel as young adult bounty hunters seeking revenge on evil witches as payback for their traumatic time in the deadly gingerbread house.

What makes such stories — at times beautiful, at times horrific — so enduring?

Can the lure of children’s tales originally brought to life around the hearth in spoken form — what John Updike called “the television and pornography of an earlier age” — and later in the pages of elegantly illustrated books, survive the onslaught of technology?

The John L. Loeb Professor of Germanic Languages and Literatures and of Folklore Mythology explored how fairy tales have migrated through centuries and across cultures into a world of movie screens, iPads, Kindles, Nooks, and increasingly short attention spans. Her talk was part of the John Harvard Book Celebration, a program of events at Cambridge and Boston public libraries to commemorate Harvard’s 375th anniversary.

Though often wildly commercialized, the stories have maintained their vicelike hold on the imaginations of countless generations, said Tatar, through their most basic ingredient: magic. “They are stories that I see as massive, potent, and mysterious in many ways … they have a mythical quality to them. They’re not just old wives’ tales that can be easily dismissed. I think they are stories that we listen to and that we internalize, that we keep with us.”

Tatar decided to investigate the tales further after reading her young children the Grimm tale “The Juniper Tree,” the story of an evil stepmother who beheads her stepson and serves his body up in a soup. She is ultimately crushed to death by a millstone.

“I started getting very worried” as the story progressed, said Tatar. But her children were enthralled. “They wanted me to go to the end.”

She has been studying fairy tales ever since, researching how they have morphed from an oral tradition geared to a multigenerational audience into books infused with moral lessons and read by adults to children in the hopes of “scaring them into good behavior.”

“Instead of ‘What if?’ we’ve suddenly got stories that move in the mode of ‘or else.’ ”

The lasting power of fairy tales lies in their potential to be reworked and reimagined in endless ways, said Tatar. In the 1960s, writers began tweaking and twisting them, rendering the big bad wolf a misunderstood victim, and the scheming Rumpelstiltskin an honest laborer. But the stories never lost “any of their narrative mass.”

Even the highly commercialized Disney empire, keeper of fairy tales during the past century, has scored “direct visceral hits” with films that have captured the “power and the melodrama of the stories in their original form,” she said.

Rather than dampening the appeal of the stories, such rewriting revives them, calling attention to the source material while creating playful new versions, said Tatar. The digital age, she offered, one oriented toward the sound bite and the 30-second video clip, helps the stories reclaim their multigenerational appeal by “amplifying” their mythic qualities.

“These are the stories that thrive in a culture of sound bites and miniaturization, and in a culture of distraction, their magic is nomadic,” said Tatar. They lend themselves to the new electronic medium largely because of what they don’t offer the reader, she added.

“Most of these stories are really short and we have to fill in a lot … we feel a compulsion to talk about them, to figure them out because we have so little information.”

In addition, the tales continue to resonate because they tackle complicated cultural anxieties. The world couldn’t stop discussing the Dominique Strauss-Kahn case, Tatar said, because it tapped into notions of innocence and seduction, the central themes of “Little Red Riding Hood.” “Beauty and the Beast” addresses monstrosity and compassion; “Hansel and Gretel” touches on hostility and hospitality.

The tales investigate “simple expressions of complex thought,” and through “a stunning economy of means they manage to produce thunderous effects.

“As cultural taboos are made or undone, our stories are refashioned,” said Tatar, “and that’s why to me [fairy tales] remain relevant today, even as they present this wonderful whiff of the archaic.”

Roxbury resident Rodney Singleton was impressed by Tatar’s emphasis on the deep cultural appeal of fairy tales. “I thought it was pretty compelling,” he said. “I never thought of them as tales for grown-ups, but I guess that’s true.”

The next John Harvard Book Celebration event, “Telling War Stories: Reflections of a Civil War Historian,” will feature Harvard University President and Lincoln Professor of History Drew Faust. The lecture will be held April 10 at 6 p.m. at the Boston Public Library, 700 Boylston St.