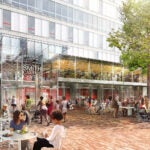 Serving up community and sustainable fare

Brooms at the ready, Harvard’s curling team thrives on the ice

To understand the sport, picture a combination of darts, croquet, and bowling. Only there are brooms instead of mallets, and special nonslip shoes, and dart stand-ins that are finely polished granite stones weighing 40 pounds apiece, and they’re slid along a long narrow strip of ice called a sheet to a bull’s-eye that’s called the house.

Got that? Good. You’re ready for curling season.

Friday marks the opening of the Olympic Games in Pyeongchang, South Korea, where one of the winter competition’s quirkier events will again attract viewers who often start off unsure what to make of it, and end up fans. Many who give it a try are instantly hooked. Just ask Washington Redskins tight end Vernon Davis or Harvard junior Neekon Vafa, president of the Harvard University Curling Team.

Vafa paid little attention to the sport during the Winter Olympics in Russia in 2014, but when he connected with Harvard’s team his sophomore year to cross curling off the bucket list he drafted in high school, he caught the bug and “has been doing it ever since.”

Step on the ice and experience curling in a 360-degree video on Facebook.

“It’s a game of inches,” and similar to any sport that requires accuracy, precision, and repetition, said Vafa, a joint concentrator in math and computer science who loves the tactics involved in the game some call “chess on ice.”

“You’ve really got to think through what exactly the best shot is given the likelihood the [other team] can make certain shots and the strategy that they might have.”

Whichever team gets more of its stones closer to the center of the target on the ice, wins.

Harvard’s team travels to New York and Maine for tournaments, or bonspiels. They practice and play their home events at the Broomstones Curling Club in Wayland. The Crimson curling program is small, in part because most people arrive on campus with little or no experience in it. “The interest in general for curling isn’t necessarily too high. That’s something we’re definitely trying to change,” said Vafa.

Their record at last year’s national competition may have helped boost their numbers. The team finished fourth in the country at the 2017 USA College Championships.

The upcoming Olympics could help, too. This year, Vafa said, there’s more interest in the team, “and we are excited for what could happen.”