For answers on coral conservation, she followed the fish 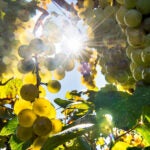 As climate changes, so will wine grapes

Spending hours a day diving around the coral reefs off St. Croix might sound like the stuff of a dream vacation, but for Annie Opel ’17, it was serious business.

Opel spent much of her Virgin Islands adventure on thesis research that shows that efforts to restore coral reefs have a positive impact on fish populations, both short- and long-term. The study was published in the December issue of Marine Biology with Opel as first author, a rare accomplishment for an undergraduate.

“Reefs are not only biologically important — more than 4,000 species of fish rely on these ecosystems — they’re also really important for humans,” Opel said. “We depend on them for commercial and recreational fisheries, they provide protection for coastal communities, and they bring in a great deal of money through tourism.

“But right now they’re threatened by a number of anthropogenic inputs, from pollution to the effects of climate change,” Opel said. “Coral reefs have experienced bleaching and mass mortality all over the world, causing ecosystem degradation that affects the marine life that rely on the reefs to survive.”

While there have been efforts to counter those threats by transplanting corals grown in underwater “nurseries” to damaged reefs, the impact of such projects on Caribbean reefs has been an open question, Opel said.

“In St. Croix, they’ve been restoring corals since 2009,” Opel said. “[But] no one is really looking at what’s happening after the fact … so no one knows if this is an efficient way to restore reef systems.”

What she found, Opel said, is that as little as a week after the introduction of experimental coral beds, significantly more fish and a greater diversity of species appeared. The research also showed that, over time, the fish community changed as additional species began visiting the sites.

“Overall, it’s a success story — we outplanted corals and there were more fish,” she said. “That’s really exciting and something people took for granted in these restoration projects, but no one had quantified it before. I think it’s going to be interesting for future studies to use this as a benchmark to know what’s going on after transplanting corals.”

During a post-high school gap year, Opel worked with the Nature Conservancy on coral restoration projects in St. Croix. As a sophomore at Harvard, she joined the lab of Colleen M. Cavanaugh, the Edward C. Jeffrey Professor of Biology in the Department of Organismic and Evolutionary Biology, and later proposed the coral study for her senior honors thesis.

The project was helped along the way by Cavanaugh and postdoctoral fellows Joey Pakes Nelson and Randi Rotjan, who is now an assistant professor at Boston University.

“This work was really cool for a variety of reasons,” said Nelson, an invertebrate biologist and ecologist. “As a global community, we spend a lot of money on coral reef restoration, but few studies describe how this practice affects the reef community, so Annie’s work provides justification for investments in this type of conservation.”

Opel “had great resources because of her work in the Nature Conservancy, she knew about transplanting corals, she had diving experience, and she had a great question,” Nelson added.

“I went down to St. Croix in March over spring break and in collaboration with other researchers, outplanted four 2-by-2-meter plots of an endangered species of coral found in the Caribbean called Acropora cervicornis,” Opel said. “We also designated control plots 10 and 20 meters away.”

Opel returned to the island at the end of the academic year to plant four additional plots and then began the hard work of collecting data almost entirely on her own.

“Each survey day, I spent two hours underwater where I took five-minute surveys on each of my 16 plots,” she said. “I sat there with underwater paper and a clipboard, and I would basically mark every fish I saw for that five minutes. It was a steep learning curve, because I needed to learn how to identify every species of fish by sex and age before I started taking my surveys. I took surveys three times a week for all 16 plots, and I counted something like 15,000 fish in total, so it was a lot of sitting underwater in my bright orange wetsuit counting and identifying fish.”

One of the most challenging parts of the project, she said, was finding partners to accompany her on dives.

“For safety reasons, you always dive with another person,” Opel said. “But it’s not like I had an assistant or anyone working with me, so I had to crowdsource my volunteers. I asked around at local dive shops in St. Croix and got put in contact with a lot of great people who wanted to help me with my research. One day my dad even came with me, so that was really special.

“One of my favorite parts of the paper is the acknowledgments, because I got the chance to thank all the volunteer divers and all of the people who helped make this project happen. And I am really thankful to have had three rock-star female scientists to mentor me through this academic journey.”

This research was supported with funding from the Harvard College Office of Undergraduate Research and Fellowships, Harvard University Center for the Environment, Museum of Comparative Zoology, Marine Conservation Action Fund, and the National Science Foundation.