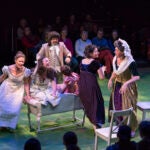 Bringing out the edge in Austen’s wit

You could never accuse Matt Aucoin ’12 of lacking creativity. Among the young artistic marvel’s many College accomplishments were a prize for his senior thesis — a poetry collection — and a fellowship to study conducting at La Scala in Milan. Now he is returning to the American Repertory Theater (A.R.T.) with his latest venture — a fusion of music, song, and dance.

Similar to the A.R.T.’s drive to “expand the boundaries of theater,” the mission of the American Modern Opera Company (AMOC) is to “reimagine the experience of opera from conception to performance.”

“We define opera as the point where every artistic discipline collides,” said Aucoin, a pianist-composer and co-artistic director of the company, which is made up of 17 dancers, musicians, choreographers, directors, and composers in their 20s and 30s who are “the ungodly offspring of a traveling theater troupe, a rock band, and a new-music ensemble,” according to the AMOC website.

While the concept and name are modern, the company honors opera’s deep history, Aucoin explained by phone from his home in California, where he is artist in residence with the Los Angeles Opera.

“At its heart, opera is this idealistic striving toward the union of all the human senses,” he said. “That was the kind of crazy ambition of the people in 17th-century Florence who first tried to make this happen.”

Behind the company’s founding ethos, Aucoin added, “was the idea that it was possible to pay deep attention to not just the music, not just the poetry, not just the sets … but to treat it holistically.”

That approach will be on view Dec. 15-18 during “Run AMOC!” at the Loeb Drama Center, Oberon, and the Harvard Dance Center. Performances in the festival will include “Were You There,” a tribute to victims of police brutality featuring bass-baritone Davóne Tines ’09 singing spirituals and a new composition by Aucoin, and “A Study on Effort,” a mix of music and motion with dancer Bobbi Jene Smith and violinist Keir GoGwilt.

Creating an ensemble that could develop artistic connections while breaking new ground has long been a goal for Aucoin. The transient nature of the opera circuit, which requires singers and musicians to perform each month with different collaborators, and the rush to perfect new works with union-controlled orchestras on tight schedules has frustrated the young composer.

“It’s difficult to forge really deep artistic relationships in this world,” said Aucoin. “And I knew who my closest friends and favorite colleagues were, and so I wanted to gather a bunch of them together and make stuff.”

One of those friends is Zack Winokur, choreographer, dancer, Juilliard graduate, and co-artistic director of AMOC. He and Aucoin grew up only a few miles apart in suburban Boston, but never met until they were introduced in their mid-20s at a lunch hosted by a mutual friend. The connection was instant.

“He felt like an artistic soul brother,” said Aucoin, “and here we are.”

“We define opera as the point where every artistic discipline collides.”
Matt Aucoin

Juilliard, the famed New York conservatory, is one artistic thread that runs through the company (Aucoin has a graduate diploma in composition from the school). Harvard, whose robust arts scene has inspired many students to pursue creative careers, is another.

Tines took part in the Dunster House Opera Society (today Harvard College Opera), and was also president of the Harvard-Radcliffe Orchestra. The singer appeared in Aucoin’s “Crossing,” which premiered in Boston in 2015 under the direction of the A.R.T.’s Diane Paulus, and most recently with the San Francisco Opera’s premiere of “Girls of the Golden West,” by composer John Adams ’69, A.M. ’72, and librettist Peter Sellars ’80.

AMOC’s managing director is Jennifer Chen ’11, who served as general manager of the Bach Society Orchestra at Harvard. She met Aucoin while working on the Dunster House Opera Society’s staging of Igor Stravinsky’s “The Rake’s Progress.” The Harvard production remains a favorite among those she’s played a part in, said Chen, and was a “testament to both what students are able to achieve and what a container the University is for allowing students to do so.”

“A lot of these collaborations that germinated during that time have clearly lived on,” Chen added, “and these are people who I am still working with this many years later.”

Chen landed a job at the Boston Symphony Orchestra after graduation. Soon after, a project at the Peabody Essex Museum in Salem, where Aucoin was a resident artist, led to a reunion. That collaboration, Chen said, was a “prelude to AMOC.”

“Through that process I was evaluating what my next career step would be and decided to go to business school to gain some of the hard skills and a different perspective of what our work was in the arts,” said Chen who got involved with AMOC during her second year at the Yale School of Management, in 2016, and came on full-time after graduating this past May.

Company members share a vision for what the future of opera can be, Aucoin said, and have been “working in the world long enough both to get the lay of the land and to form opinions about what might be done better.”

And for the composer and his fellow artists, better can take many shapes and forms.

“A piece of ours [may] just have a violinist and a dancer and yet for us we hope that the way we stage it will feel like opera, for me in the way that some of the later Beckett plays feel like opera because they make you so intensely aware of pure sound and gesture,” said Aucoin.

AMOC will be back on campus Feb. 23 through March 4, leading workshops and performances and engaging with students during a 10-day residency sponsored by the Office for the Arts and the Office of the Dean of Arts and Humanities.

“We are just going to make ourselves available and will be doing the work that we would be doing otherwise,” said Aucoin, “but with the doors wide open.”