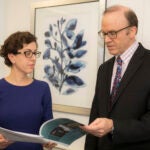 As chief of protocol since 2004, Jackie O’Neill has welcomed thousands of foreign dignitaries, overseen three Harvard presidential inaugurations, and orchestrated and emceed 14 Commencements, becoming the University’s quintessential host and grand diplomat in the process.

Even though she’s been the official keeper of Harvard’s traditions for so long, people still ask her what the University Marshal’s job entails. O’Neill fields the question with characteristic wit.

“I’m acutely aware of the fact that nobody really knows what a marshal does,” she said at her recent going-away party at the Faculty Club, to general laughter. “It’s the best job in the world.”

O’Neill, who started working at Harvard in 1976, will retire from that dream job at the end of the calendar year to allow University officials time to plan the 2018 Commencement and the likely inauguration of President Drew Faust’s successor. Faust plans to step down in June. Margot Gill, administrative dean for international affairs in the Faculty of Arts and Sciences, will become interim University marshal through June 2019.

At O’Neill’s going-away party, Faust praised her career, which was dedicated to “strengthening the University’s institutional ties with Cambridge and Boston and around the globe.” At Harvard O’Neill did everything from serving as a community-relations specialist in Cambridge and Allston to managing the president’s office for Neil L. Rudenstine to becoming Harvard’s first female marshal.

“We thank you for your wisdom, for your savvy, for your wit, for your grace,” Faust told the packed audience of friends and well-wishers. “You have made us better people and a better institution. I’m not sure how we’re going to survive without you, but I’m sure you’re going to have a good time.”

The first University marshal was Morris Hicky Morgan, a professor of classical philology appointed in 1896. The position’s responsibilities even then included organizing Commencements, convocations, and inaugurations, and planning the visits of dignitaries and distinguished guests.

Of all the tasks O’Neill has had at Harvard, planning and hosting the annual Morning Exercises at Commencement is closest to her heart. Since 2004, she has had a lead role as emcee of the ceremony, which officially starts when she urges the Middlesex County sheriff to “Pray, give us order.”

“Commencement Day is the most joyful day of the year,” O’Neill said during a recent interview at Wadsworth House. “It is the only time of the year that all the parts of Harvard get together. It’s just a fabulous moment in the Harvard calendar. There is no better day than Commencement, but the ones that have not been rained upon are a little more wonderful than the ones where the rain is coming down.”

O’Neill cherishes memories of meeting and sharing intimate moments with distinguished guests, who often relaxed and opened up about their dreams and concerns while sitting in Wadsworth’s parlor. Last year, O’Neill’s office hosted 847 foreign dignitaries from 52 countries.

She also relishes the special convocations she organized for South African President Nelson Mandela and U.S. Sen. Edward M. Kennedy, and the College’s 375th anniversary celebration in 2011, a yearlong series of programs that included exhibits, lectures, symposia, and a one-night celebration with live music, a festive parade, and a giant red-velvet birthday cake. Although it rained hard during that party, suspending the celebration for 20 minutes and leaving most of the audience looking like “wet rats,” the guests shook off the dampness, and the party entered the annals of Harvard’s lore.

O’Neill approached her job as chief diplomat believing that both notable and lesser-known guests should be treated with the same warmth and respect. Her flair for bringing people together and her knack for making them feel special are well-known. Some colleagues even thought she could have been a successful politician, something O’Neill never seriously considered.

“Jackie came to Harvard … to take charge of the University’s relations with Cambridge, which were none too good when she arrived,” said Derek Bok, Harvard’s president from 1971 until 1991 and from 2006 until 2007. “Through her combination of charm, good humor, efficiency, and effectiveness, she soon took actions that restored good feelings between the city government and Harvard and caused all the problems and misunderstandings to disappear.”

Clayton Spencer, who was Harvard’s vice president for policy from 2005 to 2011 and is now president of Bates College, praised O’Neill’s creative and organizational skills, her sense of joy, and her refined and sensible demeanor.

“On the one hand, she’s the most elegant person in the world, and on the other hand she’s totally down to earth,” said Spencer. “She has presided over magnificent institutional rituals for Harvard, and she has always included in those ceremonies a touch of joy and humor. She embodies all that is best about Harvard.”

For College students Raul Cuevas ’20 and Reade Rossman ’20, having O’Neill as their mentor during freshman year was a thrill. The two, whom O’Neill invited to her party, said they feel lucky to have had her support.

“Jackie is an incredibly generous person,” said Rossman. “Harvard can be an overwhelming place, and Jackie has always been there for me, giving me formal advice, caring about my social life, and rooting for me.”

Cuevas met O’Neill when she and Rossman approached him when he was having dinner alone at Annenberg Hall.

“As a freshman, I felt lost,” said Cuevas. “And then Jackie comes along with Reade, and she asked if I would like to join them for dinner. That’s just the person Jackie is. She’s really generous, and she became my mentor. Two months ago, I became a naturalized U.S. citizen, and she drove me over to Lowell and sat through the ceremony. I’m really blessed to have her in my life.”

A Dedham native, O’Neill was a high school teacher before she came to Harvard. She has some advice for students based on her own path to the University, which wasn’t particularly straight. She was a consultant for a few years, then joined Harvard’s payroll and left twice, once to help her husband run for office and then to raise her family. Shortly after coming back for the third time, she was appointed marshal.

“As far as my Harvard career goes, it was not planned,” O’Neill said. “When you talk to students and you see they’re very focused on how to get from here to there, it’s hard to explain that life is not necessarily a straight line, and is often meandering, full of twists and turns. You really never know where the road is going to lead.”