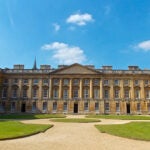 With the Harvard Kennedy School (HKS) campus renewal project nearing completion, members of the community, including Harvard President Drew Faust, celebrated a key achievement in the School’s history on Friday.

The event marked the culmination of many years of planning and construction. Dean Douglas Elmendorf thanked the many people whose “vision and generosity” created the interconnected campus that “will shape all of us who are and will be part of the Kennedy School family for many years to come.”

The Campaign for Harvard Kennedy School, which launched in 2011, has been transformative, Elmendorf said, providing “crucial resources to create a new campus, provide financial aid for students who could not be here otherwise, and expand our efforts to tackle the key challenges to public policy and leadership across this country and around the world.

The renewed campus, entirely funded by donations, adds 91,000 square feet to the School, including new convening areas, dedicated student spaces, and a redesigned central courtyard. Among the new spaces are six classrooms, including four flexible cluster ones designed to promote innovative teaching and learning, and 15 team rooms.

Quoting President John F. Kennedy ’40, Faust reminded the assembled crowd, “As we express our gratitude, we must never forget that the highest appreciation is not to utter words, but to live by them. As we thank all of those who made this building possible, let’s remember that the real thanks lie ahead, in the work we do here, in the ideas we create, in the better world we enable through the realization of the ideals of public service and the common good within these walls,” she said.

“What has then come and emerged from all this is a recognition not just that this place matters, but that our space matters. … We have gone from a series of buildings to being a campus,” said David Ellwood, Harvard University Distinguished Service Professor and Isabelle and Scott Black Professor of Political Economy, under whose tenure as dean the renewal project was developed and launched.

The campaign has allowed the School to expand its programming, including the new Cyber Security Project, the Social Innovation and Change Initiative, and digitalHKS, a program dedicated to digital transformation, innovation, and design.

Abigail and Leslie Wexner; Rubenstein; Robert, Renée, and Laurence Belfer; Idan and Batia Ofer; Glenn and Eva Dubin; Mort Zuckerman; and the Taubman family were among the top donors to the Campaign for Harvard Kennedy School. Les Wexner reflected on all what the campaign has enabled the School to achieve.

“This isn’t the end. It’s the beginning of the beginning,” he said. “There’s so much work to be done, so much good to be done, and so much positive influence that can radiate from this institution. And hopefully we can all stack hands and make the world a better place.”