The need to talk about race 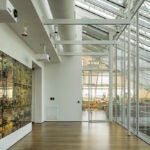 For the past 30 years, lawyer and social activist Bryan Stevenson ’85 has battled through the courts, defending wrongly convicted death-row prisoners and children prosecuted as adults, while condemning mass incarceration, excessive sentences, and racial bias in the criminal justice system.

Now Stevenson ’85, a graduate of Harvard Law School and Harvard Kennedy School, is about to embark on a fight outside the courts to start a national conversation about the painful legacy of slavery, which he said “continues to haunt us today.”

Delivering the 2017 Tanner Lecture on Human Values on Wednesday, Stevenson announced a planned memorial to honor more than 4,000 victims of lynching in the U.S. and a museum that traces the country’s history of racial inequality from enslavement to mass incarceration. They will be located in Montgomery, Ala., a cradle of the Confederacy and a birthplace of the Civil Rights Movement. The memorial and museum, scheduled to open in April, are part of Stevenson’s efforts to end the general national silence about slavery, lynching, and segregation.

“It’s critical at this moment in our nation’s history that we talk about race,” Stevenson told a packed crowd at First Parish Church in Cambridge. “Slavery didn’t end in 1865. It just evolved. It turned into decades of terrorism, violence, and lynching. And the era of lynching was devastating. It created a shadow all over this country, and we haven’t talked about it; we haven’t confronted it.

“The true evil of American slavery wasn’t involuntary servitude,” he said. “It was the narrative of racial difference, the ideology of white supremacy that we made up to justify slavery. That’s the true evil.”

Stevenson compared efforts in Rwanda, South Africa, and Germany to memorialize their own legacies of genocide, apartheid, and the Holocaust with the lack of memorials or markers in the U.S. to acknowledge its long history of racial inequality, particularly its deep history of lynching.

“Black people were kidnapped, taken out of their homes,” said Stevenson. “They were murdered. They were beaten. They were hanged. They were brutalized. They were terrorized, and they have never been recognized. And in the 20th century, we created one of the largest mass migrations the world had ever seen. Millions of blacks fled the American South. The black people who went to Cleveland, Chicago, Detroit, Los Angeles, or Boston didn’t come to these communities as immigrants looking for economic opportunities. They came as refugees and exiles of terror from the American South.”

Stevenson, a professor at the New York University School of Law, a MacArthur “genius” award winner, and founder and executive director of the Equal Justice Initiative, said he hopes that the upcoming National Memorial for Peace and Justice, the country’s first comprehensive memorial to victims of lynching, will help communities across the nation reckon with their past.

Between the Civil War and World War II, more than 4,000 African-Americans were lynched by white mobs, Stevenson’s organization has documented. The memorial will feature more than 800 columns, one for each county in the U.S. where lynchings took place, and the names of all the victims will be inscribed on the columns.

“We’re going to ask every community where a lynching took place to come to Montgomery and claim the replica of the monument for their community, to take it back and erect it in a prominent place,” Stevenson said. “It’s an effort at changing the iconography of America.” In Montgomery, there are more than 50 monuments to the Confederacy, he added.

Stevenson said it is also important also to acknowledge the legacy of enslavement in the present criminal justice system. One of three black men is in prison, on probation, or on parole, he said, and statistics say that one in three black males born today will go to jail at some point in his life.

Stevenson blames a misguided war on drugs and the influence of political leaders who have preached fear and anger, leading to long prison sentences, to prosecuting children as adults, and to mass incarceration.

Confronting the legacy of slavery will be hard and uncomfortable, said Stevenson, but it’s necessary to rescue the soul of the nation. Acknowledging the atrocities of the past can help change the narrative of racial differences and white supremacist ideology that persists today, and foster truth and reconciliation in its place.

“I do believe that this effort, in thinking who we are and how we come to be where we are, is a critical factor at this time in our nation’s history,” said Stevenson. “Narrative and memory are important if we’re going to create a just society. I think this work is critical to the success of the rule of law in this country.”

The event was hosted by the Mahindra Humanities Center in collaboration with the Office of the President at Harvard. President Drew Faust introduced the lecture, calling the sessions “one of Harvard’s great intellectual traditions.”

Afterward, Homi K. Bhabha, director of the Humanities Center, led a panel discussion on the issues of mass incarceration, racial injustice, and the death penalty.

Reflecting on her years on the bench, Gertner criticized mandatory minimum sentencing, a legal trend that was a product of the war on drugs that led to the surge in the number of African-Americans in the federal prison population.

Steiker spoke about the history of the death penalty in the United States and talked about its racial basis. The United States is the only Western democracy that uses capital punishment, she said, and is a leader internationally in doing so.