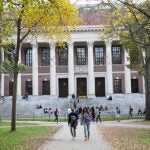 Though President Trump says he is not convinced that Russia interfered in the 2016 presidential election, U.S. Sen. Angus King of Maine said Monday that he and his colleagues on the Senate Select Committee on Intelligence, which is probing the matter, have “no doubt whatsoever” of Moscow’s involvement.

“We know they did it, we know it was sophisticated, we know it was serious, and we know they’re coming back!” said King during a discussion with Nicholas Burns, the Roy and Barbara Goodman Family Professor of the Practice of Diplomacy and International Relations at Harvard Kennedy School (HKS) Monday.

Though limited in what he could share publicly given the highly classified nature of the Russia inquiry, King said it is clear to the entire committee that Russia ran a sophisticated intelligence operation to interfere in the 2016 presidential election, and the members are sure Russia will continue to meddle in U.S. presidential and state-level races until they’re stopped.

Discussing what involvement, if any, some members of the Trump campaign might have had in Russia’s interference, he said the committee needs more facts before rendering a formal opinion. “That question is open,” said King, one of two independents in the Senate. He frequently caucuses with Democrats.

Asked by Professor David Gergen, a longtime White House adviser and now director of the Center for Public Leadership at HKS, whether the Intelligence Committee is likely to reach any bipartisan conclusions in its eventual report, King said, “The jury’s still out. I think it’s possible; we’re just not there yet. We just don’t have all the information.”

King believes it will be essential for the committee to put aside political loyalties and speak with a single voice. “My view is, if the American people are going to buy the conclusions of the report, it’s got to be almost unanimous.”

King sounded somewhat sympathetic to Trump, who does not acknowledge that Russia interfered in the U.S. election and suggests that, even if it did, no one from his campaign took part in that effort. King said Trump is conflating the two issues because he thinks the allegations of Russian meddling constitute an attempt to delegitimize his victory. But his repeated claims that the inquiries are persecutions, King suggested, undermine the country’s ability to take swift, decisive action against future interference.

“I understand where he’s coming from,” said King. “I understand that he doesn’t want to concede that this happened. The problem is: By calling it a hoax and a witch hunt, we can’t get the national consensus that we need that indeed the Russians did attack us and we have to prevent it from happening again.”

King said he hopes that Trump can separate the two issues and come out forcefully against Russian interference and promise some punishment, because thus far Russia has paid no price for what happened. Though the Senate voted 98–2 in late July to further sanction Russia for meddling, Trump has not implemented those strictures.

“This [kind of cyber assault] could keep happening long after he’s out of office,” King said. “It’s a frontal assault on our democracy, and we’ve got to treat it as such.”

Dan Balz, chief correspondent at the Washington Post and a fall fellow at the HKS Institute of Politics, asked whether the committee had seen enough evidence to render a position on whether the Trump campaign cooperated with Russia. King said he couldn’t answer because the investigation is classified.

But he pushed back on a notion posed by David Sanger ’82, a Pulitzer Prize-winning national security reporter for The New York Times and an adjunct lecturer at HKS, that Russia’s meddling was a failure of U.S. intelligence. An earlier assessment by Director of National Intelligence James Clapper and Secretary of Homeland Security Jeh Johnson made clear that the intelligence community wasn’t asleep at the switch, he said.

Rather, he said, factors contributing to the success of the intrusion included the Obama administration’s decision to be less vociferous in alerting the public about the meddling for fear of being seen as partisan, the FBI’s failure to adequately alert the Democratic National Committee after the bureau discovered it had been hacked, and the mistake made by a staffer in the office of Hillary Clinton’s campaign chairman, John Podesta, to open a phishing email.

There were “lots of failures along the line,” he said.