The world according to Conrad 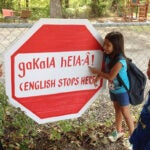 Maya Jasanoff has traveled in 70 countries, the 70th being the Democratic Republic of the Congo, which she visited last year to do research for her new book, “The Dawn Watch: Joseph Conrad in a Global World.” Along with re-tracing Conrad’s adventures along the Congo River, the Coolidge Professor of History spent four weeks aboard a French cargo ship, sailing between China and northern Europe in a time-travel-style effort to better appreciate the era in which her British-Polish subject lived and worked.

Jasanoff’s numerous honors include the 2017 Windham Campbell Prize for nonfiction and the 2011 National Book Critics Circle Award for nonfiction for “Liberty’s Exiles: American Loyalists in the Revolutionary World.” She spoke to the Gazette about her journey into the life of Conrad.

GAZETTE: Why did you write this book?

JASANOFF: I wanted to solve a problem for myself. I had worked a lot on the rise of the British Empire and I was interested in what its global reach was during its pinnacle of power, about a century ago. This is the world readers know best through poems like Kipling’s “The White Man’s Burden.” But the greatest novel I had ever read, “Heart of Darkness,” offered a very different perspective on imperialism. As I thought of Conrad more, I wondered: How did the same guy who wrote about imperialism in Africa write about terrorism in London [“The Secret Agent”]? How did the same guy who wrote about seafaring in so many novels write about capitalism in Latin America in “Nostromo”? The puzzle was basically figuring out what Conrad’s world looked like. It was very much at odds with that Pax Britannica image.

GAZETTE: You re-traced the 1,000-mile journey Conrad made down the Congo River more than 100 years ago. Why was it important to take the trip?

JASANOFF: Conrad wrote his books based very much on his experiences of the world as a sailor and immigrant, so I thought there was something important in capturing that experience of these things, especially his being a sailor for so long. Writing was a second career for him. He was a sailor until his 30s. I felt like I couldn’t get insight into what made him tick without being on boats and at sea.

With respect to “Heart of Darkness,” there’s a lot of debate regarding the representation of Africa in that book, and discussion about whether he is generalizing grotesquely or capturing pretty specific historical realities. I felt one way to approach this question meant going to the place and putting the two theories in conversation with each other.

As historians we can never meet our sources. We can never talk to them, see the world they lived in. The best we can do is see the fragments left behind. What’s left behind is some of what’s there today. It is a valuable source — seeing places you write about. I felt, in this case, it was doubly important.

GAZETTE: Conrad had to balance tension between his Eastern European upbringing and his life and work in the West, and sailed for some 20 years before settling down. Was the author’s identity struggle appealing as a foundation of the book?

JASANOFF: I’m drawn to people who don’t fit neatly into boxes. I wouldn’t want to put him neatly in a box. … That said, he, like many who are dislocated, was constantly navigating where he’d come from and where he’d arrived. Many people respond by putting away the first identity; some do it by doubling down and rejecting the new identity; and a third option is to do both. I come from a family of immigrants — my mom’s from India, my dad was born in America. How you fit identities together is something I’m very interested in. From my own experience, it doesn’t have a simple answer.

Conrad went back to Poland later in life and stayed in touch with relatives — it was a real part of him. He never gave that up, yet he was proudly British. He married an Englishwoman. He went back and forth between them his whole life. It’s one of the reasons he seems such a man of our times as much as his own. Today the largest foreign-born population in the U.K. is Poles. When Conrad was there, there were almost none.

GAZETTE: “The Dawn Watch” is part literary criticism, part history, and part travelogue. How challenging was it to write all three genres into one book?

JASANOFF: I wanted to write a book that wasn’t a beginning-to-end chronological history told by an offstage narrator. I moved across these registers, in part, to deal with the competing chronologies. In my last couple of books, I looked at a historical phenomenon through individual lives, but in this book I had a whole other layer in the form of the fiction. I had two versions of a lead character: the actor and the memoirist. In general, most narrative history gets written in a linear way with an omniscient narrator, but I took a cue from Conrad, who was used to telling stories in many voices, jumping around and making a mess of narrative lines. In a sense I wanted to follow Conrad’s method a bit and give the reader a little credit. Having abrupt breaks and shifting perspectives would be fine because that’s how we follow so many film and fiction narratives now.

GAZETTE: What did you make of the sailor experiences — his and yours — that made their way into the book?

JASANOFF: People have only lost the experience of sea travel in the last couple of generations. Until the 1960s, it’s how everyone traveled. Even my own parents did. I became aware that everyone used to travel like that. Everyone I’ve ever written about traveled like that. There are lots of recreational sailors today — though I had never learned to sail — but I realized that to understand Conrad I really needed to take a long sea voyage, not a recreational sailing trip. So I spent a month at sea. It gave me insight to how he wrote. Conrad has a very innovative narrative style, and it leaves you wondering, “How did he come up with that?”

Being on that ship for a month gave me insight into that. Sailors are known for spinning yarns and part of the reason for that is they spend all of this time in a very small, isolated community. The only way to bring in something from the outside is by telling stories about it. That really clicked for me in a way it wouldn’t have if I hadn’t gotten on that ship. I was also interested in how Conrad was involved in one of the foundations of our own globalized world. Nowadays sea travel is a lark, but maritime trade is happening more than ever before.