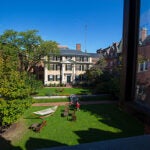 A group of disaster-relief experts with a passion for rock ’n’ roll will hit the stage to help communities recovering from Hurricanes Harvey, Irma, and Maria.

Michael VanRooyen, head of the Emergency Medicine Department at Brigham and Women’s Hospital and director of the Harvard Humanitarian Initiative (HHI), said that the cover band formed mostly just to have fun, but that members soon began to think about performing for an audience and to wonder whether, by doing so, they could help people in need.

So, when the A.R.T.’s Oberon  theater in Cambridge approached The Big 6 about doing a hurricane benefit, band members immediately said yes.

Though the show will include songs by some contemporary artists, it will be heavy on older classics, VanRooyen said. Band members will pick up the cost of the Nov. 12 concert so that all of the proceeds can go to hurricane relief through the nonprofit Direct Relief International.

The band consists of Valerie Dobiesz, a bass player and an emergency physician; fellow ER doctor Tim Erickson, a guitarist and toxicologist; drummer Sam Plasmati, who coordinates HHI’s education programs; Isaac Baker, who learned guitar by listening to Led Zeppelin and today is a specialist in remote imaging of disaster areas; and keyboardist Katie Farineau, who works with Baker on HHI educational offerings and whose own hurricane experience left a lasting impression.

“In high school my home and hometown were flooded by Hurricane Irene, in 2011,” she said. “As someone who was on the receiving end of aid, you know how important it is that people pay attention to you and people remember what your community has gone through long after the press has left. An event like this really helps to emphasize that these situations are ongoing. If we can do just a little bit helping their recovery, I think that would be wonderful.”

Farineau was a high school senior in Schoharie, N.Y., when Hurricane Irene hit as a tropical storm. She watched floodwaters from the Schoharie Creek spread through town, eventually reaching halfway up the first floor of buildings on Main Street.

“It was a really significant event in my life and led to me working at HHI now,” she said. “I was once someone on the ground in that situation — though not as serious as in Puerto Rico, obviously. But you know it’s important to be there, to be listening to folks in need, and give something back.”

Of the three disaster zones, the band members expressed particular concern for Puerto Rico, which had the weakest infrastructure to begin with and, as the last region to be struck, might face a reduced donor pool.

“People do get fixated and then jump to the next disaster. That’s when people truly get forgotten,” said Erickson, who, in addition to his role in Brigham’s ER is working on HHI projects in Syria, Ukraine, Nepal, and India.

“We’d like to focus on all the hurricanes, but … the dilemma in Puerto Rico strikes a tone with what we’re trying to accomplish at HHI, not just internationally, but domestically. You don’t have to go that far down the block to find people in need and those that are vulnerable.”