In surge of strawberries, some dirty details 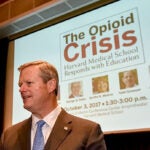 When she was young, Julie Guthman’s father enforced “intense food restrictions.” Even treats had to be good for you — whole-wheat cookies, carob chips, honey that tasted “horrible.”

What that meant in practice was that she had to visit her friends’ houses to gorge on junk food.

“I loved to eat Wonder Bread rolled up into a ball,” said Guthman.

Healthy eating is easier (and tastier) these days than it was back when she hid the fast carbs, but there’s still plenty of room for improvement, Guthman says. The professor of social sciences at the University of California, Santa Cruz, has spent much of her academic life studying dietary advice and the challenges of balancing equitable access to food with supporting sustainable crops that are labor- and environmentally friendly. As Frances B. Cashin Fellow at Radcliffe, she’s looking at the strawberry as a case study.

Guthman will research a forthcoming book in which she’ll explore how growers, buyers, and scientists, along with the characteristics of plants, soils, and climate in California, have combined to transform the popular berry from a summer treat into a year-round staple, diminishing taste and harming both farmworkers and the ozone layer in the process.

“Through interviews with growers on regulatory restrictions, I really started to see how so many different social and ecological factors have conspired to make it truly difficult to grow strawberries without fumigants,” said Guthman, who started thinking about the project while finishing her 2011 book on obesity, “Weighing In.” At the time a regulatory battle was brewing over methyl iodide, a compound that many hoped would replace methyl bromide, a pest-killing strawberry fumigant destined for international phase-out as an ozone-depleting chemical.

“I was curious whether knowledge about the potential epigenetic effects of the more toxic methyl iodide had entered into the regulatory debates,” she said. “The answer was no, but it did lead me to study how growers were contending with the methyl bromide phase-out in California, where 90 percent of U.S. strawberries are grown.”

Methyl bromide is still used in California because of an exemption that allows it in strawberry nurseries. “It has to do with having to sell clean plants,” said Guthman, who plans to devote a chapter in her new book to the chemical. “California strawberry nurseries supply much of the world’s strawberry starts and you can’t sell plants that have viruses, so even organic growers are getting fumigated starts.”

Partly due to consumer protests, methyl iodide was never widely adopted, and it was taken off the market in 2012, Guthman said. Today growers rely heavily on chloropicrin, or tear gas, which was once used in combination with methyl bromide. Consumers have little to worry about, Guthman said, because the fumigant dissipates in the air before fruit is planted, never coming into contact with a mature plant’s berries. Those who work, live, or go to school near fumigated fields are at greatest risk.

Guthman’s book will also address strawberry breeding and recent developments in genomic marking. Originally, there were infinite possibilities in strawberry breeding, said Guthman. But the industry has generally bred for shelf life, size, and color, “and not so much for taste, and unfortunately, not for pathogen resistance, which has now emerged as a high priority.”

Guthman followed a winding path to food studies. After college she organized voter registration drives in California. Later, having earned an M.B.A. at the University of California, Berkeley, she became a nonprofit financial manager. Needing a break from crunching numbers, she visited Southeast Asia, where the lush landscapes struck a chord.

That interest led her back to Berkeley for master’s and doctorate degrees in geography. Her next turning point came in a class focused on restructuring agro-food sectors around the world. It was the early 1990s, and expensive organic products had begun popping up in her local supermarket. Meanwhile, restaurants inspired by the nearby Chez Panisse, famous for using organic, locally grown ingredients, were taking off. Guthman pitched the idea of studying California salad mix, and she and her classmates “wrote an article that became the seminal article on organics in social science research. That’s what really got me started.”

Today she’s still pushing for change and for a sustainable model for food.

“We really need to find an approach beyond marketplace alternatives that allow privileged people to buy their way out,” she said. “We need to not only regulate enough so that growers are forced to use different technologies, but we need to provide those aiming to grow more sustainably with enough assistance through things like research and extension, and subsidy and crop insurance programs.”

Guthman will give a talk titled “Social Justice and the New Food Activism” at 4:15 p.m. Thursday at Knafel Center.