Music and meaning, the Marsalis way 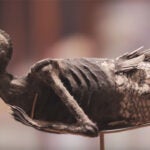 Talking with President Faust, jazz great explores the transcendence of creativity and artistry

“In a few minutes, we are going to talk about improvisation. You are about to see it,” Harvard President Drew Faust told the crowd at Sanders Theatre on Monday evening as jazz great Wynton Marsalis took up his trumpet.

The acclaimed musician, bandleader, composer, and instructor didn’t disappoint, jamming with members of the Harvard jazz community in an impromptu rendition of Charlie Parker’s “Now’s the Time.” The crowd roared in joy.

The performance preceded Marsalis’ conversation with Faust about music and creativity that also celebrated the release of “Music as Metaphor,” a video version now on the Harvard YouTube channel of the appearance that launched his lecture and performance series at the University in 2011. The eventual six-part program grew out of Faust’s commitment to incorporating the arts more fully into campus life, in part by bringing more performers and artists to Cambridge to engage the community directly.

Beginning in 2011 and over the next three years, Marsalis made six visits to campus for wide-ranging forays into history and culture, viewed through a musical lens. He punctuated his talks with pulsing performances that helped illustrate America’s eclectic musical heritage, the embrace of improvisation, the roots of jazz in New Orleans, the history of orchestral jazz, the relationship between American music and social dance, and song styles in popular music.

On Monday, Faust returned to a number of themes Marsalis had touched on during his lectures, including the role of improvisation. Listening and developing a “constant dialogue” is key to improvising, said Marsalis, who is managing and artistic director of Jazz at Lincoln Center.

“You are constantly reassessing where you are. It’s a challenge.”

Listening to each other is key not only in music, but in life, said Marsalis, who lamented the lack of connection he sees today between those who are more interested in their cellphones and earphones than in each other.

“We are lost in a certain way,” said Marsalis, “and we need to assess and find our way and be for real about who we want to be.”

Even with his years of experience, numerous recordings, and awards, Marsalis said he is still learning. He often takes cues from younger performers he has taught who have called him out for addressing them as if they were still high schoolers instead of accomplished musicians.

“I said, ‘Hey, I am so used to doing it, I am going to try and change it, but what you have to do is call me on it.’ And I think just like that, a year and a half or two years of them calling me on it all the time, it was educational.

“If you are going to lead, you have to lead. But you also have to learn.”

The meaning of music is profound for Marsalis. While he was able to play all of the notes from an early age, he said it took him years of practicing and studying the history of musical styles and genres and listening to great artists to grasp what it means to soar beyond the notes on the page. Understanding the music, he said, means being able to “reveal to someone how you actually feel about something.”

“The meaning is what you can perceive of the value of — the kernel, the essence of — the thing and how it relates to all of us … and if you can draw that thread then you can begin to touch people.”

The son of the renowned jazz pianist Ellis Marsalis, who at age 82 still performs on Fridays at Snug Harbor in New Orleans, Wynton showed a gift for the trumpet early. At 14 he played with the New Orleans Philharmonic. He later attended Juilliard. He performed with jazz legends and assembled a band, signed recording contracts, and eventually won honors, including nine Grammy Awards. At the same time, his commitment to jazz developed in tandem with his devotion to classical music. He has performed with leading orchestras around the world and won Grammys for Best Classical Soloist with an Orchestra in 1983 and 1984. He also won the Pulitzer Prize for music in 1997 for “Blood on the Fields,” a complex jazz oratorio.

In keeping with Marsalis’ tradition of blending discourse with performance, members of the Harvard jazz community, led by Yosvany Terry, senior lecturer on music and director of jazz ensembles, performed a selection of works before the talk.

The event also helped to mark the 10-year anniversary of Faust’s call to create a University-wide arts task force. The chair of that committee, Stephen Greenblatt, Cogan University Professor of the Humanities, introduced the performance and discussion and said the task force had embraced making the arts an “integral part of the cognitive life of the University.” In the decade since, in addition to bringing a wider range of artists to campus, Harvard has introduced curricular developments in arts practice, including an undergraduate track in architecture and the Theater, Dance & Media concentration, a number of January arts intensives, and a masters’ program at the Graduate School of Design in Art, Design, and the Public Domain.

Greenblatt called Marsalis “one of the most intellectually exuberant and generous of the great artists who have contributed so much in recent years to Harvard,” and thanked Faust for her vision for the arts and for bringing Marsalis to campus.

With his series, Marsalis offered the Harvard community not only a history of the country and culture though music, but also a “way to resistance,” said Jorie Graham, Boylston Professor of Oratory and Rhetoric, during her opening remarks.

“I mean the resistance to everything that would dehumanize us, make us deaf, or unwilling to trust our bodies’ gut-take on, yes, the truth.”

She thanked Marsalis for “not only teaching us, but showing us how to teach.”

“As the poet [Philip] Larkin said of Sidney Bechet [a founding New Orleans jazz musician], ‘On me your music falls as they say love falls, like an enormous yes, and it is greeted as the natural noise of the good.’”