Beyond the Nobel Peace Prize 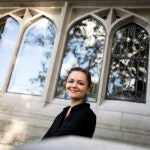 When a Norwegian committee awarded the Nobel Peace Prize to the International Campaign to Abolish Nuclear Weapons (ICAN) for its work behind a treaty to ban nuclear weapons, 3,500 miles away six people at Harvard cheered loudly.

They had reason to celebrate.

Bonnie Docherty, associate director of armed conflict and civilian protection, and clinical instructor Anna Crowe, who teach at the International Human Rights Clinic at Harvard Law School (HLS), and four law students had taken part in the treaty negotiations spearheaded by ICAN, a Geneva-based international coalition of organizations from more than 100 countries.

Supported by 122 countries at the United Nations in July, the treaty is the first to prohibit the use of nuclear weapons since 1945, when the United States dropped the atomic bombs that destroyed Hiroshima and Nagasaki during World War II.

For Docherty, who is also a senior researcher in the arms division of Human Rights Watch, last month’s Peace Prize brought attention to the treaty, reached amid increasing threats of a nuclear confrontation between the United States and North Korea.

“The negotiations were timely and urgent,” said Docherty. “It reminded the world of the need to take tangible steps for nuclear disarmament. The treaty banning nuclear weapons will make a real difference in the world.”

The agreement prohibits countries from developing, testing, producing, manufacturing, acquiring, possessing, or stockpiling nuclear weapons, but it needs to be ratified by 50 states before it can become international law. Complicating matters is the fact that the treaty has been boycotted by the world’s nine nuclear powers: the U.S., Russia, Israel, United Kingdom, France, China, India, Pakistan, and North Korea.

Students Carina Bentata Gryting, J.D. ’18, Molly Doggett, J.D. ’17, Alice Osman LL.M. ’17, and Lan Mei, J.D. ’17 took part in the negotiations and advocated for the inclusion of Articles 6 and 7, which included provisions to assist victims of nuclear use or testing and remediate the environment harmed, in the text of the treaty.

For Mei, taking part in the negotiations at the U.N. was a highlight of her time at HLS.

“Being physically in the negotiating space with all the diplomats and campaigners, that was incredibly humbling,” said Mei in an email.

Mei was especially thrilled about having registered for the International Human Rights Clinic, which is the practice arm of the Law School’s Human Rights Program, at a crucial time.

“I had just happened to be a student in the clinic during the same semester that the campaign’s efforts over the past decade were culminating to this point,” she said. “I couldn’t have imagined that I would be in a position, as a student, to play a role, however small, in something like this.”

Crowe said the students rose to the occasion despite difficulties.

“There were challenges, of course,” said Crowe. “The uncertainty of the fast-changing nature of negotiations, and not having full access to the negotiating rooms. Before the vote, it was a very anxious time.”

Of the 124 countries that attended the U.N. conference, 122 voted in favor, Singapore abstained, and The Netherlands voted against the treaty.

HLS team members said they had a front-row seat to history in the making, particularly as they listened to the moving statement by Setsuko Thurlow, 85, a survivor of the bombing of Hiroshima. She was 13 years old at the time. Honoring the more than 200,000 victims who perished in Hiroshima and Nagasaki, Thurlow said, “Each person who died had a name, each person was loved by someone.

“I have been waiting for this day for seven decades, and I am overjoyed that it has finally arrived,” Thurlow added. “This is the beginning of the end of nuclear weapons.”

The news of ICAN’s win was also welcome at Harvard Medical School, the institutional home of James Muller, a professor at Harvard Medical School and a cardiologist at Brigham and Women’s who founded International Physicians for Prevention of Nuclear War (IPPNW) in 1980. This organization, which was awarded the 1985 Nobel Peace Prize, launched ICAN in 2007.

Muller started IPPNW with Bernard Lown of the Harvard School of Public Health, Herbert Abrams of Brigham and Women’s Hospital, and Eric Chivian, a staff psychiatrist at Massachusetts Institute of Technology’s Medical Department, along with three doctors from the Soviet Union. Their effort was a collaboration between U.S. and Soviet physicians to stem the threat of nuclear annihilation during the Cold War.

“Today’s recognition by the Nobel committee is a major step forward for humanity in the struggle against the threat of nuclear annihilation,” said Muller in an email. “It is a powerful testament of our collective hope for survival and against the nuclear threats emanating from countries that refuse to destroy their nuclear arsenals.”