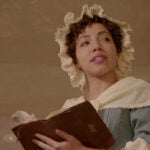 As Halloween costumes go, Disney’s Ariel and the two-tailed Starbucks’ logo are standard mermaid fare. But those wanting to explore a spookier alternative have to consider the Feejee Mermaid.

Origins unknown, the skeletal mythic creature has haunted the Peabody Museum of Archaeology and Ethnology for more than 100 years. As the story goes, P.T. Barnum purchased the original mermaid from a Japanese fisherman to feature in his circus sideshow. The Peabody’s creepy Feejee, one of several versions believed to have been created around the same time, is made from monkey and fish parts, featuring reptile claws, teeth, and clay and papier mâché filler.

All tricks, but no treats for this bare bones beauty.