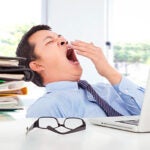 Harvard and MIT researchers have developed smart tattoo ink capable of monitoring health by changing color to tell an athlete when she is dehydrated or a diabetic when his blood sugar rises.

The work, conducted by two postdoctoral fellows at Harvard Medical School and colleagues led by Katia Vega at MIT’s Media Lab, paired biosensitive inks developed at Harvard with traditional tattoo artistry as a way to overcome some of the limitations of current biomedical monitoring devices.

“We were thinking: New technologies, what is the next generation after wearables?” said Ali Yetisen, who is a Tosteson postdoctoral fellow at HMS and Massachusetts General Hospital. “And so we came up with the idea that we could incorporate biosensors in the skin.”

A drawback of current wearable monitoring devices is that they don’t seamlessly integrate with the body, Yetisen said. Short battery life is a concern and so is the need for wireless connectivity, neither of which is an issue with the simple, color-based interface of biosensitive tattoo ink.

“We wanted to go beyond what is available through wearables today,” Yetisen said. 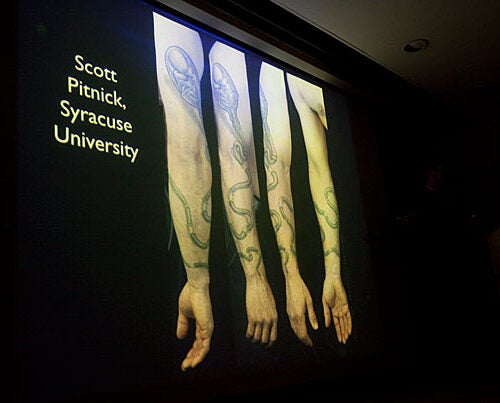 Nan Jiang, a postdoctoral fellow at Harvard Medical School and Brigham and Women’s Hospital, said the project, “Dermal Abyss,” was conducted as a proof of concept, and that further refinements — such as stabilizing ink so designs don’t fade or diffuse into surrounding tissue — would be needed for a medical product.

The Dermal Abyss tattoo inks change color according to the chemistry of the body’s interstitial fluid, which can be used as a surrogate for constituents of the blood. One ink changes from green to brown as glucose concentration increases. The team has also developed a green ink, viewable under blue light, that grows more intense as sodium concentration rises, an indication of dehydration. Researchers tattooed the inks onto segments of pig skin and noted how they changed color or intensity in response to different biomarkers.

Jiang and Yetisen said that once the bugs are worked out, the applications for biologically-sensitive ink are fairly broad. Ink could be incorporated into long-lasting tattoos for chronic conditions or into temporary designs for shorter-duration monitoring. Another possibility is invisible ink that reacts to a particular kind of light.

Yetisen has already developed an app that can analyze a picture of a sensor and provide quantitative diagnostic results. While patients are an obvious potential market, Yetisen said the technology could be used in astronauts, for whom continuous health monitoring is desirable.

Jiang said the project’s purpose was to excite artists and scientists alike about the potential for such technology, and to stimulate discussion of ethical issues it might raise, such as people’s willingness to have health information displayed for all to see.

“The purpose of the work is to light the imagination of biotechnologists and stimulate public support for such efforts,” Jiang said. “These questions of how technology impacts our lives must be considered as carefully as the design of the molecular sensors patients may someday carry embedded in their skin.”