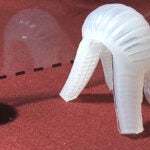 Science author Carl Zimmer drew back the curtain on an unexpected aspect of the inner lives of scientists Tuesday: their tattoos.

Once reserved for sailors and bikers, tattoos have unquestionably gone mainstream in recent decades. But Zimmer’s latest book, “Science Ink: Tattoos of the Science Obsessed,” unbuttons the secret lives of the buttoned-up science community.

The tattoos Zimmer revealed range from the expected — biologists with tattoos of DNA’s double helix — to the touching. One neuroscientist has a nerve cell tattoo that commemorates not just her chosen field, but also her father’s lost battle with Lou Gehrig’s disease. (It was this that convinced her to go into medicine.)

“Scientists have a lot of passion,” Zimmer said. “Tattoos are a sign of that.”

Zimmer, author of 11 popular science books, spoke at the Geological Lecture Hall as part of the Harvard Museum of Natural History’s author series.

Zimmer talked a bit about tattoos’ past, pointing out that the Western history of tattoos may have originated with a scientist. Joseph Banks, who conducted science as part of Capt. James Cook’s crew as he voyaged across the Pacific, reportedly got a tattoo when the crew landed in Tahiti and first saw tattoos.

Worldwide, of course, tattoos are far older than that 18th-century voyage. One 2,400-year-old mummy of the Pazyryk people bore a stylized tattoo of a deer, while one of the world’s oldest mummies, the 5,000-year-old Icemandiscovered in the Alps in 1991, has several tattoos, including a series of short vertical lines made by cutting incisions in the skin and filling them with soot.

“Tattoos are probably a lot older” than even the Iceman, Zimmer said.

Zimmer became interested in the subject when he spotted a double helix tattoo on a family friend, Sandeep Robert Datta, an assistant professor at Harvard Medical School. When Zimmer commented that the tattoo made sense because of Datta’s interest in biology, Datta explained that it was a bit more complex than that and actually encoded his wife’s initials.

Zimmer had previously encountered another scientist with an expansive tattoo depicting evolution covering his entire arm, so his exchange with Datta got him thinking. Zimmer wrote about it on his Discover Magazine blog and the emails came flooding in with people writing of backs and arms and legs covered with star formations, key moments in evolutionary history, major scientific discoveries, and chemical formulas.

“It’s interesting when your email inbox gets filled with [photos of] partially disrobed scientists,” Zimmer said. “There’s a lot of enthusiasm on one hand and a lot of horror on the other.”

Often the photos came in with a touching or witty explanation, such as the Cornell University doctoral student who had a large tattoo of fulvic acid on his back. He explained, as Zimmer recounted, that he “wanted to remind himself that there was something more painful to get than a Ph.D. from Cornell.”