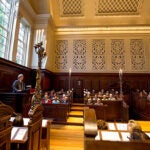 As Texas and Louisiana residents continued to reel from the devastating effects of Hurricane Harvey, many people elsewhere have felt the urge to send clothing, diapers, or canned goods to help.

“Food or clothing rarely get to the right people,” agreed Michael VanRooyen, director of the Harvard Humanitarian Initiative, who has worked as an emergency physician in more than 30 countries struck by war and natural disasters. “They rarely help, and often clog up the relief pipeline and create an economic downstream effect as well.”

On Harvard’s campus, the College’s Texas natives were organizing a candlelight vigil on the steps of Memorial Church for Friday at 8 p.m. to show solidarity with Harvey’s victims and to raise funds to help them.

Trey Sexton, co-president of the Texas Club of Harvard College, said students whose families are affected will speak at the event, and others will read statements from those trapped in Houston. The vigil will be followed by a fundraising reception, where computers will be set up to accept donations.

“We did not want to sit back and do nothing,” Sexton said, adding that the students’ response was an effort “to be conscious of what is going on, to learn how to help, and to take a moment to send thoughts and prayers to those affected.”

“The effects wrought by Hurricane Harvey have been devastating and our thoughts and prayers go out to those in Texas and Louisiana, as well as their concerned friends and loved ones elsewhere,” said Harvard President Drew Faust. “In the face of this tragedy, I am heartened by the response of volunteers in the affected areas, by the many organizations committed to providing assistance, and by the outpouring of support from members of the Harvard community eager to do what they can to help individuals with the long and arduous process of rebuilding their lives and their communities.”

The most effective relief is to donate to organizations working on the ground because they know what’s needed, recommend Arnold Howitt and Herman B. “Dutch” Leonard, founders and co-directors of the Program on Crisis Leadership at the Harvard Kennedy School (HKS), in an interview posted on the School’s website.

“There is a natural inclination for generous people to send supplies of all sorts,” wrote Howitt, who is senior adviser at the Ash Center for Democratic Governance and Innovation, and Leonard, who is is the George F. Baker Jr. Professor of Public Sector Management at HKS and Eliot I. Snider and Family Professor of Business Administration at the Business School. They jointly wrote the question-and-answer primer.

But, they added, “We don’t know exactly what displaced people need, and the task of unpacking, sorting, and routing various items that randomly arrive in the disaster area is usually well beyond the constrained capabilities of the aid providers on the scene.”

Harvey’s floodwaters have displaced tens of thousands of people in Texas and Louisiana, and damages from the storm could rival those of Louisiana’s Hurricane Katrina, which reached $108 billion. William “Brock” Long, administrator of the Federal Emergency Management Agency (FEMA), told The Washington Post that Harvey “will be a devastating disaster, probably the worst disaster the state’s seen. The recovery to this event is going to last many years.”

Because the campaign will take so long, Howitt and Leonard recommended that people wait until recovery efforts are underway to volunteer their own time: “There may be a need for volunteers to help with cleanup, repair, and reconstruction of housing, and other tasks, but we need to wait for the rain to stop, an assessment of needs to be made, and some form of organization put in place before volunteers can be most useful.”

VanRooyen recommended that people donate to reputable organizations with a local presence in the stricken area, such as the Hurricane Harvey Relief Fund, because those outlets can deliver help directly. “Funding local organizations is the most effective thing to do,” he said.

In addition, local organizations are able to put the funds to immediate use, added Theresa Lund, the Humanitarian Initiative’s executive director.

“Financial donations are the most effective way to provide relief for those affected,” said Lund.

VanRooyen said dozens of doctors affiliated with Harvard Medical School are poised to be deployed as part of the Massachusetts Disaster Medical Assistance Team. Members of the initiative’s Signal Team on Human Security Technology will travel to Texas to work with relief providers and study the use of drones in the response effort.

In another question-and-answer session, Richard Serino, former deputy administrator of FEMA and now a distinguished visiting fellow at the National Preparedness Leadership Initiative at the Harvard T.H. Chan School of Public Health and at HKS, praised the early cooperation among the responding government agencies and the public.

“One of the great things that we have seen, along with the federal, state, and the local assistance, is a lot of neighbors helping neighbors, for example, people using their own boats to rescue people,” said Serino in the interview published on the Harvard Chan School’s website.

But, he added, “The response is very much still in life-saving mode. There are still a number of people who are trapped in homes who need to be brought to safety. Anybody that’s in a flooded home, that’s trapped, and they have serious medical conditions, those are the ones that are going to be triaged and prioritized first.”

Members of the Harvard community who wish to support the relief efforts or who have been affected by the flooding can find a list of organizations working to provide assistance here.