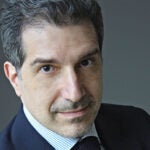 S. Allen Counter, the founding director of the Harvard Foundation for Intercultural and Race Relations and a noted neurophysiologist, educator, and ethnographer, died on July 12.

“Harvard has lost a great champion of inclusion and belonging in Dr. Allen Counter,” said President Drew Faust. “Through his leadership of the Harvard Foundation, he advanced understanding among members of our community and challenged all of us to imagine and strive for a more welcoming University and a more peaceful world. We remember today a campus citizen whose deep love of Harvard, and especially our undergraduates, leaves a lasting legacy.”

“During my years as president of Harvard, no one did more than Allen to make minority students feel welcome and at home at Harvard, to promote fruitful interaction among all races, and to serve as understanding adults to whom many undergraduates could turn in order to register their concerns, answer their questions, and have their legitimate problems communicated to the Harvard administration so that they could be understood and acted upon in appropriate ways,” recalled Derek Bok, who led the University from 1971–91 and from 2006–07. “Much of what he accomplished was unrecognized, but his contributions were invaluable, and I will always feel a great debt of gratitude for his service to the University.”

Counter did his undergraduate work in biology and sensory physiology at Tennessee State University and his graduate studies in electrophysiology at Case Western Reserve University, where he earned his Ph.D. He earned his M.D. at the Karolinska Institute in Sweden. He came to Harvard in 1970 as a postdoctoral fellow and assistant neurophysiologist at Harvard Medical School and Massachusetts General Hospital. Early in his University career, Counter lived in a student residence hall as dormitory director, resident tutor, and biological sciences tutor.

In the early 1970s, the U.S. Secretary of Health, Education, and Welfare (now the Department of Health and Human Services) named him to the National Advisory Mental Health Council of the National Institute of Mental Health. In 1975, several proposals came before the council requesting funding for projects involving psychosurgery and electrode implants in human brains. At that time, the government’s rules protecting human subjects were still evolving, and Counter believed the projects were inherently racist. He insisted the council not approve them, and they were not acted upon.

In the same decade, Counter taught inmates at MCI Concord with the Massachusetts Correctional Concord Achievement Rehabilitation Volunteer Experience, where he said he gave inmates the same advice his grandmother had given him: “Read a book. Develop your mind.” A later study showed that participants in the program had a lower recidivism rate than prisoners who did not take part.

After a sabbatical fellowship at UCLA with neuroscientist Alan D. Grinnell in the late 1970s, Counter returned to Cambridge, where his research at Harvard Medical School focused on clinical and basic studies on nerve and muscle physiology, auditory physiology, and neurophysiological diagnosis of brain-injured children and adults.

In 1981, the University established the Harvard Foundation for Intercultural and Race Relations, which promotes peace and education and supports civility, intercultural understanding, and racial harmony on campus. Counter was its first and has been its only director.

In an interview with the HistoryMakers a decade ago, Counter outlined his and the University’s vision for the foundation. “It was a new concept,” he said. “Harvard didn’t build race centers. Harvard didn’t build an Asian Center or Hispanic center, or an African-American center. We decided that we wanted a philosophy that was uniquely Harvard that we could present to our students, and then hopefully, have the rest of the country adopt it.”

That philosophy held that all Harvard buildings should be race-relations centers.

“Every building belongs to our black, our Latino, our white, and our Asian students,” Counter said in the interview. “Our students have equal ownership in them, so we don’t need to build a separate building. We want the University to respond in a way to make students feel both in Harvard and of Harvard.”

Counter was raised in a segregated section of Boynton Beach, Fla. Deeply committed to Civil Rights, he said he attended his first protest when he was a boy, as the youngest participant in a “swim-in” at a whites-only beach. He said his work with the Harvard Foundation was a product of his upbringing.

“In some respects, I am uniquely positioned to write about race,” he wrote in a yet-to-be-published book on the subject. “My own journey from a racially segregated Southern village, where race rules governed daily life, and white, state-sanctioned deprivations and circumscription prevailed, to level interaction and engagement with the white elite of the United States and Europe has given me an exceptional perspective. I have witnessed the arrogance of race. I have observed imagined white supremacy. And I have experienced the suffering of persons of color from individual and institutional racism.”

Senior admissions officer David Evans, a member of the foundation’s faculty advisory committee, said that when Counter accepted the position at the Harvard Foundation, “race relations was viewed as a no-win position, not just at Harvard, but across the nation.”

“But Allen felt someone had to do it, and so he took it on. In his work, Allen was able to win over people on conflicting issues and convince others to join in this work through his own perseverance. He was able to work magic. He gave himself to Harvard. And we are poor in his passing.”

People in the Harvard community reacted Wednesday to news of Counter’s death.

Counter’s interns at the Harvard Foundation said the director was a role model from whom they learned how to set goals and execute them, how to bring people together around a cause, and how to respect others and their opinions. Counter addressed students and everyone else by their formal titles to show individual respect and admiration.

“Harvard has lost an important moral leader and voice of positive change,” said the Rev. Jonathan L. Walton, Plummer Professor of Christian Morals and Pusey Minister to the Memorial Church. “In terms of making Harvard a more welcoming place for all students, faculty, and staff, Dr. Counter worked tirelessly for decades. And whether you were from New Orleans or New Delhi, from Guatemala or Ghana, Dr. Counter and the Harvard Foundation affirmed your humanity and your dignity. He wanted all who entered Harvard’s gates to say ‘I, too am Harvard,’ as well as ‘Harvard is me!’”

“In a world that often values self-absorption and a laser focus on one’s own priorities, Allen Counter stood out as a scholar who also cared deeply about others, both as individuals and as a community,” said Robert Lue, the Richard L. Menschel Faculty Director of the Derek Bok Center for Teaching and Learning. “This commitment to fostering a diverse community at Harvard was beautifully expressed in his tireless work leading the Harvard Foundation, and I never saw his passion for this mission wane over the 20 years that I knew him.”

“Dr. Counter devoted his life to advancing the vision of the Harvard Foundation, and many of us at Harvard College, including myself, felt personally Allen’s uncommon dignity and gentleness,” said Danoff Dean of Harvard College Rakesh Khurana. “Allen has been a thoughtful teacher, leader, and mentor to many in our community, and we are grateful for the legacy that he has left for our College.”

“Over the many years that I worked with Dr. Counter on the advisory board of the Harvard Foundation, I came to admire him for his persistent efforts at realizing one of his most passionate ideals — creating an inclusive atmosphere on campus, one that made students from diverse backgrounds feel welcome,” said Ali Asani, professor of Indo-Muslim and Islamic religion and cultures. “A strong advocate for students engaging with each other’s differences through the arts and community service, he was an untiring champion for pluralism at Harvard and beyond.”

“Dr. Allen Counter lived his life as a citizen of the world,” said Robin Gottlieb, professor of the practice of mathematics. “[He was] always on call for the celebrations and the crises, big and small, that have accompanied the increasing diversity that has been so important both personally to Dr. Counter and more generally to the health of the College.”

“It is difficult to muster words that convey a sense of what Allen’s unflagging commitment to diversity and opportunity has been, a commitment that stands at the core of the mission in the undergraduate community,” said Thomas Conley, the Abbott Lawrence Lowell Professor of Romance Languages and Literatures and of Visual and Environmental Studies. “By virtue of what he has done with the foundation, over the years we have witnessed a greater and greater embrace of diversity and outreach at Harvard College. Always smiling, always upbeat, Allen brought to us boundless, energy, enthusiasm and compassion to improve the human condition.”

“Dr. Counter truly instilled a light in the hearts of the people he mentored. We called that the foundation light,” Cemaloglu said. “It is the light of illumination about the value of diversity in our daily lives. It is the conviction that one can and should never turn a blind eye and should actively work to bring people from across communities together and address injustices. It is that firm stance that even though opposition is out there, one should move with conviction to care and act upon that care. It is that foundation light that Dr. Counter created, and instilled upon the hearts of everyone at the foundation and at Harvard.”

Named a member of the prestigious Explorer’s Club for his scientific research studies that led to the discovery of African-descended people in the rain forest of Suriname and the Andean mountains, Counter was also the author of several books: “I Sought My Brother: An Afro-American Reunion,” with Evans; and “North Pole Legacy” and “North Pole Promise,” about the North Pole explorations of Robert Peary and Matthew Henson, and the progeny they left behind.

To his students and others, Counter himself often repeated the advice given to him by his parents, Samuel Counter Sr. and Anne Johnson Counter: “Learn to speak the language of your nation and to perfect it. You learn the techniques and the underlying sort of economic structure of the nation, which means get some kind of trade or profession and pursue this with the idea of reaching perfection. And I think I’ve done that.”

Counter is survived by a wife and daughters. A memorial service to celebrate his life and contributions to Harvard will be held in the fall.