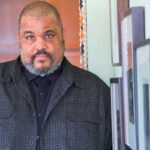 Images of Harlem, then and now

Hip-hop artist Tef Poe turned up the volume at the Harvard Ed Portal, with a concert that sent a clear message about social injustice in America.

In this episode, we interview Tef Poe, a hip-hop artist and activist from St. Louis and a Harvard fellow. We talk with Tef about the relationship between activism and music; his work at the Warren Center at Harvard; and making music at this moment in history. We also recorded Tef’s recent live show at the Ed Portal in Allston, which featured music off Tef’s latest album, “Black Julian,” as well as a song from the St. Louis group The Knuckles.

“I’m here at Harvard and wanted to bring like-minded artists I work with to the University and do something different,” said Poe during the May 20 event. “This is a great opportunity to break bread with a lot of creators in the community with the same agenda, the same goals, and the same ideas and passions.”

Poe is co-founder of HandsUpUnited, a social justice organization based in Ferguson, Mo., his hometown. He has released several albums, most recently this year’s “Black Julian.” More than 100 people attended the concert in Allston to see Poe and his fellow artists perform.

Emcee for the evening Corey Black kicked off the concert by leading the audience in singing “Happy Birthday” in memory of Michael Brown, who was fatally shot by Ferguson police in 2014. Brown’s death not only touched off protests across the U.S., but also an ongoing national debate about the relationship between law enforcement officials and African-Americans. Born on May 20, 1996, Brown would have been 21.

“Come closer, people, and let’s feel each other’s energy, this is a special night,” said Black, a spoken-word and hip-hop artist from St. Louis, who waved the standing crowd forward to the stage.

This is Black’s third time visiting Harvard, where he says he feels welcomed and embraced by a community that knows how to think freely.

“It makes perfect sense to use our arts here, a place where the vibe is completely different,” he said. “You can be open-minded and it’s OK.”

Poe said he and his fellow artists use their work to effect change in the social and political climate. By expressing their opinions though rap, spoken word, and poetry, they hope their words will not only unite people with diverse political beliefs, but also promote the importance of universities and local communities’ involvement.

“I’m honored the Ed Portal would give me the opportunity to bring what I do through the door,” said Poe, who at age 33 deeply appreciates being able to express the duality of his music and activism at Harvard. “This show and the fellowship have given me the opportunity to share perspectives people may not be used to.”

The American Democracy Project Fellowship at the Charles Warren Center was created to bring activists and academics together for two reasons, according to Professor Walter Johnson, the center’s director. First, the program gives academics the opportunity to hear and learn from front-line activists about some of the defining struggles of our times. Second, it allows universities to advance wider conversations about democracy, justice, and equality in the U.S.

“Tef has been ideal in that position. He is as humble as he is wise and as curious as he is experienced, as generous as he is brilliant,” said Johnson. “He has made every effort to participate in events and even helped us organize a terrific event bringing together hip-hop and spoken-word artists and activists from various backgrounds and struggles — South Asian, Palestinian, Asian-American, African-American — and added enormously to the intellectual life of the University.”

Johnson originally met Poe while researching the political economy in the St. Louis area, and soon invited him to Harvard. Poe is currently writing a book about the place where art and politics meet and will remain at Harvard to pursue a fellowship at the Hutchins Center for African & African American Research next year.

Justin Hansford, an American Democracy Project Fellow and incoming director of the Howard University Civil Rights Center in Washington, D.C., said Poe has the ability to take messages of empowerment and speak to community members through his music.

“He has a very valuable ability to be open, vulnerable, and accessible to the broader community when he does an event like this, especially at the Ed Portal,” said Hansford. “It’s free, they aren’t intimidated by the space, it’s a great way they can hear the message.”

Cheech Forreign, a vocalist from Jacksonville, Fla., said the night was a unique opportunity, especially because she and Michael Brown share the same birthday.

“Today is my birthday, and performing at Harvard is something I’ll always remember,” said Forreign. “I have a lot of respect for the history of the school and being at a place where I can express myself through my art. It’s beautiful.”

“I think [Poe’s] work is important in this community. To have the music and the movement visible in all different mediums is really important,” said attendee Linda Jenkins of East Cambridge.

Edward Kotomori of Allston said the Ed Portal is an incredible asset to the community. 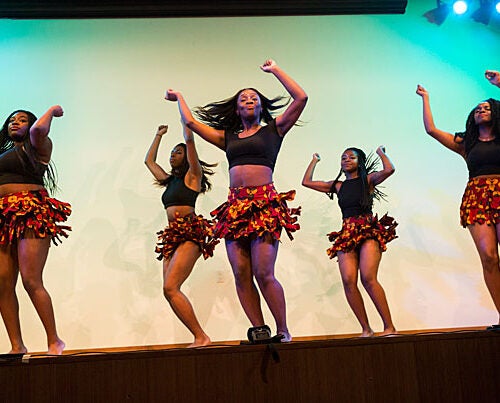 Creative momentum at the Ed Portal

“Harvard gave the neighborhood everything we wanted. Not just education for the kids, but music performances like they’re having here tonight, lectures, all of it,” he said. “I have come here since the doors opened and talk about benefits — they keep expanding and expanding. It’s wonderful.”

The Harvard Ed Portal was created in 2008 as a partnership between Harvard University, the city of Boston, the Harvard Allston Task Force, and the Allston-Brighton community. It was designed to provide arts and education programming to the community for people of all ages, backgrounds, and capabilities.

Johnson said Poe’s show was a good addition to the work already being done at the Ed Portal, a place for sharing resources, spreading ideas, and starting conversations.

Poe said this year “is the year of just being bold and assertive and doing things differently than how we’ve done them before. This show represents that.

“I just love being part of the conversation.”