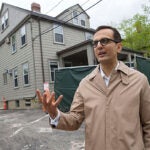 A house that produces energy

Faculty across disciplines react to withdrawal from climate accord

Though other nations appear to be standing firm on their climate commitments, and U.S. states, cities, and business leaders have reaffirmed pledges to climate goals, action by the federal government is hard to replace when it comes to such a sweeping problem, Harvard scholars say.

With a week to assess the fallout from President Trump’s decision to pull the U.S. from the Paris climate agreement, faculty members were quick to note that the withdrawal isn’t immediate — it will take years to carry out. But U.S. momentum toward a solution will be lost, along with the expertise of scientists who turn their careers to other questions.

In the days after the president’s announcement, leaders in higher education made their voices heard on the decision. A dozen research institutions issued the “Affirmation of Leading Research Universities’ Commitment to Progress on Climate Change,” which restated a commitment made prior to the 2015 Paris climate talks, when 318 institutions signed the “American Campuses Act on Climate Pledge.”

The new statement, signed by Harvard President Drew Faust as well as the presidents of MIT, Brown, Columbia, Cornell, Dartmouth, Duke, Georgetown, Johns Hopkins, Stanford, Yale, and the University of Pennsylvania, says that the transition to a low-carbon future is becoming increasingly urgent and that the schools will work toward that transition, both through sustainable operations on campus and broadly in society.

The broader picture was on the minds of Harvard faculty members in a series of conversations following the decision.

Robert Stavins, the Kennedy School’s Albert Pratt Professor of Business and Government, discussed the impact of the decision on the agreement itself and on the future commitment of signatory nations:

With the United States out of the Paris agreement, it loses the ability to pressure other countries, such as the large, emerging economies, to do more.

Worse yet, the announced departure may encourage some countries to do less than they had planned. In the worst possible outcome, the U.S. announcement might eventually even lead to the broad Paris coalition unraveling. However, initial indications from the EU, China, India, and other key parties to the agreement are that they will maintain their targets, and some may even make them more aggressive because of Trump’s shortsighted action. But only time will tell.

As President Barack Obama’s science adviser and director of the White House Office of Science and Technology Policy, John Holdren was in the thick of climate change policy efforts. We asked Holdren, the Teresa and John Heinz Professor of Environmental Policy at HKS, about how the withdrawal might affect the federal government.

Under the terms of the Paris agreement, a country announcing its intention to withdraw nonetheless officially remains a party for a further three-plus years. Thus, despite President Trump’s announcement of June 1, the United States will be a party to the agreement until late 2020.

What is most significant operationally is his statement that the United States would cease implementing the agreement effective immediately. That intention was already evident in President Trump’s multiple executive orders undoing President Obama’s climate-change initiatives, and in his proposed budget cuts for the Environmental Protection Agency, the Department of Energy, and the National Oceanic and Atmospheric Administration, among others.

The Paris agreement does not specify any penalties for failure to implement, but penalties there will be, starting with a huge loss of momentum in the federal government’s work to address the climate change challenge. That work has included, crucially, basic and early stage applied research underpinning the development of cleaner energy-supply technologies; higher-energy-efficiency vehicles, buildings, and manufacturing processes; and a smarter, more flexible, more resilient electricity grid. It has included initiatives to build preparedness for, resilience against, and adaptation to the changes in climate that are ongoing and destined to grow for decades to come in spite of whatever efforts are mustered globally to reduce emissions. It has included collaborations with and assistance for developing countries, in order to speed their progress on emissions reductions and preparedness, resilience, and adaptation. And it has included climate change monitoring and analysis to increase understanding of what is happening, what is coming, and how best to cope.

Slashing these efforts will mean many capable civil servants in all these domains will leave government, making it challenging to resurrect such efforts when more sensible leadership in the White House materializes. It will also mean climate change and clean energy researchers and analysts in national labs, universities, businesses, and independent research centers who have been supported by government funds will need to find alternative sources of support or find other things to do.

Clearly, the penalties we will all pay will include not only a slower pace of U.S. emissions reductions and resilience building — despite all efforts by states, cities, businesses, civil society, and individuals to compensate for the federal government’s dereliction — than would have been the case if the Trump administration had stayed the course, but also slower progress in developing countries that lose U.S. assistance. All this, in turn, will mean bigger changes in climate and bigger impacts on human well-being resulting from those changes, here and around the world, than needed to happen.

In addition, as many have already pointed out since the Trump announcement, the penalties paid by the United States in consequence of President Trump’s misguided decisions about climate policy, culminating in his renunciation of the Paris agreement, will include ceding moral — as well as, probably, technological — leadership on the climate-change issue to other countries. This ceding of leadership is a huge blow to U.S. standing in the world, not to mention the likely ultimate loss of competitiveness in technologies for cost-effectively meeting the climate-change challenge. One must wonder, finally, how President Trump’s unilateral withdrawal from one of the most consequential and universal international agreements in history will affect the willingness of other countries to cooperate with us on the international stage when we need them.

Edward Glaeser, the Fred and Eleanor Glimp Professor of Economics in the Faculty of Arts and Sciences and former director of the Kennedy School’s Taubman Center for State and Local Government, assessed the potential for cities and states to play a bigger role.

The ability of cities and states to take meaningful action on climate change is typically limited. The best strategies would [combine] the right, ideally global, carbon tax with enough investment in research and development. Few localities have the ability to fund significant research, and local controls on energy use can easily backfire by inducing the most energy-intensive industries to move elsewhere.

California is, however, something of an exception because of its large size, economic strength, and inherent natural amenities. California’s actions do carry weight, although they are failing in their largest environmental task: allowing more construction. Per-household carbon emissions are much lower in coastal California than in other parts of the country, primarily because of warm Januaries and relatively cool Julys.

If California environmentalists really wanted to reduce carbon emissions, they should stop opposing construction in greater San Francisco and Los Angeles. When environmentalists stop construction in coastal California, the builders and the households move elsewhere — to Atlanta, to Dallas, to Phoenix — where tougher climates lead to far more carbon emissions.

William Hogan, the Raymond Plank Professor of Global Energy Policy at HKS, is an expert on a key industry in the climate debate: electricity. We asked Hogan about consequences for the power system.

Litigation surrounding the Clean Power Plan, before the election of President Trump, created near-term uncertainty about the evolution of the power system. The additional uncertainty created by the Trump decision over the Paris agreement is relatively small, and depends on the actions of state and local governments.

The importance of the Paris agreement has to do with the symbolism and the implications for the long-term evolution of climate-related policies. A carbon tax would be a better approach than the Clean Power Plan. A strong case can and has been made for a carbon tax as part of overall fiscal reform.

Michael McElroy, the Gilbert Butler Professor of Environmental Studies at the Harvard John A. Paulson School of Engineering and Applied Sciences and director of the Harvard-China Project, has long worked on environmental issues in China. We asked for his thoughts on the idea that the U.S. withdrawal provides an opening for China to assume leadership on climate change.

The first problem is the danger that there’s going to be, in the short term, a lack of support for climate-related science in the United States. For example, U.S. scientists have had a major influence on the Intergovernmental Panel on Climate Change. Many of the scientists come from government institutions — NOAA, NASA, and so on. Their travel and expenses associated with actually attending those meetings are supported by the U.S. government. I would be concerned that this administration will cut off that kind of support and so, in that way, leadership is going to be ceded to other countries, including China.

That this action was taken to protect U.S. jobs is absurd. There is no implication for U.S. jobs in the Paris agreement. Is this going to provide more jobs for the coal industry? I don’t think so. The coal industry has been on its way down for 50 years, in terms of employment. Another question is whether we’re going to see a lack of support for renewable energy at the federal level. Renewable energy is a growing market and, as many people have pointed out, the investment in renewable energy in the United States has created more jobs than essentially anything else in the last few years. Are we going to see the new energy economy dominated by companies that have larger level of support in their home countries than in the United States?

China, it seems to me, will view this as another example of inexperienced leadership at the presidential level in Washington, a recognition that this is not the way it was in the past, when you had professional leadership with an understanding of international issues. And maybe that this administration, at the highest levels, is not particularly reliable.

In terms of climate change, I would think there would be no particular change in Chinese policy. Three factors drive Chinese policy. One is dealing with the air-pollution problem. Second is energy security. China does not have unlimited supplies of coal and is a major importer of natural gas and oil. Third is climate change, and they all come together in some sense.

It also has important foreign-policy implications because China is becoming a major investor in nuclear power in other parts of the world. It’s using its domestic expertise, which it largely got from Westinghouse, to build an international market for the Chinese nuclear industry, as it did before with solar.

In the near term, we need to encourage expanded private-sector involvement in these issues. It also places a serious responsibility on us in terms of education. We need to really make sure we’re providing an honest, broad, scientific analysis of what the challenges are and what the problems are and what the opportunities are.