Feeling the impact of fracking 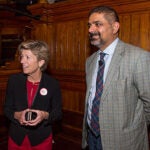 For IT Summit, a focus on innovation

In his autobiography, the legendary frontiersman described jumping over “earthquake cracks” in his home state of Tennessee while pursuing a bear one night in 1826. Conevery Bolton Valencius was struck by the reference.

“I thought, ‘What in the world is this about earthquakes?’” remembers Valencius, an environmental historian and Boston College professor. “How could it be that I got a Ph.D. in history and I study this part of the world and I don’t know much about this? So I started asking.”

Those questions led to “The Lost History of the New Madrid Earthquakes,” Valencius’ 2013 book about violent tremors that rocked the central Mississippi valley between December 1811 and March 1812. In the course of her research Valencius noticed online posts from people worried that hydraulic fracturing, or fracking, would “set off the New Madrid fault and crack the United States in two.” Again, she wanted answers.

Fracking involves drilling holes deep into layers of subterranean shale and then pumping in millions of gallons of water, sand, and chemicals to release oil and natural gas trapped in the rock. In some shale formations, a large volume of toxic water comes up along with the hydrocarbons. The injection of the wastewater from the process back into the earth can trigger seismic activity, scientists say.

According to the U.S. Energy Information Administration, there were approximately 26,000 hydraulically fractured wells for natural gas in the United States in 2000. By 2015, the number had grown to 300,000.

While at the Radcliffe Institute for Advanced Study Valencius has been working on a book that explores what’s known and what’s not about earthquakes caused by fracking’s deep-level wastewater injection wells. (She also found a co-author during her fellowship, connecting through Radcliffe colleagues with Anna Kuchment, a contributing editor for Scientific American and a staff writer for The Dallas Morning News, who has covered connections between fracking and earthquakes for years.)

Studies conducted over the past decade have documented close correlations between wastewater injection wells and earthquakes, Valencius said. The findings indicate that the massive amounts of water pumped into the earth create intense pressures that can trigger a fault.

“These models of increasing specificity and sophistication help us explain the apparent correlations that we are seeing,” said Valencius, Radcliffe’s Katherine Hampson Bessell Fellow. “There is debate about many aspects of that science, and it’s still not clear how we understand the impact of any one well, much less any one injection, but it is very clear that the practice of pumping massive amounts of fluid back deep into the earth is creating zones and pressure that is moving the earth itself.”

In March 2016, the USGS included human-induced seismic activity in its assessment of future earthquake hazards for the first time. The six states listed at the greatest risk, from highest to lowest, were Oklahoma, Kansas, Texas, Colorado, New Mexico, and Arkansas.

In a 2015 statement, the Oklahoma Geological Survey said it “considers it very likely that the majority of recent earthquakes, particularly those in central and north-central Oklahoma, are triggered by the injection of produced water in disposal wells. The primary source for suspected triggered seismicity is … the injection/disposal of water associated with oil and gas production.”

Valencius hopes readers of her next book will heed the science.

“We’ve got to listen to the scientists and we need to stop being simplistic about what they say,” she said. “The fact that scientists disagree about certain aspects of a model does not mean that somehow they don’t know what they are talking about … we misunderstand healthy scientific debate as casting more profound doubt than it does.”

Open questions remain about the relationship between hydraulic fracturing and earthquakes, the potential for fracking to contaminate groundwater, and fugitive emissions — natural gas that escapes into the atmosphere during fracking from holes in aging pipelines or the burning off of gas in order to test well pressure. Valencius insists she isn’t a crusader against the industry. Done correctly and safely, she thinks the practice could help lower the country’s carbon output.

“It’s not anti-energy to say we have to do it right if we are going to do it. Too often any questions raised about the safety of energy resources are treated as if they are an attack on the whole industry. That’s mistaken and it doesn’t help us get where we need to go.

Valencius’ personal experience has helped her understand the importance of preparedness. On Oct. 17, 1989, at 5:04 p.m., she was a recent college grad on the seventh floor of a San Francisco office building when the floor started to move. Her colleague was on the phone with someone south of the city who felt the tremors first. “I heard him say to the person on the other end of the line: ‘What do you mean? What’s shaking? What are you talking about?’ And then we started shaking.”

The 6.9 Loma Prieta earthquake in Northern California killed 63 people, injured thousands, and sparked Valencius’ respect for “the power of the earth’s movement” and for the havoc of shifting tectonic plates even in a well-prepared region. In areas that are increasingly susceptible to earthquakes due to fracking, Valencius worries “they are not prepared at all.”